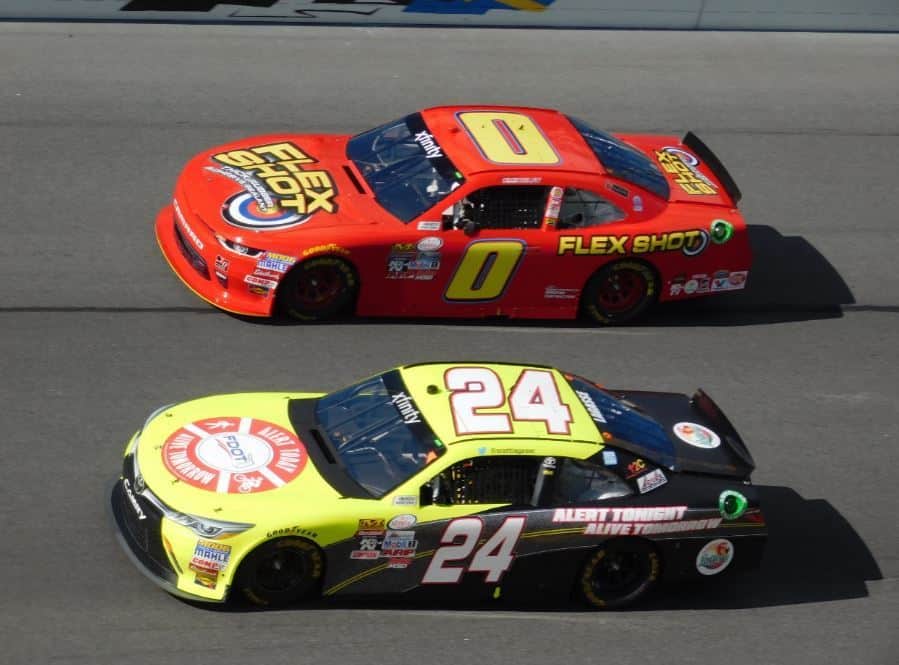 Opening weekend of the 2017 NASCAR season treated Scott Lagasse Jr. well. He started the weekend replacing Justin Haley in the Camping World Truck Series race because the 17-year-old is not old enough to compete on tracks over one-mile long. Then he competed for JGL Racing in the XFINITY Series, picking up top 10s on each day.

On Tuesday, Richard Childress Racing announced it had signed the 36-year-old to pilot the No. 3 XFINITY Series car in four races beginning at Iowa Speedway in June, followed up with a pair of road course races at Road America and Mid-Ohio Sports Car Course. He will end the season at Homestead-Miami Speedway, hoping to capture the owners’ championship for RCR.

When Lagasse takes over the No. 3 car in any division of NASCAR, it will be the first time since the number was re-introduced to the sport in 2009 that someone outside of Richard Childress’ family has driven it. Back then, Childress went to Dale Earnhardt Jr. for his approval of bringing back his number due to the prestige that his father had on the sport.

But what people don’t know is Earnhardt would likely approve of this announcement as well.

Lagasse has competed part-time in NASCAR since 2005, competing in 61 XFINITY and 26 Truck Series starts. His seventh-place finish for GMS Racing on Friday night was his fourth top-10 result in the Truck Series. But his sixth-place effort in the longest XFINITY Series race ever at Daytona was a career-best.

“It’s been a wild weekend, great weekend though,” Lagasse told Frontstretch after the opening XFINITY Series race of 2017. “To cap it off with two wild, but good runs is perfect. You always want more, but you have to be happy with how today went and how we finished it off. I had a great group on both sides that helped me and I appreciate that.”

Prior to Saturday, Lagasse had competed in 10 races at Daytona with a best finish of 18th coming in July of 2009 with CJM Racing, owned by Bryan Mullet. It was only his third time in his career that he had finished on the lead lap at the superspeedway, accumulating four DNFs due to crashes.

Admittedly so, Lagasse never performed well on the plate tracks, but Saturday was different. Sure, the racing was different as well because it became a game of Survivor with three crashes piling up over nine cars, including a 19-car demolition derby on Lap 24.

Lagasse was involved in another big crash coming on Lap 29 that took out the likes of Justin Allgiaer, Daniel Hemric and pole-sitter Brandon Jones. However, the No. 24 machine was only beat up on the right side after getting into the wall. Fortunately for him the car was repairable.

“You pay attention to the veterans of this sport and you ask them questions,” Lagasse said of how he survived the carnage. “The neatest thing about this sport is there are some really cool veterans that will help you. I try to take it in and learn from them and it seems to work.”

One of those veterans Lagasse has gone to in the past is Earnhardt. He credits NASCAR’s Most Popular Driver for his advancement on plate tracks.

“The first time I ever race on a plate track, I hated it,” Lagasse said. “I thought it was all car and no driver. I had the opportunity to go out and practice with Dale Earnhardt Jr. and spoke with a couple guys. Afterward, I went over and asked him questions, he probably doesn’t remember it, but I had a list of questions on my mind that I was going to ask him.

“I was expecting to get a heck no, leave me alone type deal, but he sat there for 45 minutes in the bus and told me everything he was going to try to do to win the race that day and be darned if he didn’t do it.”

The conversation happened in 2009. At the three plate races that season, Lagasse had finishes of last, eighth and the aforementioned 18th.  That season he competed in 21 XFINITY Series races, the most races he’s even run in one year in any division of NASCAR with Paul Wolfe as crew chief.

Eight years later, working hard has come full circle for Lagasse. Maybe because of his runs at Daytona to begin the season or possibly because he is expected to bring sponsorship to the table, he is going to get his best opportunity of his NASCAR career.

Ty Dillon is expected to compete in the No. 3 car for 27 races, essentially every week that the Cup and XFINITY series race at the same track besides Homestead.