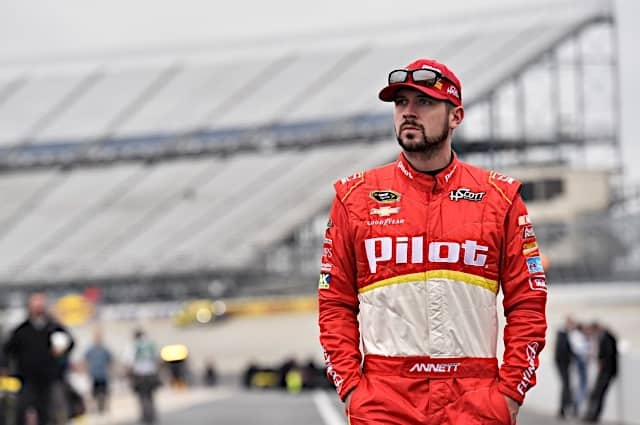 While sitting on a fan zone stage at Daytona International Speedway, an inexperienced XFINITY Series rookie Michael Annett was put alongside Dale Earnhardt Jr. for the first time.

Now, less than 10 years and tens of thousands of laps later, Annett will see Earnhardt not as a rival, but as a car owner in the NASCAR XFINITY Series in 2017.

“We really didn’t have that big of a relationship,” Annett said. “Not a bad one, just not a whole lot of communication. In the offseason, getting to know him and his organization, has been a lot of fun and has made this season even more exciting.”

Making his return to the  XFINITY Series this year with JR Motorsports, there isn’t much the 30-year-old hasn’t experienced. From the Camping World Truck Series to five full-time XFINITY seasons from 2009 to 2013, the highest of all was three years in the Monster Energy NASCAR Cup Series from 2014 to 2016.

Despite reaching the premier series, however, Annett’s struggle to find speed with Tommy Baldwin Racing and HScott Motorsports took a major toll on his confidence level.

“Taking the blows I did and the humbling experience in the Cup Series,” Annett said, “no matter how the cars drive, I think being at that level of competition coming back to the XFINITY Series is going to be a big benefit.

“Being at the pinnacle of our sport, you make it to the top and you feel like you’re there. Then, you take a step down. Definitely, I’m going to miss just being in the premier series of our sport.”

With only six top-20 finishes through 106 Cup Series starts, Annett’s hard work and labor was overlooked and, ultimately, led to little recognition.

“I think [confidence would dip] would for any racecar driver. Sitting on my couch on Saturdays and watching what my teammate Justin Allgaier, who was my teammate [in Cup] the year before, watching him bounce back and show success. That really made me sit back and say ‘Maybe, it isn’t just forgetting how to do this. Maybe it’s just being in the right team, right equipment.’”

Following a difficult Cup season, Allgaier took that courageous step down to XFINITY with JRM in 2016, a move Annett watched with close eyes while he contemplated a new home in 2017.

“I put Justin and I right there together,” he said. “It wasn’t so much on how he performed [in 2016], it was more of looking at teams I felt I could go to and have success right away. It is a rebuilding year. It has to happen right away. We don’t a lot of time to drag our feet, we have to be fast right out of the gate.

“Watching the whole sport and where I thought that rebuilding year and confidence-building year could be. Looking in the XFINITY Series, it just made more sense than some of the rides available in Cup.”

For 2017, Annett’s days of struggling with a mid-pack team will be no more, as JRM has proven to be a championship-winning organization while fielding three or more cars. This year, Annett is ready to prove himself as a valuable driver.

Piloting the No. 5 Chevrolet alongside teammates Allgaier, Elliott Sadler and rookie William Byron, Annett is aware that he needs to perform right out of the gate.

“Otherwise, you do have to sit back and rethink things,” he said if the results are not there. “I use the word humble. I’ve been humbled the last three years. I think from where I left three years ago to where I am now, definitely more mature, a better head on my shoulders and just respect the sport a lot more than I did.”

With an experienced poise mixed with a determined drive to justify his worth, Annett will have his most pressure-packed season yet. But don’t think he’s scared for a challenge.

“If I don’t meet my goals, there is definitely going to be a lot of disappointment for sure. That’s the mindset I have and I think that is what puts the pressure on. I don’t think I could be at any better of a place than JR Motorsports.”

[Below is a video capture of our conversation with Michael Annett.]

Not to put down Michael Annett, but isn’t his dad the majority owner of Pilot/Flying J, his sponsor. That should be in this story. His dad has been a big supporter in racing for years. He sponsored Sammy Swindell’s TMC sprint car in the World of Outlaws. I’m sure there were others. So Michael has been around racing for years.
Bring home that XFINITY Championship.