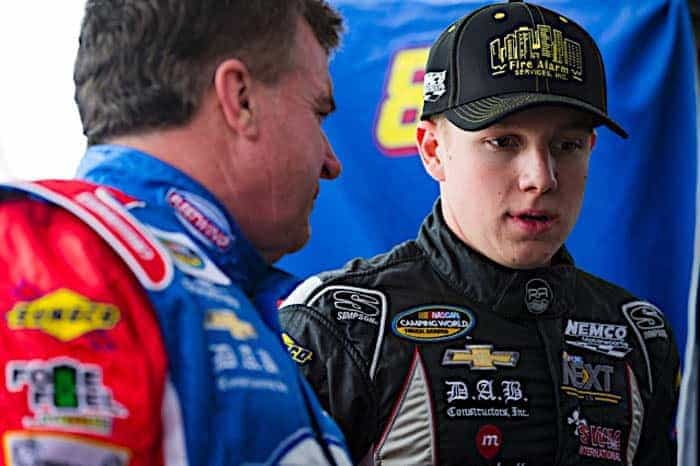 A month prior to NASCAR’s season-opening weekend at Daytona International Speedway, Joe Nemechek announced that he would join his son John Hunter Nemechek to race in the first three Camping World Truck Series events of 2017.

Coming out of Daytona, both Nemecheks finished in the top five, with John Hunter leading the charge in fourth. Despite having roughly 10 to 11 full-time employees, NEMCO Motorsports has risen through the ranks of the Truck Series, trying to become one of the elite teams in its division.

“The off-season was really, really busy,” Joe Nemechek told Frontstretch about preparing for 2017. “We had to do a lot of work on the trucks we have, plus trying to re-body trucks and improve trucks, doing. There have been so many issues. When we threw the couple races that I’m going to be running in at the beginning of the year, it really added that much work into it.”

Nemechek’s race team has been a part of NASCAR in some sort of fashion since 1989, which included his first race at Rockingham Speedway in the XFINITY Series, where he finished 33rd. For nearly three decades, NEMCO – then Nemechek Racing – has been doing a lot with a little.

In recent years Nemechek’s focus has been put on younger drivers, most importantly to him, John Hunter. The 19-year-old has been around the sport since 2013. However, NEMCO is coming off its first two-win season in any of the top three divisions of NASCAR since 2003 when the elder Nemechek won three races in the XFINITY Series.

The father-son duo is trying to build NEMCO into a powerhouse of sorts, and for the most part doing it out of their own pockets.

“Nobody in the garage will outwork us as far as working on the trucks,” Nemechek said. “I know everyone in the garage works hard on their stuff, but when you are really limited on funding and you only have so many people, it makes it that much more difficult. We have to work really hard to be competitive.”

But with the elder Nemechek competing in the next two events, Atlanta Motor Speedway this weekend and Martinsville Speedway April 1, the quality of equipment is spread among the pairing. NEMCO Motorsports has between 11 and 12 chassis in its stable. Overall, there are more trucks than there are people, which is why the owner has made sure the priority is straight to his employees.

“I think the priority is making [John Hunter] run as good as he can,” Nemechek said. “He’s the future of our sport. I know he won’t be driving for me forever. He’s going to get picked up by a good team somewhere, but as a father and as a business guy, he’s got unbelievable talent that you don’t see every day. I’m doing everything I can to let him show what he has.”

In 54 career Truck Series starts, John Hunter has three victories, 15 top-five finishes and 28 top 10s. Though he has competed in at least one race in each of the past five seasons, 2016 was his first full season in the series. However, the team owner thinks the best is yet to come.

“I think he’s done exceptionally well with the resources that we have,” he said. “We work hard with what we have, and hopefully this year is going to be an all-star year for him. We do a lot with a little.”

Despite finishing last of the Chase eligible drivers in 2016, Nemechek believes that his son will take the next step this year. Providing the equipment is sufficient, the 20-time NASCAR winner believes his organization can be one of the best in the series.

In order for NEMCO to elevate its program further, Nemechek believes the team will need more dollars. His engine for the race at Daytona was rented from another team, and throughout the year the organization will be running older Chevrolet-version engines, hoping it can match the standards of the top-tier teams.

In Nemechek’s mind, in order to compete with the big teams such as Kyle Busch Motorsports, GMS Racing and ThorSport Racing, NEMCO needs to acquire some sort of sponsorship. John Hunter’s No. 8 truck currently has half a season worth of sponsorship, while the other half is waiting to be sold.

At their core, the Nemechek family is hard-nose racers. Though NEMCO doesn’t yet have the sponsorship it needs to purchase newer equipment, there are no excuses in 2017. The organization expects to be competing at Homestead-Miami Speedway in November with a chance at the championship.

“I’m expecting to win some races,” Nemechek said. “I think we can win some races. We just have to keep working at it. There is nothing easy. All the teams keep improving each and every week and we will continue to do the same thing.”