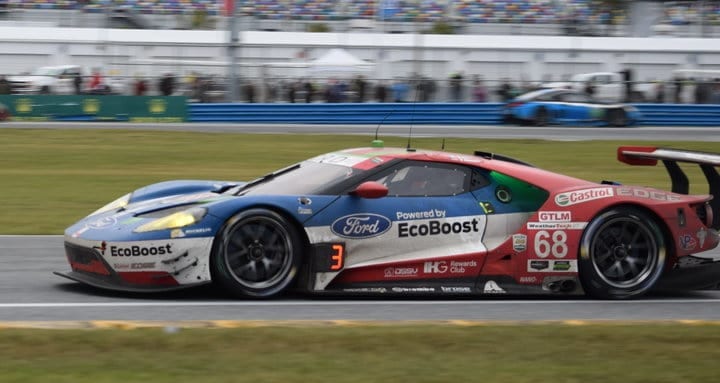 On Thursday afternoon, Ford Chip Ganassi Racing announced that they will be fielding three Ford GT’s in the GTLM class in the Mobil 1 12 Hours of Sebring on Mar. 18.  Joining the two full-time entries will be the No. 68, which will again be piloted by Billy Johnson, Stefan Mücke and Olivier Pla.

Team owner Chip Ganassi is happy to have an additional car at Sebring.

“This is another great opportunity for our WEC and IMSA teams to work together as the opportunity to data share is invaluable,” Ganassi stated in the team’s press release.  “There are not a lot of opportunities for us to get together, so when we have the chance we will always try to take advantage of it.  Plus, to be able to bring another car to a legendary endurance event like Sebring is something special to all of us.”

While the IMSA WeatherTech SportsCar Championship is already underway, the FIA World Endurance Championship doesn’t get underway until next month at Silverstone.  Regardless, Sebring is only 12 days before the WEC Prologue, a  test session that is being held at the Autodromo Nazionale Monza in Italy.  According to Dave Pericak, the Global Director of Ford Performance, Ford’s WEC entries will already be ready to go for the Prologue by that time.  Getting the WEC Ford GT’s back to Europe and properly prepared for Monza would be a substantial undertaking.  While it was not explicitly stated in the press release, it appears that the No. 68 entry will be a chassis that is already based in the United States.

Ford is coming off a class victory at Daytona for the No. 66 of Sébastien Bourdais, Joey Hand and Dirk Müller.  The European-based No. 69 entry of Tony Kanaan, Andy Priaulx and Harry Tincknell was fifth in class while the No. 68 was seventh.  Only the No. 67 of Ryan Briscoe, Scott Dixon and Richard Westbrook finished off of the lead lap.