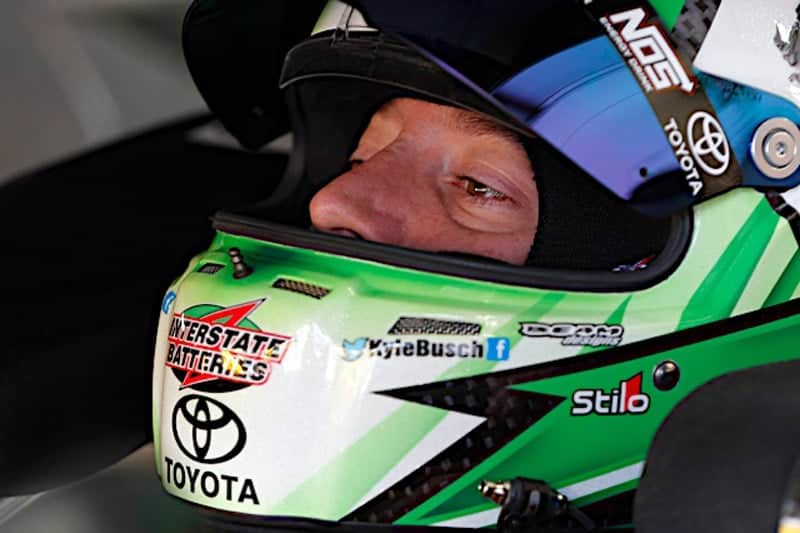 Though he didn’t lead the most laps in Saturday’s Rinnai 250, Kyle Busch pushed hard when it counted on the final restart to win at Atlanta Motor Speedway.

The victory, his first of 2017, is the 87th of his XFINITY Series career and second in a row at Atlanta.

“Scott [Graves, crew chief] made some great calls to get me the grip I was asking for,” Busch said. “It’s a refresher course every year to run on Saturday. I did learn a couple things I may have forgot about. Hopefully I can use them in my Cup car.”

Brad Keselowski won the first stage of the afternoon and led 53 laps but was unable to get by Busch in the final 16 laps and had to settle for second spot.

“With slower cars, it’s always a game of cat-and-mouse,” Keselowski said. “It sometimes feel like chicken. I kept catching them in the wrong damn place, I thought that kept me from getting a run on Kyle.”

Keselowski still learned a few things for Sunday’s Monster Energy NASCAR Cup race, including an important note on restart lines and the struggle of the outside lane.

“It will be a big concern,” Keselowski said. “It should be a huge hindrance. Everybody knows that going in, it’s one of the major flaws in the double-file restarts. You know that and you hope it doesn’t affect you at the wrong times.”

Kyle Larson came home third followed by Kevin Harvick, who led the most laps [64] before falling to fourth after a poor last restart.

Rookie Matt Tifft finished 12th and  mirrored Keselowski’s statements on how difficult the outside lane was throughout the day.

“From the inside, we had some really good restarts,” Tifft said. “Then, outside restarts I struggled. It’s just a hit-or-miss deal up there. There is just no grip.”

Kicking off the race with a bang, the 163-lapper saw series regulars Ty Dillon and Blake Koch crash in Turn 2, ending the latter’s day on Lap 2. They were not the only ones to suffer some damage, as Brendan Gaughan, Daniel Hemric and Ryan Reed hit the wall throughout the race.

Denny Hamlin had multiple tire problems ruin his day, including a blowout with 45 laps to go. The Joe Gibbs Racing driver finished 20th, the lowest of the eight Cup drivers in the field.

I turned the race on while the broadcast was still in the pre-race part of the show, and saw that Kyle Busch had the pole. Noticed that there were about 500 people in the stands, IF THAT! That was it for me I turned the race off. When I logged onto Jayski and saw the results, I was glad I didn’t waste my afternoon watching that farce.

Only Kyle Busch fans were watching the Busch league “race”.

These races are ridiculous. There are eight Cup drivers in the field: Kyle Busch, Ty and Austin Dillon, Brad Keselowski, Aric Almirola, Kevin Harvick, Denny Hamlin, and Kyle Larson.
After Qualifying 3 Xfinity drivers went home and ALL THESE CUP DRIVERS GET TO RACE, THOSE 3 DRIVERS DON’T MAKE BIG MONEY LIKE CUP DRIVERS AND COULD USE THE MONEY MORE THEN THESE CUP DRIVERS TO KEEP THEM GOING.
Kyle Busch wins the pole so you have a VERY GOOD IDEA HE WILL PROBABLY WIN THE RACE AND GUESS WHAT, HE WINS THE RACE BUT DIDN’T DOMINATE RACE, BUT ONLY CUP DRIVERS LED ALL THE LAPS.
KEVIN HARVICK 64 LAPS LED, BRAD KESELOWSKI 53 LAPS LED, KYLE BUSCH 26 LAPS LED, KYLE LARSON 20 LAPS LED. HOW F**KING PATHETIC!!!!!
These new rules isn’t going to make any difference.
CUP DRIVERS WILL DOMINATE ALL YEAR IN THE XFINITY SERIES