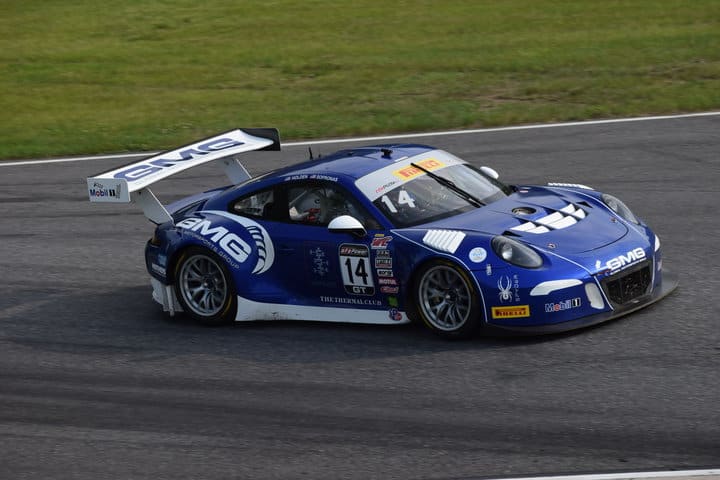 In Pirelli World Challenge, the replacement of GT/GTA/GT Cup sprint races with Sprint-X events for standalone weekends has created opportunities for teams to bring in ringers to fill out lineups.  For instance, Cadillac Racing has already announced that they’re bringing in the Taylor brothers for the Sprint-X races.  With the addition of Vanthoor, GMG Racing is making a similar splash.

Sofronas is quite excited about his Porsche program for 2017.

“It’s great to be back in the Pirelli World Challenge for another season,” Sofronas stated in a press release.  “It’s incredible to think of how the series has grown over the years, and it’s been an honor to be a part of it. Our business has grown with it of course, and 2017 looks to be a great continuation of that. Last year we really enjoyed working with the current iteration of the Porsche 911 GT3 R in its first year of development, and headed in to this year we have a very good understanding of what to expect. Of course a big part of that is our relationship with Porsche Motorsport North America, and the addition of Laurens Vanthoor for our opening two SprintX events is a huge demonstration of our mutual commitment to one another. Porsche has been a big part of our business over the years, and bringing in such a talented co-driver is a great opportunity for everyone. I’m really looking forward to St. Petersburg and it should be a great race.”

While Vanthoor is new to Porsche for 2017, he has a very strong resumé in recent years.  Racing as a factory driver for Audi, Vanthoor won the 2013 FIA GT Series championship, the 2014 Blancpain Endurance Series Pro Cup championship and last year’s inaugural Intercontinental GT Challenge, a series of three GT3 endurance races.  Vanthoor also won the FIA GT World Cup last year at Macau.  However, that race was a bit of a wreckfest that ended via a red flag and countback after this crash.

Vanthoor is taking on his duties with GMG Racing in addition to his full-time ride in the No. 912 Porsche 911 RSR in the IMSA WeatherTech SportsCar Championship’s GT Le Mans class.  There are no conflicts between the WeatherTech SportsCar Championship and Pirelli World Challenge’s schedules.  However, there are other clashes of note.  For instance, the Lime Rock Sprint-X weekend is a direct clash with the 24 Hours Nürburgring in Germany.