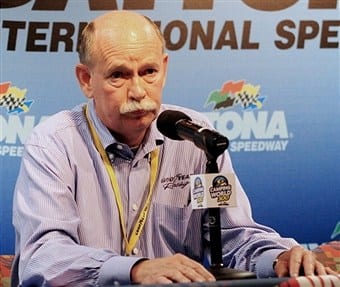 Prior to the Folds of Honor 500, Frontstretch spoke with Stu Grant, general manager of world-wide racing, from Goodyear. He updated the media on the investigation into the tires off of the rear of the No. 18 car of Kyle Busch from the Daytona 500. The tires were analyzed at Daytona International Speedway and then taken to Akron and further dissected by the forensic team at Goodyear’s headquarters.

The initial investigation at Daytona yielded no conclusive evidence of a cut in either of the rear tires. When the forensic team in Akron inspected the tires microscopically, they were still unable to find any evidence of a cut. Goodyear inspected video from the FOX broadcast and the right rear tire clearly showed it was fully inflated until the car slid down the banking and wore through the entire surface of tire. The broadcast video did not provide conclusive evidence on the left rear tire. As a result, Goodyear requested and received additional footage from NASCAR. In analyzing the NASCAR footage, the left rear tire was inflated until it was contacted by another car, which caused it to pull from the rim and fold over.

Goodyear shared their findings with the competition leaders at Joe Gibbs Racing. There has been no official response from the team.

Sounds like Kyle overdrove into the corner trying to get past the lapped cars (my first thought). Not like he hasn’t done that before. I guess DW was trying to protect his baby Kyle.

Baby Kyle never does anything wrong. He’s the absolutely WORST example of what is supposed to be a professional driver. This punk should have had his face slapped by his mother when he was 8. Disgusting.

Me thinks Goodyear doth protest too much! Let it go. It was just another prima donna driver blaming someone else for their wreck.

Sam must be having a tough time deciding who the bigger baby in the family is.