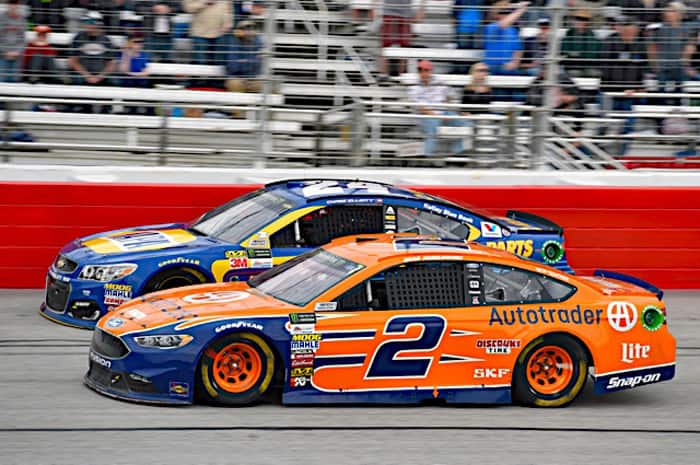 As is sometimes the case in NASCAR, and really, in any form of auto racing, the driver with the best car doesn’t necessarily win. That was certainly the case in Sunday’s race at Atlanta, where Kevin Harvick had the field covered plus some, only to have a late race mistake cost him a victory. Those are the kinds of things that happen in these races and if anything, is just another lesson on why if there isn’t a lot of hope, you still can’t give up.

HOT
One of those drivers who over his career has always had a never give up attitude is Brad Keselowski. He’s not always been the most well-liked driver, but no one could ever question his competitiveness. So, when Harvick had to serve a penalty for going too fast on pit road, it was Keselowski who took advantage of it for his first win of the young season. That never give up style was important in this race for the No. 2 team as Keselowski went a lap down early as he had to make an unscheduled stop for a tire issue. But he eventually found himself back in the top 10 in the final 100 laps, and then passed Kyle Larson in the final 10 laps for the win.

I don’t always agree with what Darrell Waltrip says on the FOX broadcast, but this time he had a valid point about those final laps. Why did Kyle Larson try racing the high side when it was apparent that the low side was the fastest way around on Sunday? It’s true that Larson loves the high lane and as he said, he can usually make that wok at most tracks. But you’ve got to wonder about Larson’s judgement here. If he had stayed low and made Keselowski pass on the outside and lost, then OK, at least he would’ve lost making Keselowski take the long way around. However, to stay high and open the door for Keselowski is just something that can’t be done there.

HOT
That’s two races and two wins for Ford drivers to start the season. And it should have been two races two wins for Stewart-Haas drivers to start the season. But nonetheless, while Stewart-Haas’ switch to Ford was an eyebrow raiser for sure, it looks like the right move for that team and Ford as well. Ford had four of the top nine finishers Sunday and seven of the top 13. Just what they do on other tracks, we will have to wait and see, but it’s certainly better to be 2-0 on the season, than the other way around.

NOT
Trying to slow a race car from 180 mph to 45 can be quite a task and as Harvick and nine others proved Sunday, it was too difficult a task at times at Atlanta. Teams and drivers are always running on the edge to get every slight advantage they can, or in this case, to not give some type of extra advantage to any other teams. So, when Harvick got caught speeding on what turned out to be the final yellow flag pit stops of the day, it’s just a reminder of how hard it is to win one of these things and how important it is to not make mistakes in the late stages of a race.

HOT
While it didn’t translate into a bunch of lead changes as Harvick was completely dominant for most of the day, the new low-downforce rules package is a positive step in the right direction. To see the cars sliding around and drivers having to play with the steering wheel to get the car where it was supposed to go was a good thing. Sure, the teams with the best equipment and engineers will always be the favorites, but it was good to see the drivers have at least some control over the outcome of a race. So while you can’t give the new downforce package rave reviews off this race, it’s certainly worth waiting to see what happens at other tracks.

NOT
There was news this week that Las Vegas is trying and most likely will get a second NASCAR Cup race on its schedule. Of course, there is money involved, but let’s hope it doesn’t take a race away from a track where the racing is already good. The indications are it will be a fall race, and if happens to be a Chase race let’s hope it’s Kansas. Because really, as far as what happens on the race track, there’s not much difference between Kansas and Las Vegas. Yes, off the track there is probably a huge difference, but as far as the racing goes, let’s hope we don’t see the elimination of a race from one of NASCAR’s long-time traditional tracks.

Harvick lost because his car was to fast, if you know what I mean.

come on Wolfe…you know Kansas (ISC) will not lose a race to Vegas (SMI). The track being targeted is New Hampshire (SMI)….