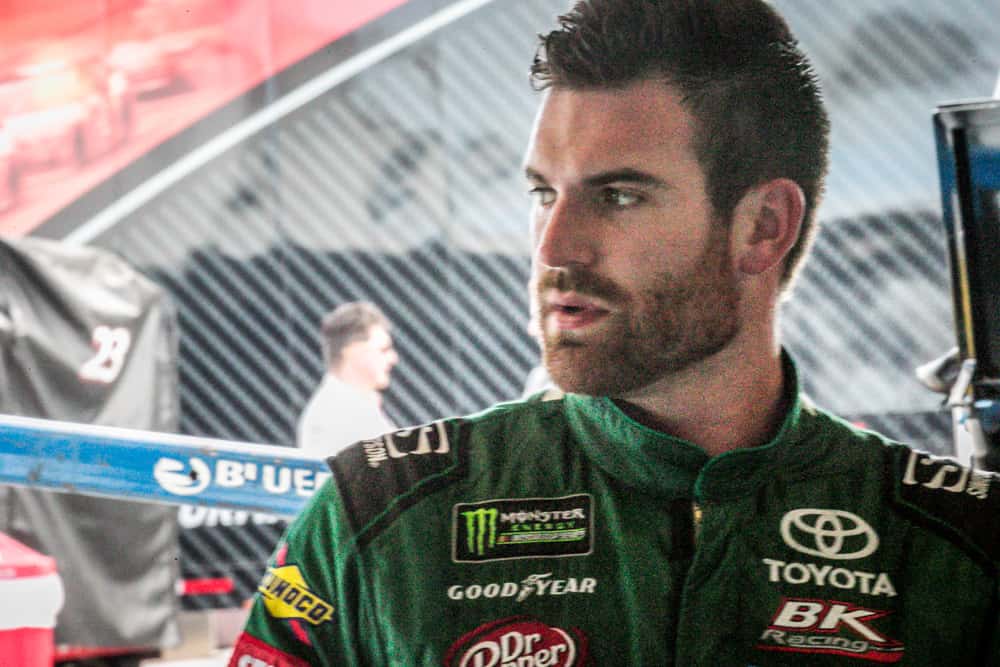 He may have been raised by a NASCAR champion, but Corey Lajoie hasn’t had an easy ride in NASCAR.

Heck, just two years ago, the 25-year-old didn’t even have a NASCAR license while he found no luck in his sponsorship hunt.

But after a head-turning partial XFINITY Series schedule last year with JGL Racing, including back-to-back top 10s at Bristol and Dover, Lajoie started gaining traction toward a step up to the Monster Energy NASCAR Cup Series in 2017.

Being signed part-time with BK Racing for this season, Lajoie is well aware that the fight for recognition doesn’t end here. Speaking with Frontstretch on the morning of the Daytona 500 in February, Lajoie talks about his sponsorship struggles and how he got his opportunity with BK Racing.

Zach Catanzareti, Frontstretch.com: Here you are at Daytona. Just talk about your feelings right now.

Corey Lajoie: Ah man, elated. I worked my entire life to try and be a Cup driver. It’s been a tough road, a tough go of it. I just needed a good shot and Ron Devine of BK Racing gave me that shot. I had to come down here at Daytona to try and make the Daytona 500, here we are.

Catanzareti: You were away for a while. What have you been doing since the last time you were in a Cup car?

Lajoie: I drove that Cup car in 2014 for those two races. 2015, I didn’t race one time. I didn’t even have my NASCAR license just because I didn’t have any money, couldn’t get anything going. In 2016, I got back in an XFINITY car with JGL and had some good runs. I built my stock back up a little bit. That got the attention of BK and Ron. They were in need of a driver and they called me up.

Catanzareti: There are many drivers who have their sponsorship struggle stories. What is your story like?

Lajoie: It was absolutely nothing. I had no money, no sponsors. Youtheory soon saw me, and how I carried myself on social media and the values I have and how they relate to theirs. They thought I would be a good representative of those guys and they gave me a little help to fish around. We ended up with JGL and those guys. I had some really good runs and got some good brand awareness for those guys and myself back at the track.

Catanzareti: You were on the phone with Jimmie Johnson. That phone call, how did he help you to get this started?

Lajoie: I was politicking really hard to try and get into this car. It’s hard if you’re not bringing some money. I felt like I really wasn’t making much headway. Jimmie and I, we were mountain bike buddies, we hang out and work out some times. I figured if Jimmie Johnson, a seven-time champ would offer a call-up on my behalf, that it would carry some weight.

I texted me, asked for a favor. He called up, talked for a bit. Two days later, that’s when Ron was like ‘Alright, lets go and do this thing.’ It was a cool story and he was one of those guys who have helped me along the way. There have been others, hundreds of others. I am proud to represent those guys today.

Catanzareti: What is your mindset? You are racing for a confirmed future in the Cup Series and in NASCAR. I can’t imagine racing with that on your mind – is it on your mind?

Lajoie: You just try to – you don’t think about anything outside of what your job is inside the racecar when you’re out there. You have so much information to take in and process that if you’re worried about other stuff outside the car, then you’re not going to be able to run up with the guys in front of you.

Catanzareti: What do you think about the Cup Series?

Lajoie: There are no friends. Even in practice, when you try and suck up to somebody and they try to break you off the draft. There are a lot of guys who are there for themselves, which is all good, I understand that. I’m going to have to learn that you have no friends out here, even your teammates sometimes aren’t even your friends.

It’s going to be a fun year myself, trying to build my career, get a full-time ride, which I haven’t had in a NASCAR series yet. With BK Racing, hopefully it all works out. Trying to hard hard, get sponsors, put good races together, never know what can happen.

Catanzareti: Do you think you have to be more selfish to make it in this sport?

Lajoie: Racing is a very selfish sport. I’m a Christian guy who tries not to be selfish outside the racecar. It’s definitely a switch you have to flip when you get inside the car, there are no friends, no helping anybody. If you are helping someone, it’s only to benefit yourself later in the race.

It is a tough battle just to flip that switch off and be a selfish person but, hey, sometimes the most selfish people are the most successful ones. I try to stay grounded outside the racecar, be friends with everybody and try t give a little bit. But inside the racecar, it’s all selfish and all for Corey Lajoie.

Catanzareti: What advantages have you found with your father in the sport

Lajoie: No, but it definitely helps open a conversation. Somebody who knows my dad from back then, it’s definitely a good introduction. My dad, he’s always wanted me to go out and help myself along the way. It has worked out.

Catanzareti: You won in K&N, ARCA. What would you call your favorites victory?

Lajoie: The next one. I’ve had a bunch of good ones. Dover, a couple ARCA races, Kentucky, Pocono. They have all been good, but I bet the next one will always be better.