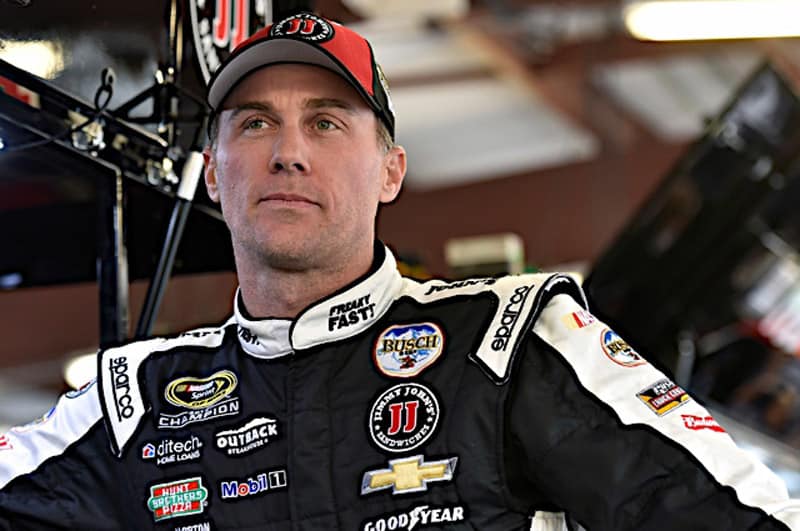 Did You Notice? … Sunday’s Cup Series race at Atlanta had more pit road speeding penalties called (13) than lead changes (nine)? It was only fitting the day’s dominant driver, Kevin Harvick, got slapped with the final ticket, a call that took away a trip to Victory Lane.

The penalties were spread out equally, affecting everyone from underfunded Derrike Cope to the sport’s Most Popular Driver, Dale Earnhardt Jr. Two former series champs, Jimmie Johnson and Matt Kenseth got caught twice. That tells you there was a systematic problem throughout the field.

Other drivers blamed extra timing lines added to Atlanta this year; Hendrick Motorsports thought its calibration might have been off (Earnhardt, Johnson and Elliott all got caught). But the bottom line is the fan base likely will never know what happened. You’ll just have to trust NASCAR got it right.

An outcome put into the hands of officials? That’s always a problem. Elliott’s “I’m keeping a secret” doesn’t help matters either.

For a penalty that was the most important storyline in this race, pit road speeding is difficult to report on because it’s something you cannot see. It’s not like a holding penalty in football, where video replays clearly show a guy’s jersey getting grabbed. By comparison, there’s no shot on FOX with a pointer showing exactly just how fast a guy was going over the limit during his stop.

Nope, there’s simply no visual evidence at all. Instead, what you see is NASCAR calls out a number, the driver gets black-flagged and well, that’s that. It’s like playing bingo from the tower. “I-20, calling I-20, time for you to go a lap down.”

With so many pit penalties, one of which deciding the outcome of the race that allows officials to take center stage and black helicopter conspiracies to run wild. It also robs fans of what they tune in to see the most: racing. The battle between Kyle Larson and Brad Keselowski, while intense for the win felt hollow with a guy that could have lapped them, Harvick, taken out of it.

So let’s play TV watcher, shall we? Which outcome do you think fans want to tune in for: a race lost by a last-lap battle, perhaps contact as two cars race to the line or a driver robbed of a trophy because he sped through an extra timing line? Let’s put it this way; fans can go 55 miles an hour on their local highway. They don’t need to see that speed judged on television. Not a soul is tuning in because of the brilliant strategy pulling into the pits adds to the overall equation.

Yet that’s exactly what we’re talking about after Atlanta; a judgment call. It’s officiating, not the athletes themselves making the news.

So let’s hope the action on the race track takes center stage instead Sunday in Vegas. Having to focus on the pits puts a pit in my stomach – and I’m sure I’m not alone.

Did You Notice? … SMI is jockeying for a second date at Las Vegas Motor Speedway? Pending a vote tomorrow by city officials, that long-awaited addition to the NASCAR schedule is all but assured. We’re not sure when the second Vegas date will run in 2018; some have it landing during the Chase, with rumors going so far as to say Homestead could even be replaced as the season finale.

There’s only one fact we know for certain; the sport will not expand to a 37-race schedule next year. The move, then means an SMI track will lose a date and all signs point to New Hampshire Motor Speedway. The one-mile oval has struggled to remain relevant, both with on-track competition and attendance in recent years. The Cup races remain unsponsored this season as contraction looms in the distance.

It’s a shame considering the Northeast is already a weak market for the sport. Remember last decade, when NASCAR was trying to build in New York City (Staten Island)? Losing a date at NHMS would cut back the number of dates near there and Boston to just one. Yes, I guess Pocono counts for NYC folks but it doesn’t seem close enough to make a major impact in the country’s largest media market.

Clearly, a second race in Vegas has a lot of plusses attached: more money. Better competition. Perhaps a higher amount of media exposure. Your ticket revenues can only go south for so long before you need to adjust the schedule to where the money is. But losing a date in the Northeast, however bad the track may be makes the switch more of a wash than you may think.

Did You Notice? … Toyotas didn’t lead a single lap at Atlanta Sunday. Sure, it’s still early but Joe Gibbs Racing appears a step behind their its rivals at Penske, Hendrick and Stewart-Haas Racing.

Rookie Daniel Suarez has had perhaps the sharpest learning curve; the reigning XFINITY champion has yet to earn a top-20 finish. Even a visit from former driver turned mentor Carl Edwards at Atlanta didn’t help. Matt Kenseth, still seeking sponsorship seems the strongest but had to fight back from those two speeding penalties to stay relevant at Atlanta. Denny Hamlin has been bit by bad luck while Kyle Busch? He’s just got a bad temper (see Goodyear, Daytona Tire Compound).

It’s important to note that JGR, along with partner Furniture Row Racing had a ton of off-track distractions this offseason. Hamlin needed to have his contract extension signed, along with sponsor FedEx to wrap up the future of the No. 11 car. Edwards’ retirement threw everyone for a loop and put Suarez in the car earlier than expected. Kenseth, after losing primary sponsor Dollar General has a No. 20 car still seeking replacements.

Over at FRR, the team added young Erik Jones and expanded to two cars for the first time in their 12-year history at the Cup level. That’s not an easy task, especially for a Colorado-based team already facing logistical challenges. Those are the only six viable teams running Camrys; small-time BK Racing, who runs a two-car program struggles to place inside the top 30.

Now compare that with Ford, who brought SHR into the fold this season and who now boast over a dozen teams overall. Chevy, who has long been the largest manufacturer in NASCAR has a whopping 18. Sheer numbers, especially with sponsorship stretched on Toyota’s end could eventually start to catch up with them.

How do you fix it? More teams, more money. But despite a two-race primary deal announced by Kenseth Tuesday (PEAK/BlueDEF) those problems are going to take time to fix.

Could the Camry’s time on top of the sport be short lived?

So please Tom, tell us, how would you police speeding on pit road? Everyone knows the rules but they all try to push it right to the limit. The real problem here is that too much of the race is decided on pit road instead of the track during green flags. I agree that no one wants the race decided by the officials but it’s in the drivers’ hands to control their speed. Maybe they should just slow down 0.5 mph…. that might work.

Nascar would be wise to be a little more transparent with their speeding calls. Like show us the money, er, the timing loop data. Because it’s a tough sell that these guys, with all the experience they have at Atlanta, would be so far off. The Harvick call smells the worst, 9 clean stops and then he blows the money stop? Really really hard to believe. Nascar and transparency are two words that are never found together, since there is zero transparency with Nascar officiating, which is why lots of people still call it WWE on Wheels.

Well since speeding penalties can decide the race off the track, maybe we shouldn’t have speeding penalties at all, or even a pit road speed limit. Let’s just go back the the thrilling days of yesteryear when the cars went down pit road at race speeds to get to their pit….

I mean come on. Pit road speeding is black and white; either they’re speeding or they’re not speeding. There’s no judgement call in that and NASCAR does give the drivers a cushion. If the driver goes over the cushion, they’ve got no one to blame but themselves. What they’re doing is trying to cheat the system by speeding here and there instead of keeping a constant pit speed, which works great until you get caught.

No need for “Black Helicopters” on pit road speed. You either are or you aren’t speeding. It’s timed electronically. On Sunday, Steve O’Donnell even tweeted out a screenshot of the speed sheet that showed Harvick over. It was really interesting day at Atlanta in terms of who ran well. Roush looked much improved and RCR was upfront with the 3 and 31 until the mechanical gremlins bit, and Gibbs seemed off.

On the upcoming schedule change, I have mixed feelings. New Hampshire isn’t the most exciting track, but it’s not a 1.5 miler. I guess were getting a road race at Charlotte so the number of 1.5 oval races stays the same. I would have rather taken the fall race from Charlotte and given it to Vegas. I’m surprised people are feeling so bad for New Hampshire. It was involved in the deal that closed North Wilkesboro.

A simple way to avoid the speeding problem on pit road is to “borrow” some technology from other racing series. Put in a limiter chip. Problem solved. But as this involves “technology” (a word NAPCAR hates) it’ll never happen. Look how long it took them to implement HANS devices, SAFER walls, and 1980’s fuel injection systems.