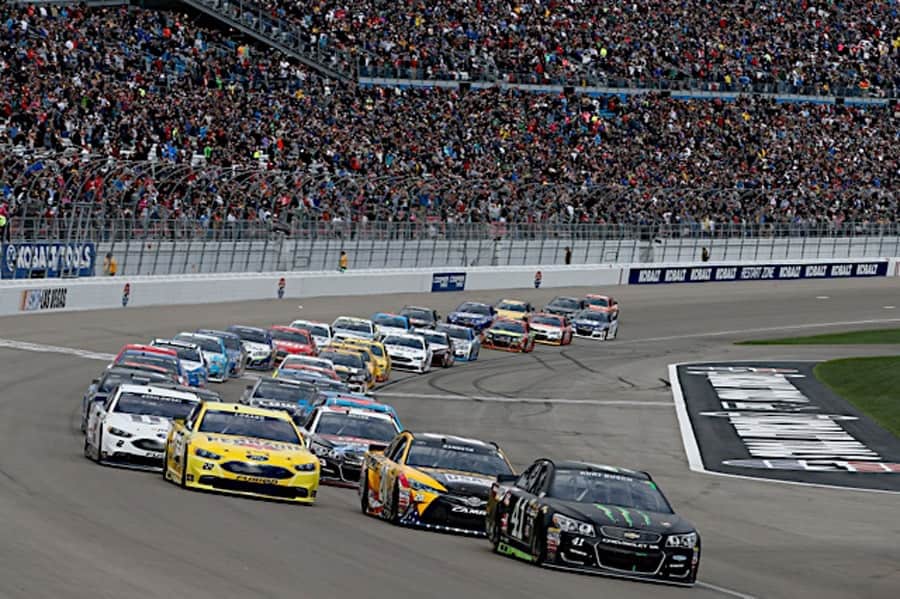 Las Vegas Motor Speedway (LVMS) announced on Wednesday that they will be adding second races for both the Monster Energy NASCAR Cup and XFINITY Series to their schedule in 2018.  The new races will run as part of the existing weekend that is currently a standalone race for the Camping World Truck Series in September.

NASCAR has stated repeatedly over the last decade and change that the Monster Energy NASCAR Cup Series schedule is full.  If a new race is created, then that race must usurp an existing one.  However, track ownership groups have the power to shift races from venue to venue within their group with NASCAR’s approval.  To that end, Speedway Motorsports, Inc. (SMI) has elected to shift the Monster Energy NASCAR Cup Series fall race from New Hampshire Motor Speedway and the September XFINITY Series race from Kentucky Speedway to LVMS to create their new fall tripleheader.

In addition, LVMS also announced the addition of the Camping World Truck Series to the track’s March race weekend.  The result will be that LVMS will be the only track on the circuit with two tripleheader weekends.

LVMS officials are very excited about getting a second Cup race.

“We’re honored that NASCAR has entrusted us with a second NASCAR weekend,” said Chris Powell, President of LVMS.  “We’ve pursued a second NASCAR premier-series race weekend for quite some time, so this news is monumental for everyone at Las Vegas Motor Speedway as well as everyone in our wonderful city.”

“We have outstanding support from the LVCVA (Las Vegas Convention and Visitors Authority) and other Las Vegas leaders, and we’re supremely confident that we’ll host two top-notch race weekends,” Powell continued.  “Today’s news will create lasting memories for our fans and will provide immeasurable economic impact for Southern Nevada.”

Despite the moves, SMI remains committed to the July race weekends at both NHMS and Kentucky Speedway.

“We will work hard to make sure the July NASCAR race weekends that we will continue to host in New Hampshire and Kentucky are bigger and better than ever before for our fans, sponsors and stakeholders,” Smith said.

Dates for the new races were not announced as part of the press release.  They will be released when the official 2018 schedules are out.

I’m neutral on this move. I don’t like adding another 1.5 miler to the playoffs, but New Hampshire isn’t the most exciting track either. With Charlotte probability using “roval” next year, I guess it’s a push. However, Vegas does appear to have one of the best fan experiences on the circuit with the Neon Garage. This new fall race is one, I would probably look to attend.