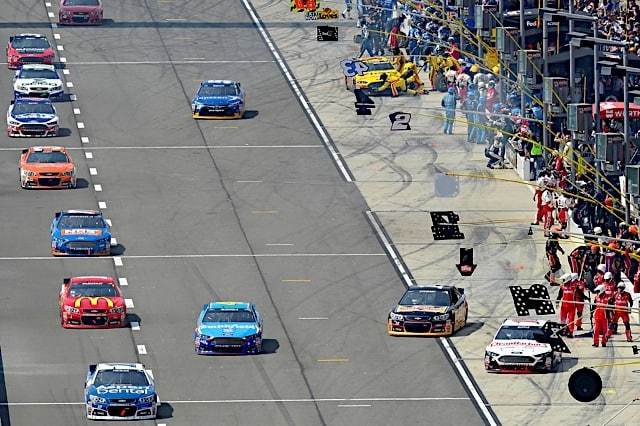 Will Focus Be on Pit Road or the Racetrack in Las Vegas?

None of us enjoy seeing penalties on the forefront of weekly discussion, but it is there again. From the Camping World Truck Series to XFINITY to Cup, Atlanta kept us up to date on the rules and why pit road should be taken seriously.

Allmendinger was blasted with penalties after having three loose lug nuts at the conclusion of Atlanta. That mistake cost him 23 spots in points, and his regular crew chief Randall Burnett has been suspended until after the three-week West Coast Swing.

This occurred in a race where pit road speeding penalties caught more than a quarter of the field, including Kevin Harvick, whose penalty cost him a race win in the making.

Rules like this sure can get the attention of both the teams and race fans — maybe too much attention? Rules are rules, and these teams certainly need to get with the program on what they can and can’t do, but, man, nothing sucks the excitement out of the upcoming race than radio, TV and social media filled with penalty talk and confusion on things like lug nuts, ride height and timing lines.

Now, Atlanta is usually the place where we see lots of trouble with penalties and issues through technical inspection. Understandable, as it’s the first real race under the updated downforce packages each season.

We can hope that this is the case as we get ready for 400 miles at Las Vegas Motor Speedway, but pit road problems usually don’t go away at any time of the season — and that’s OK. But let’s not make it the leading topic of the week again.

Like Brad Keselowski would say, “it ebbs and flows.” Let’s hope so, Brad.

Kurt and Kyle: Which Busch Brother Takes the Cake?

Sunday’s Kobalt 400 at Las Vegas Motor Speedway will be the home race for Kurt and Kyle Busch. With the two champions having varying starts to the 2017 Monster Energy NASCAR Cup Series season, who will outrun the other after 400 miles?

If history means anything, give the nod to younger brother Kyle. Making his Cup debut there in 2004, the Joe Gibbs Racing driver has earned five top-five finishes, including a win in 2009.

As for the elder Busch, the Daytona 500 champion has only one top five through 15 Las Vegas starts. With only two top 10s since 2006, his home track is among his worst on the circuit.

Additionally, Kyle has outraced Kurt in 10 of the last 11 Vegas races.

So, with all these stats on the table, it seems like an easy prediction to make as to who will beat who at the checkered flag. But, wait, how have they’ve been running the last two weeks? Oh, this could shake it up.

Kurt is off to a flying start in 2017, winning his first Daytona 500 before backing it up with a top 10 last week at Atlanta. He’s following his three teammates, who are all performing upward to their respective 2016 statures.

For Kyle, the year has been as tough as a two-race season can be. A hard wreck in the 500 seemed to be put on the backburner at Atlanta, when he qualified third. The speed didn’t last long, unfortunately, as the No. 18 fell to 20th by the end of Stage 1 and could only manage a 16th-place result.

So, track history or season momentum — which will prevail?

Toyota and Joe Gibbs Racing have yet to put on a clinic in 2017. Yeah, it’s only two races, but with the apparent strength of Ford so far, it could be something to track.

Matt Kenseth came home with a third last week at Atlanta. Though he was off the lead lap for more than 80 percent of the event, the No. 20 bounced back to earn the only top-15 finish for JGR in 2017. That’s pretty shocking; after 2016, not many would predict that even after two races.

Compared to last year, this would’ve been a crazy thing to attempt to put in ink. Gibbs’ team perfected the 2016 Daytona 500 across all four cars and a fifth affiliate with Martin Truex Jr. and backed that up with two drivers in the top five the following week.

Indeed, the whole stable has some work to do in week No. 3 at Las Vegas. With combined finishes of 38th, 16th, 38th and 17th, the other two veterans, Kyle Busch and Denny Hamlin, are usually wait-and-see drivers. They always seem to turn things around and score victories eventually.

That may be true again this year, but JGR now has a rookie driver in Daniel Suarez, who has finished 29th and 21st in his first two Cup races. The defending XFINITY Series champ is a tougher one to categorize and could go either way. For him, these early weeks are crucial in maintaining a healthy baseline for that summer stretch.

Could this be the start of a low-win season like 2014, or is it nothing significant? Let’s see if they roll out in Vegas like Kenseth did in 2013.

What Will Bleed Over from Atlanta to Las Vegas?

Atlanta was quite an interesting race when you look at the full field of results. For starters, there’s TriStar Motorsports, which is making a Cup Series comeback with driver Cole Whitt in the No. 72 Chevrolet after years full-time in the XFINITY Series.

And so far, the team’s return is working out quite well.

Whitt grabbed a 17th-place finish in the Daytona 500, marking the first top-20 finish for car owner Mark Smith since 1996 at Charlotte with Dick Trickle. In fact, the 500 was only the second time the team finished a race since the end of its first go in the Cup Series in 1997.

But Daytona can be a bit of a crapshoot, right? Well, that run was backed up with a 20th at Atlanta —  and now you may be getting somewhere.

Coming into the team’s 200th Cup entry this weekend, Whitt could be taken seriously in the mid-pack world if he can bring home another 20th- to 25th-place result.

Ty Dillon is in similar air with Germain Racing. He finished 15th in Atlanta and can make waves if Germain can keep that train going.

Meanwhile, Clint Bowyer and Erik Jones definitely showed up at Atlanta, as they both finished just shy of the top 10 in 11th and 14th, respectively. Bowyer ran top 15 throughout the day and overcame a cut tire to still bring home a solid finish. Jones, in only his fifth Cup race, ran top 10 most of the day and started the regular season off with a well-earned smile.

To cap off the happy drivers from last week, might as well end it with Happy himself, Kevin Harvick. He and his Team Penske friends have quickly turned Ford into the sport’s leading manufacturer. Atlanta was a shocking run, even for Harvick, leading 292 of 325 laps.

The rest of the field, Ford or not, may not want to see this, but Harvick would very well be on the attack again in Las Vegas.