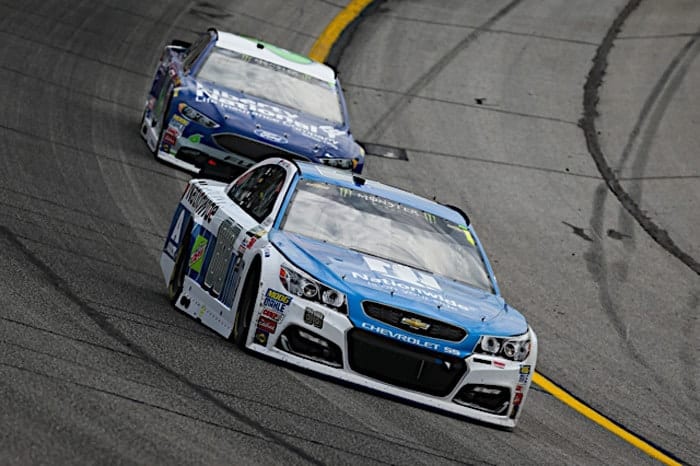 MENCS teams hit the track Friday at 2 p.m. ET for practice and then 7:45 p.m. ET for Coors Light Pole Qualifying. Here are nine drivers to keep an eye on for your DraftKings lineup as the series heads west.

Even though the NASCAR season is already underway, there’s still plenty of time to get in on the action at DraftKings. Each week of the NASCAR season, courtesy of Frontstretch, you can enter to win BIG cash prizes just by picking a team of 6 drivers. You pick, you play, you win, it’s that simple.

Want to learn more? By signing up at this link right now and making a $5 deposit, you will earn a free entry into one of this weekend’s NASCAR contests. So don’t wait, sign up and WIN on DraftKings today!

Keselowski picked up a fairly surprising win last week at Atlanta. After fighting his way back up through the field following an unscheduled pit stop that caused him to fall off the lead lap, he made a late pass on Kyle Larson to seal the deal.

Brad Keselowski has two wins at Las Vegas Motor Speedway, one of which came last season. He is currently on an impressive four race top-10 streak at the track, which includes two wins and a third place finish. He has also led laps in the past five straight races here. Keselowski’s average finish position of 16.8 in Vegas is a bit deceiving due to the fact that since Team Penske switched to Ford in 2013, he hasn’t finished worse than seventh.

Atlanta was a disappointment for the #48 team. The afternoon was not a bright spot for Johnson and Crew Chief Chad Knaus as the team misfired both on the track and on pit road. Luckily for them, Las Vegas has been kind to the seven time champion.

Johnson is the all-time leader in wins at Las Vegas Motor Speedway with four. From 2005-2007, Jimmie won three straight races. His last win here was back in 2010, but he has finished strongly since then. Last season, Johnson came home in third place. Johnson has four top-10s in the last five races at the track. He was runner up in 2012, and had back-to-back sixth place finishes in 2013-14.

Skeptics have reason to stay away from Jimmie after his performances the past two weeks, but this week could be the race we see him turn things around.

Denny Hamlin is yet another driver who historically hangs out in the top-10 at Las Vegas. In 11 races, he has finished in the top-10 five times (45%). Hamlin has finished outside the top-20 only once in his career, 22nd in 2009. He has also finished on the lead lap in all but one race, that same race in 2009. Hamlin led 10 laps in this race last season, and has led laps in three out of the last four races in Las Vegas.

Kasey Kahne is off to one of the hottest starts he’s seen in recent years. A fourth place finish at Atlanta after starting 29th, and running one lap down for a majority of the race is a huge confidence booster for that team. What has benefited his DraftKings suitors thus far has been his poor starting position and his ability to reach the front regardless. If Kahne starts outside the top-20 again, he is a must start.

Kahne finished 10th in this race last season, and has finished inside the top-10 in 53.8% of his starts at Las Vegas. Since making the move to Hendrick Motorsports in 2012, Kahne has an average finish of 11.2. Kanhe may not dominate from the front for the entire race, but he is reliable when it comes to positive position differential points.

Ryan Newman was on his way to an impressive top-5 finish before he lost all power in his car and had to take it to the garage. The same issue struck teammate Austin Dillon shortly after, causing both Richard Childress Racing drivers to miss out on solid finishes.

Newman has similar numbers at Las Vegas as former RCR driver Kevin Harvick, with exception of Harvick’s win in ‘15. While it’s easier to predict that Harvick will run well on Sunday, the numbers don’t lie. Newman is a cheap option for the middle to bottom end of a DraftKings lineup that will garner big returns when all is said and done. He has four top-10s in his last six Vegas races, and a 13th place finish last season. In his last three races here, Newman has an average finish position of 7.6.

MENCS series sophomore Ryan Blaney may not have a large sample size when it comes to Las Vegas, but he is an intriguing option nonetheless. In 2015, he started 30th and worked his way forward to a 19th place finish. Last season he started 14th and still managed to pick up a few positive spots en route to a sixth place finish.

Blaney has been a DraftKings darling the past two weeks, and shows the underdog potential for another great week.

Paul Menard was unimpressive at Atlanta following his top-10 finish in the Daytona 500. He finished 25th after starting 17th in the Folds of Honor QuikTrip 500. But heading to Las Vegas, Menard is could be a candidate for the back end of your lineup.

Menard has six straight top-15 finishes at the track, including three straight top-10s from 2012-2014. Other than last year when he started and finished 15th, Menard has been a lock for positive position differential. From 2008-2015, he finished higher than he started in every race. His average starting spot is 24.2, and his average finishing position is 16.5, so if he qualifies outside the top-25, he deserves a strong look.

Ricky Stenhouse Jr. was impressive in the early stages of Atlanta, but tapered off as the race went on. He was fast in practice, and qualified well, but dropped from a 4th place start to a 13th place finish. Normally, a 13th place finish would be great for Stenhouse, but in Daily Fantasy, those are just lost points.

Las Vegas is another 1.5 mile track where Ricky has shown speed. He has two finishes inside the top-20. He set a career high Las Vegas mark with a 12th place finish last season. After what we saw from him last week in the first half of the race, Stenhouse is an intriguing driver to keep an eye on for this weekend.

I prefer to be “Powered By” Jack Daniels or Jim Beam!