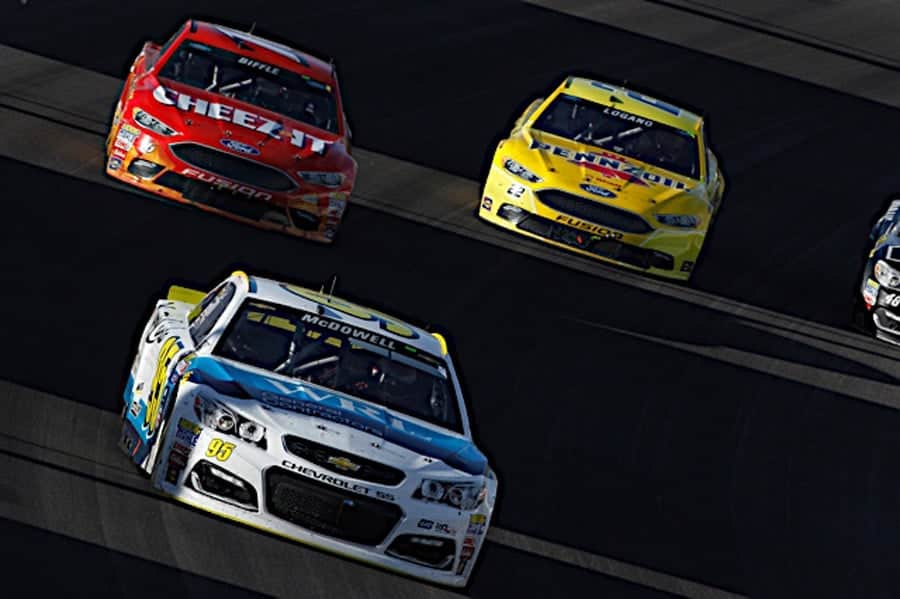 It seems that much of all the hype, concern, debate, resentment, vitriol and whatnot surrounding the implementation of stages is all for naught.  The Cup race this past weekend at Atlanta played out as almost any other race at a 1.5-mile track.  The question that should have been raised is why, when the caution flag flew on lap 241 for ‘debris’ that Kevin Harvick wasn’t awarded additional points for what was, in essence, a stage win?  And some thought that the inclusion of stages might be the purging of those unwanted yellow flags.  Pshaw.

Happiness Is… Ratings.  The TV ratings are in for the Atlanta race and just as everyone has predicted, they’re abysmal.  Absolutely horrific.  Teams shouldn’t even be bothering to load up the trailers to head out West – total waste of time for everyone involved.  Bringing in a final 3.8 rating, the race at Atlanta are the lowest for the second race of the season in 19 years. In fact, it couldn’t even match last year’s disappointing viewership numbers.

The thing about the numbers, is that they don’t happen in a vacuum and need to be considered in relation to a number of things.  Others here at Frontstretch have already discussed other mediums for NASCAR consumption, and surely that is part of the TV rating dilution.

But there’s a real positive way to look at what is happening and that is to note that the Cup race was the most watched sporting event of the weekend.  College basketball, which holds an enormous presence, could muster only second place, with the Duke – North Carolina game scoring a 2.4  Set side-by-side, NASCAR doesn’t look too bad.

Happiness Is… Change.  Not all change is for the better, but it is inevitable, even if it feels as though it takes an eternity sometimes.  Fans of the sport have been clamoring for changes to the contemporary Cup schedule for a number of years, hoping to see a better mix – or at least not more of the same ol’ same ol’.  Well, Speedway Motorsports is doing its part.  Sort of.

Announced yesterday, Las Vegas will gain a second Cup date while also adding an XFINITY and Trucks race to the calendar, making the track in Nevada the only one of the schedule to host two weekends when all three racing series will be in action.

The losers from the changes are New Hampshire, which loses its autumn Cup race, and Kentucky, from where the stand alone XFINITY race will be taken.  All tracks involved are, of course, part of the Speedway Motorsports company.  How it all will play out will be interesting, and leaving New Hampshire is a bittersweet thing, as it’s one of the few smaller tracks on the schedule but has not featured the most exciting racing.

The change represents the notion that someone somewhere is indeed listening while also acknowledging the support of the Las Vegas market.  The changes will be in effect for the 2018 season and give Vegas a time in the spotlight for the playoffs.

Happiness Is… Change Pt. 2.  One of the ideas being bandied about this week was how mufflers were being considered for the cars.  The thinking behind such a move would be that people at the track would be better able to talk while the cars roar around the track.  Mark Martin even tweeted his support of the idea.  The noise quotient of the sport is one that may be worth examining, but NASCAR also may want to heed how Formula 1 dealt with the change of the sound to its engines when it moved from V8 to V6 in 2014.  Just something to consider.  But once again, the self examination is a promising thing.

As is the fact that Speedway Motorsports may not be done monkeying with the 2018 scheduling yet.  The company, which owns eight tracks on the schedule is also pushing forward with the notion of switching one of the Charlotte races from oval racing to road course.  The track is already laid out and increasingly supportive fan response toward road courses has encouraged tracks to ask questions.

To think that the schedule may lose one of the typical Charlotte races is rather wild, as they’ve been a stalwart of the calendar.  However, the addition of another road course, with it being (fingers crossed) in the playoffs, would have to be a boon.   Again, not every move may be popular but it appears as though the fans have the ear of those higher up.  Is this the beginning of a new era of fan appreciation?

Happiness Is… IndyCar. The little series that could returns to action this weekend in St. Petersburg, Florida, when IndyCar hits the streets (and tarmac).  Even with daylight savings messing with everyone’s life, the race should be over before the Cup event gets going.  While many people may ignore the series, and judging by the numbers, you do (the series was averaging under 400,000 viewers per go round), now is as good as any to jump in and give it a look.

The series has endured a seemingly endless offseason – exactly when did they last race – yet is climbing out of its hibernation to get its engines to full throttle.  The track may not be the most gripping for excitement, but perhaps things might be a surprise.  Pay attention to Chip Ganassi’s new affiliation with Honda – will there be any trickle down from the F1 team?

Maybe while NA$CAR is monkeying with the noise level: they, along with other sports, should pay attention to
the broadcasts, It seems that the sound man has been given carte blanche to project the “sounds of the game”.
Many times one cannot hear the announcers for the over mixed sound. If I want to be in the middle of a deafening crowd, I will attend the event. Take heed Fox, ESPN, and NBC.

Seems to me the sound that needs muffling the most is that of the Waltrip brothers.

Las Vegas has guaranteed sponsorship for ten years of racing. Another version of pay to play rears its head. As long as nascar owns the tracks the scedule will chase the money. Of course without the money there is no racing. Shame we can’t race a bunch of different track instead of the same ones twice a year.