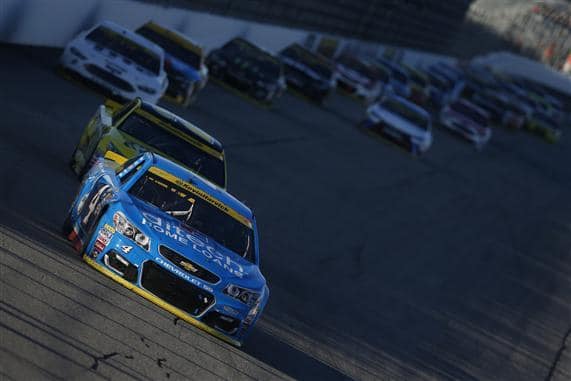 When NASCAR announced that Las Vegas Motor Speedway was getting a second race in each of the top three series, New Hampshire Motor Speedway quickly became the odd man out.

As a result of the changes, Loudon lost its fall race for the Monster Energy NASCAR Cup Series, which served as a Chase race.

The Magic Mile, as it has come to be known, has hosted two races in the Cup Series since 1997.

Additionally, the Camping World Truck Series currently runs a companion event with the Cup Series’ fall race at the track, meaning the series will no longer travel to New Hampshire, a track the series has raced on since 1996, with the exception of 2012 and 2013.

The loss is devastating to the track and community, but NHMS general manager David McGrath urges race fans to know that the track is not dead just yet.

“Give me some time,” McGrath said in a press conference on Thursday (March 9). “Let me show you what we’re capable of as a team.”

According to McGrath, the goal for future years will be to put more effort into making the remaining July event into something bigger and better. The July event has been around longer than the canceled September one, with the first July race taking place in 1993.

McGrath pleaded for fans to not “turn your back on” the track.

Apart from the lone Cup race, a host of other series will compete at the track in the future. The XFINITY Series has a July race at the track on the same weekend the Cup Series is in town.

The track, which opened in 1990, has been a mainstay on the NASCAR Whelen Modified Tour since it opened. Those races continue to be popular ones on the Modified schedule, as the northeastern United States is modified country. In 2017, the Modified Tour will run three races at New Hampshire.

The track also hosts a K&N Pro Series East race every year, which is one of the few on the tour’s schedule to draw more than 30 entries.

“I know it sounds tough right now, but I promise you in the months and years ahead, this is going to still be the place to see a great, great Monster Energy NASCAR Cup Series race,” McGrath said.

The track overall (FOR THE MOST PART) still had good numbers, compared to others. The track isn’t for everyone, but it does have a lot of loyal fans. My friends and family would stay on a lakefront property very near the track for a long time, make it a long weekend and what fun! The whole New England experience is..well great! Living on the New England Coast going “inland” to the “lakes” was awesome! I did that till I moved far, far, far away, but other family and friends still go. Is it perfect? No. But the track still does try and make each experience great. I like the track in person, maybe it does not translate well on TV. I do not think the cookie cutter Las Vegas is the way to go, it will be a mistake, imo. Sad to see one of the races go, just knowing the energy and the dynamic of what the race weekend does bring to the region and $$$$$. It does, it really does. Ah….what the hell……