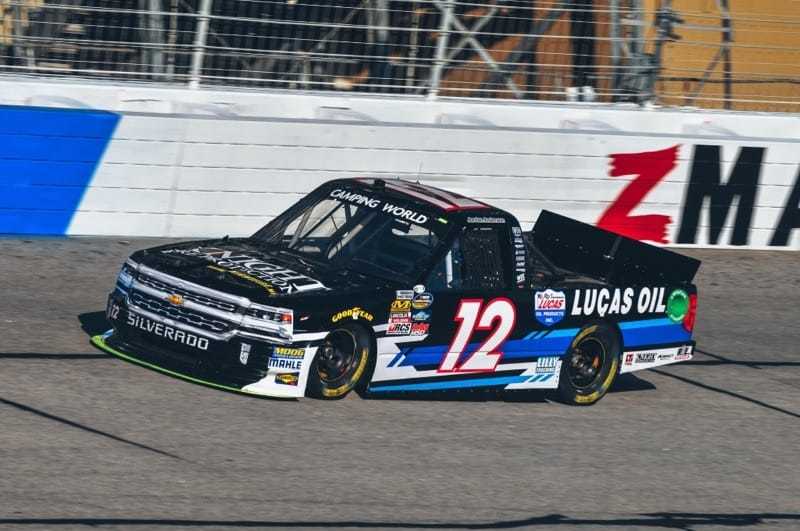 The Camping World Truck Series may be off-track until April, but you can bet one driver is working double-time, hoping to find a way to get back on track when the series reaches Martinsville on April 1.

After an incident at Atlanta Motor Speedway last weekend, Jordan Anderson, who made his Truck Series debut at Phoenix in 2014, finds himself sidelined as his only truck was destroyed. Contact with Korbin Forrister sent Anderson spinning with rear end damage that may have been repairable, at least until he slid into the grass and the splitter dug in, tearing the front end apart.

“Unfortunately, unless we can find another truck, our season is over,” Anderson said in an interview with MRN’s Steve Post after the wreck. “To get wrecked like that is very frustrating.”

Anderson did approach Forrister at the track after the race but walked away without a better understanding of exactly what happened to cause the wreck in the first place.

The normally positive and upbeat Anderson was visibly upset and for good reason. He’s had quite the roller-coaster ride in his short NASCAR career.

The 2015 season looked like a ho-hum year for the 25-year-old, especially if you notice his best finish came in the form of a 13th at Michigan. But the story behind that year’s worth of racing is what makes it special for him. Hauling his truck on a 40-foot trailer behind a dually, Anderson and a small handful of people gathered wherever practical – a hotel parking lot, a grocery store parking lot, a borrowed section of a race shop from a generous team on the road – to prepare his truck weekly.

“[2015] was one of those years where it was a journey,” Anderson recalled. “I didn’t realize what we were doing as we were doing it. I’m a firm believer everything works out for a reason, and it’s so cool to look back on what we were able to do.

“Yeah, it was tough, but I enjoyed it because I was getting to go do what I love to do.”

Perhaps the biggest benefit of the grass roots effort is that Anderson developed quite a following of fans that appreciated his true passion for the sport and the work he put in trying to make it to the track each week. Add in how personable he is with everyone he comes across at the track, and you can understand how he built the following he has.

Moving into the 2016 season, Anderson appeared to have found himself a home at Bolen Motorsports. After making the field for the season-opener at Daytona, the new driver of the No. 66 Chevrolet was riding the high of having a people to work on the truck and hopefully “build a program.” But it wasn’t meant to be as Bolen ended up choosing to move into the 2017 season without Anderson behind the wheel.

So once again, he found himself doing the grass-roots thing this year.

“The biggest thing through all of this is going back to being the people’s driver, giving the fans someone to pull for that’s just like them,” Anderson said of going to back to doing his own thing. “Just like the average person who would have to fight to get a job, fight to pay rent, fight to put groceries on the table. I do the same thing and I’m up against the same challenges as everyone else out there in America. I’m really the everyday Joe NASCAR driver, somebody that people can relate to.”

But like the 2015 season, there just wasn’t enough speed for him to make the field for the season-opener at Daytona. But the following week at Atlanta, he managed to make the field and was running steadily until the incident with Forrister sidelined him indefinitely.

“When I told Steve Post on MRN that was the end of our season, it really was,” Anderson said by phone Wednesday evening.

This bump in the road is enough to derail the efforts of even the most dedicated driver, but not Anderson. Instead, he’s called the time frame since Saturday “a pretty humbling couple of days.”

“I told my mom after the crash happened that I believe there’s a positive in this, some way or another. I just don’t know what it is yet,” Anderson said by phone Wednesday evening. “And it’s just been so incredible – all the support and prayers and all of the people who are stepping up to try to help keep this going. It’s been humbling; it’s left me speechless a little bit, which is surprising for me.”

Support and prayers from your fans is great, but those expressions of support don’t pay the bills to fix the truck. Enter Anderson’s Fueled by Fans initiative. After finding success in allowing fans to sponsor his truck in exchange for a variety of perks last season when trying to get a new motor, the website that was used last season is once again live.

For everyone that asked, re-launched the https://t.co/KUQw76FmpJ website today… RT to help us get a new truck built! ??? #fueledbyfans pic.twitter.com/we3nAzybS1

With options ranging from a $20 contribution to get your name written on the truck, up to $5,000 with a substantially larger amount of perks, fans and any interested parties can be a part of Anderson’s return to the track.

“Being able to have the fans support this program for what it is has been really special. This is one of those things that I hope we can look back on a few months from now and look at where we were. Nothing in life that happens that’s bad is ever bad; it’s an incident, it’s a circumstance. There’s always a positive through it all. It depends on how we look at it.

“I struggled with that at the race track; I was pretty upset and down in the dumps. But after looking at the big picture situation, yes, I have a wrecked truck, but I have an opportunity to get my fans pumped up.”

And while it would probably just be easier to hang up the helmet and call it a career, that’s not something that’s an option for Anderson. Instead, he tends to follow his dad’s example.

“My dad is not a quitter; growing up we never had the money to hire people to come help us, so my dad would always step up and help me,” he explained. “I can’t think of a time when I called my dad and asked him for help that he didn’t come help me. His personality has worn off on me. The never give up attitude, staying after it, being persistent.

“My dad’s faith has been at the forefront of his life, and he’s always challenged me to be a man of God in everything I do. Being a man of God means being a man of excellence, and that means in business dealings, in how you treat people, showing people respect. In this garage area, a lot of people come and go, and my whole goal is to earn respect and to show people that we’re working hard to be here.”

Off the track, Anderson is as authentic as they come. He regularly interacts personally with his fans through a variety of different social media outlets. In fact, he’s the only one who has the passwords to his accounts, with the exception of Twitter, just in case his phone dies. A guy from humble beginnings, whose father is in property management and mother is a hairdresser, Anderson tries to live by Proverbs 3:5-6 in his daily life, not just when he needs a good pick-me-up.

“I accepted Christ at 6, started racing at 7, and my faith is a huge part of my life. It’s a huge part of why I’m where I’m at now,” he said. “I’ve always told people racing is one of the toughest sports out there, not even from the physical side but more from the mental side. One word that I would say describes my entire career: perseverance. This sport has so many ups and downs – the good days are really good, the bad days can be really bad.”

“At the end of the day, I love NASCAR, I love this sport, I love being able to get behind that wheel and drive. I’ve worked for this opportunity my whole life,” Anderson said. “I don’t come from a racing background. I told my mom and dad at six years old I wanted to be a NASCAR driver, and now having the opportunity to be in the sport and be in the series, it’s amazing.”

It remains to be seen whether Anderson will garner the support he needs to get back on track by the time Martinsville comes around, but one thing you can be sure of is that even if the money isn’t there for the next race, he won’t be giving up any time soon.

“Staying persistent is the biggest thing. It all goes back to that.”