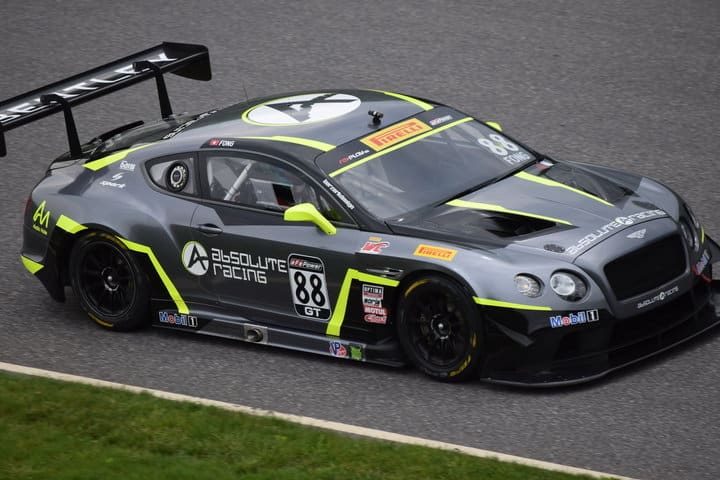 On Thursday, Pirelli World Challenge’s four classes all took to the 1.8-mile street course in St. Petersburg for their opening on-track sessions.  It was a rather expensive day.

In the 55 minute practice session, Absolute Racing’s Adderly Fong was quickest with a lap of 72.571 seconds (89.292 mph) in his Bentley Continental GT3.  Practice times do not officially count towards track records.  However, if Fong set his best lap in qualifying on Friday, it would be nearly a half a second faster than the qualifying record for GT, set last year by Michael Lewis.

Fong’s lap was just under two-tenths of a second quicker than Wright Motorsports’ Patrick Long in the No. 58 Porsche.  James Davison was third quickest in the No. 007 Aston Martin for The Racers Group.  Defending champion Alvaro Parente was fourth fastest for K-PAX Racing, while Alex Riberas rounded out the top 5 in the R. Ferri Motorsports Ferrari 488 GT3.

In the GTA subclass, GMG Racing’s Alec Udell was quickest with a lap of 74.119 seconds (87.427 mph) in his Porsche 911 GT3 R.  That lap was good enough for 11th overall.  Udell was nearly a quarter of a second faster than Michael Schein in a similar Porsche for Wright Motorsports.

Mike Hedlund was third quickest in K-PAX Racing’s No. 98 McLaren, followed by Pablo Perez Companc in the Champ 1 Mercedes.  James Sofronas was fifth fastest in the second GMG Racing Porsche.

In GT Cup, Marko Radisic‘s best lap of the session was 84.831 seconds (76.387 mph) in his Ferrari Challenge Evo.  The lap was the slowest of everyone who took a lap in the session, almost seven seconds slower than Magnus Racing’s John Potter.

While the speeds were right up there, speed was not what Thursday will be remembered for.  The on-track sessions were marked by a number of wrecks.

GT Cup racer Preston Calvert crashed his Porsche in the untimed test session earlier in the day and did not take part in the session.  During the actual timed session, Ryan Eversley crashed his No. 43 Acura NSX GT3 and heavily damaged the brand-new car.

Eversley walked away from the crash.  Later on, the Georgia native stated on Twitter that “I ran out of talent.” but the RealTime Racing squad has a lot of repairs to do before qualifying Friday morning.

The session ultimately ended early due to a red flag for a crash involving Riberas’ Ferrari.  The R. Ferri Motorsport team will also have to make repairs to their expensive chassis.

Meanwhile, the GTS teams qualified late Thursday afternoon for their first race of the season.  Despite all the changes in the class, a class mainstay is at the top of the charts.

Lawson Aschenbach, driving the brand new Chevrolet Camaro GT4.R for Blackdog Speed Shop, spent no time at all figuring out the new chassis.  The two-time GTS champion (four PWC titles overall in three classes) put up a lap of 78.855 seconds (82.176 mph) to win the pole for GTS Round No. 1.

Afterwards, Aschenbach was very pleased with his effort.

“Obviously, it is very exciting to get pole in the first race debut weekend,” Aschenbach said to WC Vision’s Tom Blattler.  “It’s important we have success with this car for everyone involved in the program. Starting this weekend, we knew the car was pretty close to what we needed. It’s pretty surprising to roll out of the trailer and know we have a car that is going to be fast. It’s a testament to everyone at Blackdog Speed Shop, Chevrolet, Pratt & Miller, and everyone involved in this program, to be able to come out and be ready to go. Getting the pole is a pretty good feeling. We care about the race more than anything else and we really want to win this one for everyone involved.”

Aschenbach’s lap is a new track record for the GTS class, beating out the previous record held by Dean Martin.  The lap was nearly a quarter of a second faster than Performance Motorsports Group’s Parker Chase in second.  Andrew Aquilante was third in the sole Ford Mustang in the field.  Unlike in the IMSA Continental Tire SportsCar Challenge, this is an older Ford Mustang BOSS 302R and not the new Ford Mustang GT4.

The No. 25 entry for ANSA Motorsports did not put up a time in the session.  The car was placed on the entry list with a driver to be announced, but it appears that the car will not race this weekend.

For the GT, GTA and GT Cup Classes, Qualifying is next up at 9:35 a.m. on Friday.  For the GTS class, Round 1 of Pirelli World Challenge’s is scheduled for 12:15 p.m. on Friday.  The race will also serve as a qualifying session for Round 2 on Saturday.  For Round 2, the grid will be set by the fastest times in Round 1.