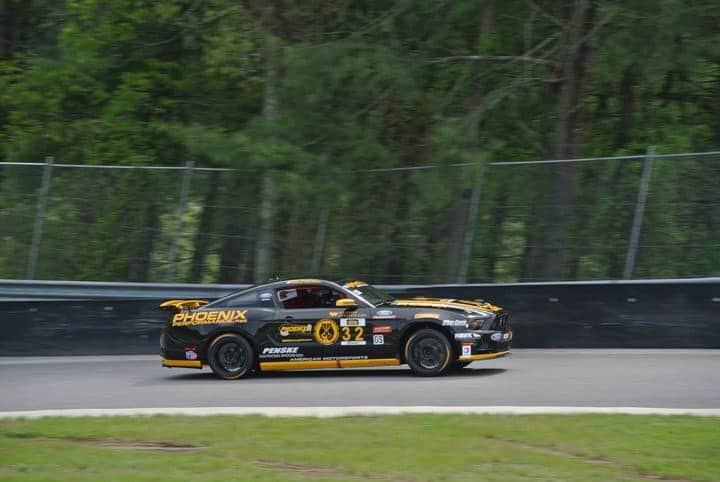 On Saturday afternoon, Andrew Aquilante proved that his pace on Friday was no fluke.  He may not have any definitive plans to race the No. 32 Ford Mustang BOSS 302R for the rest of the season, but for this weekend, he’s on top.

Aquilante started from the pole and held off Lawson Aschenbach for the entire 50-minute race to earn the weekend sweep.  It is the third consecutive year that Ford Mustangs have swept the GTS class wins at St. Petersburg (Jack Roush Jr. accomplished the feat last year, while Dean Martin and Spencer Pumpelly split the races in 2014).

Unlike the first race, Round No. 2 had some issues on track.  A full course caution was thrown roughly 20 minutes in after Jason Bell spun the No. 2 SIN R1 GT4 in the turns 11-12 complex at the end of Dan Wheldon Way.  While Bell was able to continue easily, the yellow was already out.

On the restart, there were a number of incidents.  First, Mantella Autosport’s Martin Barkey ran into the rear of Aschenbach while trying to make a move for second. The contact loosened up the rear bumper of the Camaro GT4.R while Barkey went straight at turn 9.  Barkey would resume and eventually finish 11th.

In addition, Ian James in the Panoz Avezzano and Anthony Mantella in the second Mantella Autosports KTM pulled off course with issues.  Finally, Bill Ziegler spun his No. 9 KTM X-Bow GT4 exiting turn 3.  Needless to say, all these incidents caused another full course yellow.

For the rest of the race, Aschenbach stalked Aquilante as his rear bumper continued to get looser and looser.  Pirelli World Challenge officials kept a close eye on the bumper as if it had come off, it could very well have caused an incident.  However, the lower supports kept the bumper attached to Aschenbach’s No. 10 for the duration of the race.  Aschenbach spent the last 18 minutes trying to make a move on Aquilante, but simply could not get to the back of the No. 32 Ford.

Behind Aquilante and Aschenbach was Parker Chase in the No. 19 Ginetta G55 in third.  ANSA Motorsports’ Frankie Montecalvo finished fourth, while Harry Gottsacker was fifth.

As of right now, St. Petersburg is the only race weekend that Aquilante and Phoenix Performance plans to compete at.  If that holds, then Aschenbach’s two second-place finishes puts him right at the front of the pack with a long break until the next race at VIRginia International Raceway at the end of April.