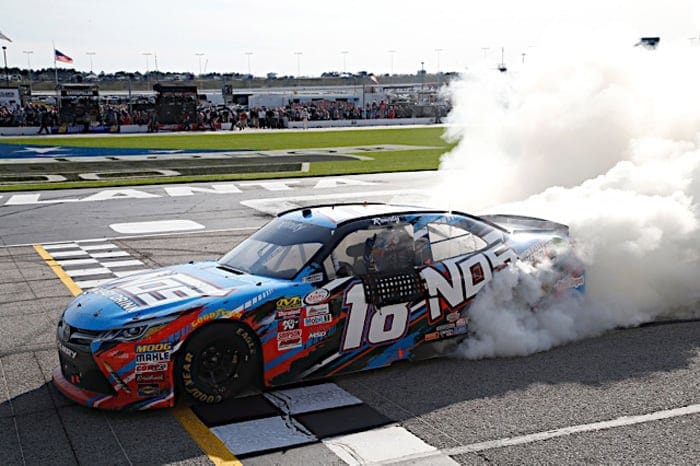 During the offseason, NASCAR created a rule limiting Monster Energy NASCAR Cup Series drivers with five or more years experience to 10 XFINITY Series events per season. The hope was adding that in-season limit could allow more full-time regulars to run up front.

Instead? So far it’s same old, same old as Cup full-timers are running roughshod over the competition.

Three races into the 2017 season, there doesn’t appear to be much difference in the final results. Two of the first three XFINITY races have been won by Cup veterans (Kyle Busch at Atlanta Motor Speedway and Joey Logano at Las Vegas Motor Speedway).

At Daytona, three of the top-five finishers were Cup drivers; in Atlanta and Las Vegas, that number rose to four apiece. In fact, over the last two weeks only one series regular, JJ Yeley, has even led a lap.

That’s pushed the controversy of Cup drivers racing in NASCAR’s lower series back to the forefront. However, some XFINITY regulars still feel their presence is productive, believing it’s necessary to help them develop and improve their skills.

“I still like having the Cup guys in the races,” said Justin Allgaier, who finished fourth and the best among series regulars in Saturday’s Boyd Gaming 300. “Hats off to Kyle [Busch], Kyle [Larson], Joey [Logano, race winner], and Brad [Keselowski]. Those guys are phenomenal racecar drivers and to be up there racing them at the end … Kyle Busch and I had a great battle there that last restart.

“It’s just fun [to have them racing you]. They’re not going to get any extra room, but they’re going to race you clean and it makes it a lot of fun while you’re out there.”

Stewart-Haas Racing rookie Cole Custer also approves of facing Cup-tier competition. Custer, 19, finished 11th after qualifying 20th at Vegas and feels over time the rules will work themselves out.

“I think we definitely need to have them,” he explained. “But I think it’s good how NASCAR is limiting it for the amount of races they can do. I think they can limit it a little bit more, but they’ve definitely done a good job and we still need to be able to race them.

“I think it will be better racing and for the fans when it’s just us in the [playoffs], but it’s really good to be racing against Cup guys.”

Not all XFINITY contenders favor having Cup drivers competing against them, though. Blake Koch, who finished 12th at Vegas, said XFINITY events have just as good a show as Cup races and don’t need a higher level of talent for the series.

“Now more than ever, the Cup guys have a big advantage in these cars because they drive like Cup cars,” Koch claimed. He’s right; the XFINITY car’s new downforce package comes with the smaller rear spoilers. “They get double the amount of track time and they handle like a Cup car.

“Iowa [Speedway] always sells out and is a standalone. I never complain, but I’m just giving my opinion.”

Roush Fenway Racing’s Ryan Reed, who was the first XFINITY regular to win at the season opener in Daytona, feels his No. 16 team will grow to compete with the Cup guys over time. The 23-year-old California native finished ninth at the 1.5-mile track and thinks they’re closing on top teams with Cup regulars.

That includes fellow Ford Racing rival, Team Penske, which was the winning group in Saturday’s race. Penske fielded two XFINITY cars with 2012 Cup champion Keselowski and Logano, both of whom ran circles around their competition.

“We’re catching them,” Reed said, unfazed by the gap in speed. “Jack [Roush, team owner] said we’re in championship form right now, so we’re not going to give up. The gap is closing and if we close the gap every week by Homestead, we’ll be right where we need to be.”

That championship round is when NASCAR hopes the new rules will kick things up a notch, fully eliminating Cup veterans from competing while clearing the way for XFINITY talent. With the elimination-style format, plus race wins earning an automatic berth into the next round, it’s imperative for series regulars to run up front.

But that transition is still six months away. Will the new rules give XFINITY regulars the boost they need before then?

I usually watch about the first 15 minutes of an Xfinity race. Once the Cup teams/drivers take over the top spots, I turn it off. Takes all the joy out of watching for me. Maybe they should limit Cup drivers to driving for regular Xfinity teams NOT in the top 20. Now that would benefit the teams, and really challenge the cup drivers, not to be driving the cream of the crop cars.

One of the best recent seasons was the year Kyle ran in his own equipment and put up a goose egg.

RIDICULOUS…….. CUP DRIVERS LED ALL BUT 1 LAP IN THIS RACE. LET ONLY THE XFINITY REGULAR DRIVERS RACE IN THIS MINOR LEAGUE SERIES RACE…

The problem isn’t necessarily the Cup drivers, its the Cup owners who bring major resources vs the majority of the Xfinity only teams. I mean look at teams like Ryan Sieg and Jeremy Clements drive for. They are family owned teams that have fewer total employees then the Cup teams have engineers alone. Its just ridiculous. Its not even a fair fight.