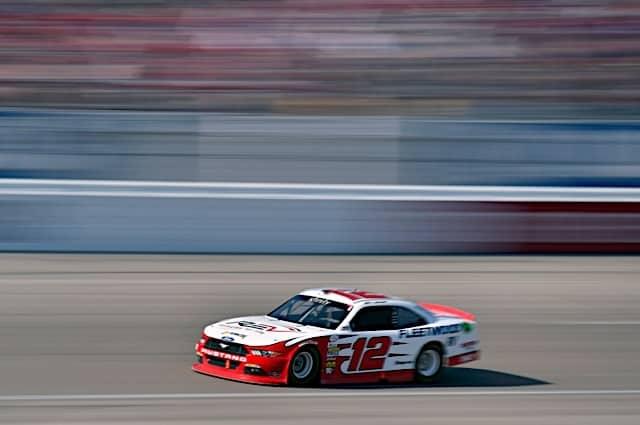 As the green flag flew on Saturday’s NASCAR XFINITY Series Boyd Gaming 300 at Las Vegas Motor Speedway, hometown racer Kyle Busch took the early advantage on the field. As the laps wore down in Stage No. 1, Kyle Larson had gained the second spot and began to close in on Busch.

With ten laps to go Larson was knocking on the door of Busch’s No. 18 NOS Energy Drink Toyota. Larson challenged Busch, got along side, and was just beat to the line at the end of the first stage by mere inches by the all-time series winner.

However, when the final stage came along, Joey Logano began the third and final stage out front, with Daniel Suarez along side.  XFINITY regulars began making their presence felt, as Suarez, Justin Allgaier and Darrell Wallace Jr. stayed consistently in the top 10.  Larson was still in the hunt, while Busch was further back.

Others were not as fortunate, as Brendan Gaughan, another Las Vegas native, reported a possible spark plug wire issue to his Richard Childress Racing team.  He would finish 35th, 11 laps down.

Despite a series of late-race restarts, Logano was never seriously challenged in the final 110 laps of the race.  Logano led 107 of those 110 laps on his way to his first career XFINITY win at Las Vegas.

Afterwards, Logano noted the overall tone of the race late in the going.

“It was hard to figure out what to do and what lane to pick, but the one thing we did know was we had a very fast REV Ford Mustang,” Logano said.  “[Crew chief] Brian Wilson and all the guys that bring this No. 12 car out, that’s three wins in a row for this car, so that’s something I’m proud to be a part of.

“Man, it’s a lot of fun to have these Team Penske cars fast again in this XFINITY Series. Man, it feels good. Those restarts were crazy, though. You don’t know what lane to pick. It depends on who is a good pusher, trying to remember what was going on the last one.”

Team Penske teammate Brad Keselowski was a contender in the race until he radioed to his crew early in the final segment, saying he felt a loose wheel. With 91 laps to go, Keselowski brought his No. 22 Mustang to pit road, with the crew later confirming a loose left-rear tire.  Now one lap down mired in 27th position, it looked to be a disappointing finish for the Michigan driver.

However, the green flag stayed out long enough that everyone had to make stops.  That allowed Keselowski to get back onto the lead lap.  The sixth caution of the day came with 39 circuits remaining, as debris on the backstretch slowed the field. This was a huge break for Keselowski and for rookie William Byron, who was the recipient of the free pass.

The leaders once again chose to come down pit road for what was their final stop of the day. Logano held the advantage off pit road over Larson, Busch, Suarez, Wallace, Ty Dillon and Ryan Reed. Logano made the decision to choose the inside lane for the next restart, putting the aggressive Larson to his outside.

Green flew again with 33 laps remaining, and Logano took the lead as Suarez swung to the middle lane hanging Larson out to dry. Caution flew again quickly though, as Ray Black Jr. spun in Turn 3, nearly collecting Dakoda Armstrong and others.

A slew of cautions in the race’s final 25 laps challenged Logano’s restart abilities, as choosing the right line became vital to who would be victorious in the event’s final segment. After choosing the outside and emerging the leader on three separate restarts, Logano again chose the outside on the day’s final restart after Tifft and Spencer Gallagher made contact in Turn 2.

The green flew with five laps to go and Larson made life as difficult as possible for Logano, as he ran along side for a full lap trying to gain the advantage. Finally in Turns 1 and 2 with four laps left, Logano surged ahead of Larson, pulling away to the finish.

Suarez piloted his No. 20 Interstate Batteries Toyota to a strong third-place finish as Busch faded late in the going. Allgaier and Austin Dillon also found their way by Busch in the waning laps to complete the top-five finishing order.

An ailing Wallace fought through flu-like symptoms to come home in sixth with Busch, the race’s pole-sitter, Elliott Sadler, Reed and Keselowski rounding out the top 10.

After three races, Sadler has a four-point lead in the standings over Reed. Byron is third, followed by Daniel Hemric and Wallace.  Tifft and Brennan Poole are tied for sixth, while Gaughan and Armstrong are tied for eighth. Cole Custer rounds out the top 10.

RIDICULOUS…….. CUP DRIVERS LED ALL BUT 1 LAP IN THIS RACE. LET ONLY THE XFINITY REGULAR DRIVERS RACE IN THIS MINOR LEAGUE SERIES RACE…

Did it seem to anyone else that the cameras spent a lot more time on the rest of the field when Busch wasn’t stealing all the time? When Logano was leading he was virtually ignored.