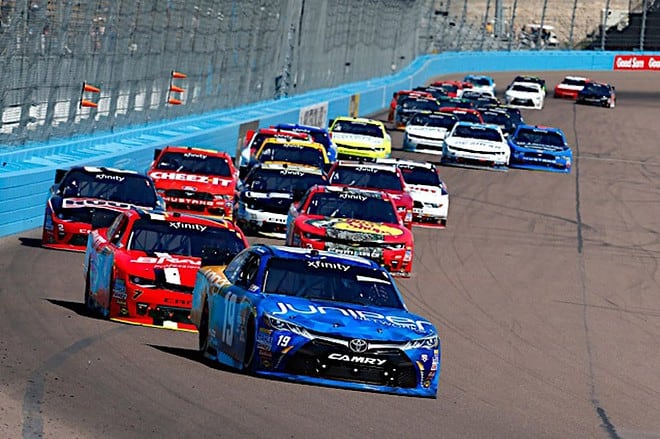 The NASCAR XFINITY Series will follow the Monster Energy NASCAR Cup Series for the fourth consecutive week, as the DC Solar 200 will take place at Phoenix International Raceway.

39 cars make up the entry list. 27 of those 39 are Chevrolets, with four Fords, seven Toyotas and one Dodge making up the remainder of the field.

Five MENCS regulars will participate in the race as well, those being Austin and Ty Dillon, Daniel Suarez, Ryan Blaney and Erik Jones. Ryan Reed is the only NXS regular who has gone to victory lane by virtue of his triumph in the Powershares QQQ 300. Kyle Busch and Joey Logano won at Atlanta and Las Vegas, respectively.

The DC Solar 200 can be seen on Saturday, March 18, 2016 with the green flag flying just past 4 p.m. ET. TV coverage can be found on FOX with radio coverage on MRN as well as SiriusXM.

Davey joined the site prior to the 2017 season and currently serves as a multimedia editor and reporter. He authors the bi-weekly column "Fire on Fridays" and spearheads Frontstretchs video content. He's covered the ARCA Menards Series East and West extensively for NASCAR.com and currently serves as a production assistant for NBC Sports Washington.
@DaveyCenter
Previous Beside The Rising Tide: Waiter, I’ll Have Whatever She’s Having
Next The 10: NASCAR Cup Series Power Rankings After Las Vegas