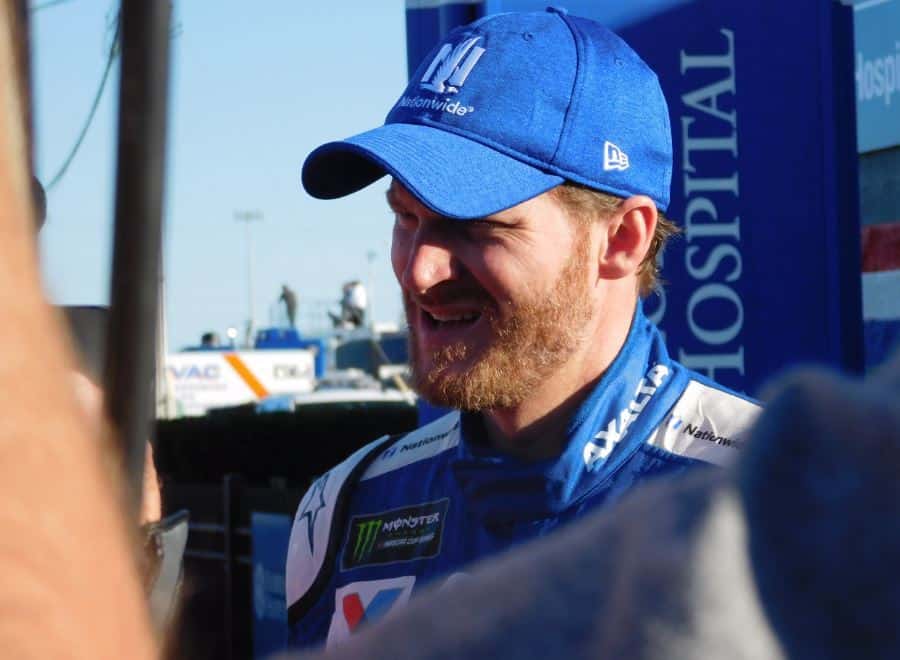 Will Dale Earnhardt Jr. Return to the Front for Good in Phoenix?

Considering it’s Phoenix International Raceway, the historians of the sport will be picking Earnhardt in their fantasy lineups. And there’s good backing to these predictions, as PIR is one of Dale’s best racetracks of the year.

In the past seven Phoenix races, the Hendrick Motorsports driver has finished top five all but twice. Sneaking into Victory Lane in 2015, that was his third at the track, and he backed it up with fifth place in this race last season.

The speed at this track, however, can span beyond just the driver. The No. 88 owned the most recent Phoenix race last November, when Alex Bowman led 194 laps from pole before losing the race win.

If you’re still having fun playing with odds after Las Vegas, put your money on Dale Jr. Not only does he and the car have the numbers, but the 42-year-old is still anxiously awaiting a strong run in his return season.

Daytona showed the most-expected strength in the draft, but crashed out along with most of the field early. Finishing 30th after issues in Atlanta, last week saw a decent 16th-place finish, a reasonable lead into this weekend.

So the drive is there. His teammates, Kasey Kahne and Chase Elliott, have seen significant improvement in their own right thus far while Jimmie Johnson may still have some ground to make up.

Phoenix could be the place where Dale Jr. kicks off his year of resurgence. The odds seem to be in his favor.

Is Kyle Larson the Best Driver in NASCAR?

Let’s say he is becoming legit.

Legit in a stable, consistent sense. From his thrilling rookie season in 2014, he still missed the playoffs. His 2015 slump saw only two top fives while last year finally saw him break through with his Michigan victory in August. Still, there seemed to be something missing from driver No. 42.

In 2017, the 24-year-old can be taken seriously as one of Chevrolet’s fiercest competitors every week.

Becoming the first driver to be on the wrong end of the final winning pass in three consecutive races, Larson has still brought the car home in stellar position.

Coasting to the line 12th in the Daytona 500, that is Larson’s only finish worse than third since Texas last fall [five races]. Included in the streak is back-to-back second-place finishes the last two weeks.

Is Kyle Larson on his way to being NASCAR’s top driver? It’s a tough prediction to counter, but let’s just start with Phoenix and see what he does from there.

Finishing third the last time out at PIR last fall, that is Larson’s only finish better than 10th in six total starts. Unfortunately for him, the most memorable moment from Phoenix was when Ryan Newman door-slammed him for a spot into the Homestead Final 4 in 2014.

Let’s just say he hopes to change that memory for his first trophy of the year. He’s one of the hottest drivers in the sport right now.

Will Chevrolet Earn First Win of 2017 at Phoenix?

If you haven’t picked up on it, Chevrolet is the center of most of these questions thus far. Both Earnhardt and Larson are on my watch list for this weekend’s 312-lapper. But to wrap up that conversation, I want to know when Chevrolet is going to win. It’s been a while since it’s been an “issue.”

The year was 2009 when Chevrolet last entered Week No. 4 without a win. With Ford and Toyota taking the first three races, it’s only the third time since 2002 the mega manufacturer did not win the opening three weekends.

Anything to be concerned about? Not too much, but there is concern for how easy they will get a manufacturer championship this year. They lost it last year to Toyota and look to have to earn it again this year, as Ford has become the top make in recent races.

Who is Chevy’s top driver-team and can they get their first win at Phoenix?

Having Kevin Harvick in their… whoops, nevermind.

OK, Phoenix may not be the best place for this “winless streak” to come to a close. In fact, only one current Chevy driver has won at Phoenix in the last 10 races dating back to 2011

For years, they set up a picnic in Victory Lane, knowing that Jimmie Johnson and Team No. 48 would come through for the win. He did so four times some 2007 to 2009.

And then they repaved and reconfigured the joint following 2010 and Johnson has only earned one top 10 in the last five races.

Based on 2017 results, Chevy’s best shot can come in the form of Chase Elliott or Larson. They are two of three drivers to earn multiple top fives already this year and are second-third in points.

To put a sticker on this Chevy envelope, it may have to put a day for the kids or a return from Dale Jr. to put Chevy back on top.

This one just had to be included.

Kyle Busch and Joey Logano gave Texas Motor Speedway and track president Eddie Gossage some good PR for their upcoming race weekend in a couple weeks. Heck, the whole sport is sizzling after the pit road brawl and we have two more guys to watch closely on Sunday.

Though their may not — and hopefully wont be — Kenseth-like payback coming for Logano again in the future, most of the sport is OK to see an occasional punch or two. We do only see them once or twice a season, so if some do see it as a problem, it’s not a major one.

When it comes to the lack of penalties, again, it has gone both ways from fans and media. If NASCAR did penalize one or both drivers, the timelines and airwaves would reek of complaints: “Why are they penalizing them? This is great for the sport you dumb-dumbs!”

And when they weren’t penalized, many have exclaimed “They should’ve been penalized! This is inconsistency! What do I tell my kids?”

Though it may be this week’s topic for outrage, it’s something to keep in mind for the rest of 2017. It’s what new series sponsor Monster Energy said when they announced their partnership in December. They want raw emotion.

And the fans seem to feel similar. They want free speech, no political correctness and a platform to see the drivers do what they want… until it happens. Now that’s inconsistent.

If you’ve ever had the pleasure to stand behind the stage of driver introductions, you’ll see the family atmosphere that is NASCAR. They all spend each weekend in the mini-neighborhood known as the racetrack motorhome lot and you see all the kids and smiling faces every prerace.

But when they strap the helmet on, they’re not quite like you and me anymore. The adrenaline, the danger, the speed and the remarkable drive of competition can do a thing or two to that smiling face on the driver intro stage.

Will we see more of what happen on Sunday this Phoenix weekend? The lack of penalty certainly wont hurt the chances, but every race since 1949 has that potential. And there’s nothing wrong with that.

I’d be fine with Earnhardt winning at Phoenix but anyone who doesn’t think Harvick isn’t the odds on favorite hasn’t been paying attention for the last five years.