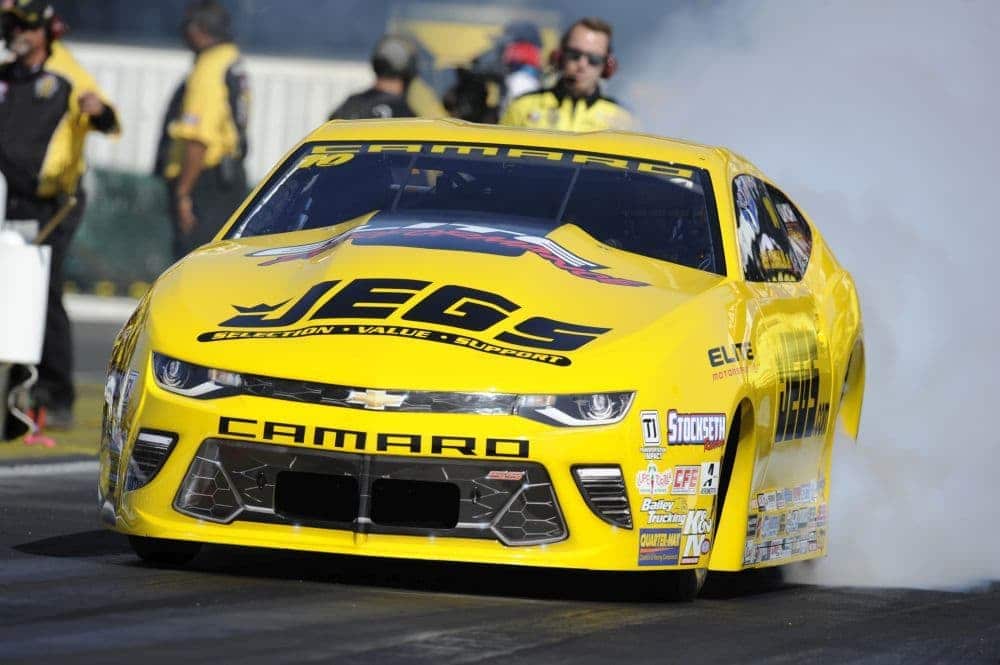 Last year, KB Racing absolutely dominated the Pro Stock class, taking home the class championship with Jason Line while teammate Greg Anderson finished the season right behind him in second spot. The two years prior to that, however, belonged to Elite Motorsports and two-time champion Erica Enders.

Elite had high hopes after adding five-time champion Jeg Coughlin beside Enders, but a switch from their tried and true Camaro to the Dodge Dart proved to be a disaster, as both drivers struggled to get beyond the first round on elimination day all year. The Dodge partnership ended and the team has returned to their familiar Chevrolets this season.

After two races in the Camaro, does it look like the Elite crowd might be ready to take it to the KB team this season? Well, Enders made it to the semifinals where she lost to Greg Anderson in Pomona, but suffered tire shake and fell out in the first round at Phoenix.

Coughlin also fell to Anderson in Pomona, one round before his teammate, but made it to the semifinals in Phoenix where he lost to Drew Skillman. It’s early, but I would call that improvement over last season already.

The Camaro has changed since Elite last rode one to a championship two years ago. Pro Stock has changed. Fortunately it’s not a cold return as the third Elite car, piloted by Vincent Nobile, stayed with the bowtie last season and finished the year fifth in the standings.

“All three cars have started well and we’re all in the top 10 in the Mello Yello points, so we’re happy,” said Enders. “Most of all, we’re still having the best time, hanging out and racing with each other. I wouldn’t trade this group for anything.”

* Be sure to get your votes in for your favorite Pro Stock driver for the K&N Horsepower Challenge, the all-star event for the class which will take place on Saturday, April 1, during the DENSO Spark Plugs NHRA Nationals from The Strip at Las Vegas Motor Speedway.

Go to http://www.nhra.com/KNChallenge to cast your vote. Voting ends on March 27th at noon, Eastern time.

2012 – Won four races and became the first female to win an NHRA Pro Stock race; one of the two women to claim wins at the same event in Seattle; two time No. 1 qualifier; finished fourth in points.

2005 – First female to reach a final round in Pro Stock; won eight rounds in her rookie season.

Some Things Most People Don’t Know About Erica: Actually most people do know that Erica was the subject of the Disney movie Right on Track, a movie that focused on the challenges and triumphs of females in male dominated sports. Erica and her sister Courtney did all of the “stunt” driving for the movie and were on set for the entire six weeks of filming. She still has fans coming to the pits to this day telling her they saw the movie as it still airs on Disney Channel.

The NHRA J&A Service Pro Mod Series also hits the track for their season opening event this weekend at the Gatornationals. This class is always hotly contested and continues to grow in popularity every year. Video one gives a good preview of the class for 2017 including the much anticipated debut of the four-wide format for the Pro Mods, while video two outlines another of the stories to watch this year, the arrival of radial racing start “Stevie Fast” Jackson, who will run the full NHRA Pro Mod schedule. If you don’t know who Stevie Fast is, this is a good introduction.