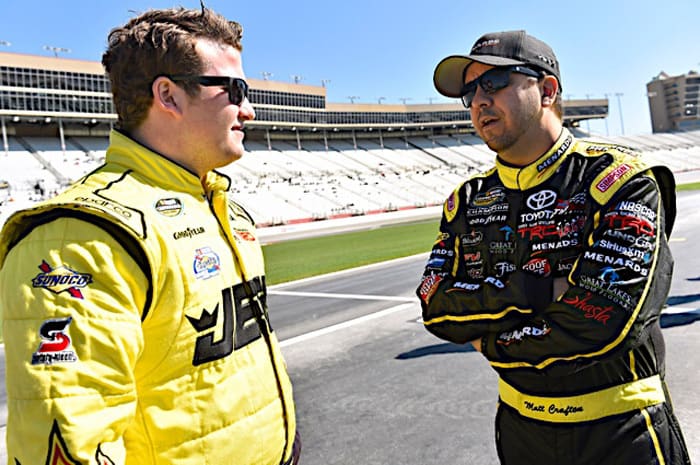 Matt Crafton has seen talent come and go during his career in the NASCAR Camping World Truck Series — and he’s seen others go on to achieve their ultimate goal of moving to the Cup Series.

This year, 2017, marks Crafton’s 17th consecutive full-time season in the Truck Series, 16 of which have been with ThorSport Racing, the longest current tenure with one team in the series. The only season that the 40-year-old ventured outside of the Sandusky, Ohio race shop was in 2004, when he made the move to Kevin Harvick Inc., and finished fifth in the championship standings.

Paired with Duke and Rhonda Thorson since 2001, Crafton has seen plenty of change at. In just a single season, half of the driver stable has switched. Rico Abreu and Cameron Hayley have since left the organization, as Cody Coughlin and Grant Enfinger have been welcomed in.

Abreu and Crafton’s relationship was well documented in Abreu’s rookie season last year. Though he only had five top-10 finishes in his first full NASCAR season, the 25-year-old often leaned on the two-time Truck Series champion for advice and any questions he might have throughout a race weekend.

Crafton enjoys playing the role of mentor to any driver that wants his words of wisdom.

“I was once a rookie coming in and asking questions about trying to figure it out,” Crafton told Frontstretch. “A lot of them know a lot more than me already and they have only been here for a year. Others don’t come over and ask for advice, so more power to them. But the ones that do want advice, I’ll tell them everything I know.”

The competitors asking for advice vary from track-to-track. The younger drivers may not know how their truck will handle on a track that the series had previously gone to due to inexperience. That’s where the veteran comes in hand.

Crafton has no problem lending a helping hand to drivers that he competes on a weekly basis. Veteran knowledge can be useful for drivers that have never dealt with the handling of a Truck Series vehicle.

“Each and every week what they expect from the race track and how the trucks are going to race in packs,” Crafton said. “These trucks drive so much different by themselves than from in packs each and every week.”

Though the youngsters of NASCAR come to Crafton for advice, he rarely ever goes to them for the same reason. Instead, he will go to veterans in the Cup Series, and ask them questions because it is likely they even have more experience than him on that particular track.

“I just worry about doing my job and win races and contend to win races every week,” he said. “I’ll worry about it from there. I could honestly care less how I’m viewed, as long as I represent my sponsors and my team owner correct. Throughout the garage, it’s not that big of a deal.”

While there has always been constant change at ThorSport, Crafton has remained loyal to the Thorson family, as they have done so in return to him. Prior to the California native taking over the No. 88 truck, Terry Cook was their driver, competing in three full-time seasons. picking up a victory at Flemington Speedway in 1998.

Since Crafton has strapped in behind the wheel for the team, he has won two championships, becoming the only back-to-back champion in series history for  the 2013 and ’14 seasons. He has piled up 13 of the organization’s 23 wins, and finished in the top 10, 59 percent of the time.

Sticking with ThorSport Racing has allowed Crafton and the Thorson family to rely on one another through thick and thin.

“Duke [Thorson] said we were always going to run it like a business and that each and every year we are going to make it better, but we are not going to over-extend ourselves,” Crafton said. “That’s why whenever ThorSport started, it was in a small garage and now it’s in probably one of the nicest, if not the nicest garage. I would put it against a lot of the XFINITY teams and a lot of the Cup teams with how nice the shop is we have to work in. Just to see where the team came from to where it is now, it’s just amazing.”

The Truck Series is idle until Martinsville Speedway on April 1, where Crafton is a two-time winner, most recently in 2015. Many of the competitors in the Truck Series have little-to-no experience at the paperclip, which will mean school will be in session with the former champion teaching the young guns.