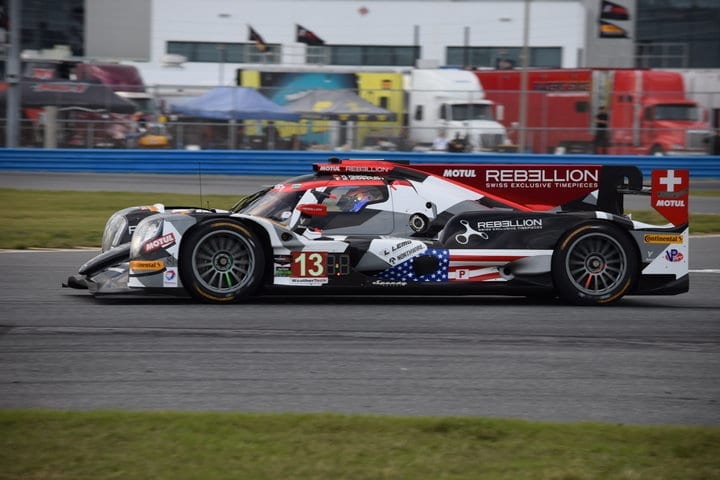 While Jani is very happy with his qualifying run, he still thinks the Cadillacs are the cars to beat once the endurance event gets underway.

“We were close in Daytona. This time it was enough to get the pole. I was missing that pole position here so I’m happy to finally have grabbed it,” Jani said after the session.  “The race is a whole different thing. We saw that at Daytona. The Cadillacs destroyed us out there. To be honest, I think we are not the favorite. Those new Cadillacs are very good and the Nissans look very strong. If you look at the times, I think it will be very tight. I’m up front right now and I will try my hardest to stay there.”

Fittipaldi was on a quicker lap than Jani at the end of the session, but ran out of fuel.  According to IMSA Radio’s Jim Roller, Fittipaldi was incensed upon getting back to the pits.  He got out of his Cadillac DPi-V.R. and stormed off after being informed of the fuel issue.  Fittipaldi punched the pit box belonging to C360R in the process (Note: C360R’s pit box was there for the Continental Tire SportsCar Challenge’s Sebring 120, which rolled off an hour after the qualifying session finished).

Pipo Derani very well could have qualified on the overall pole in Tequila Patron ESM’s No. 2 Nissan DPi.  During the session, he was six-tenths of a second quicker through the first two sectors than Jani, but suffered a mechanical failure that forced him to pit at the end of the lap.  Derani officially did not put a lap in the session and will start at the rear of the prototypes on Saturday.

In Prototype Challenge, a battle between BAR1 Motorsports’ No. 26 and Performance Tech Motorsports’ No. 38 seems to be setting up.  Gustavo Yacaman and James French swapped fast times throughout qualifying.  Late in the session, Yacaman set a time of 113.506 seconds (118.619 mph) and let French take shots at it.  While French was able to improve his time, he came up less than seven-hundredths of a second short.  Buddy Rice qualified third in PC, 2.3 seconds off the pace.

In GT Le Mans, the Ford Chip Ganassi Racing squad seems to be the team to beat.  Dirk Müller was the early man in front running the No. 66 Ford GT, but teammate Ryan Briscoe turned in a lap at 115.939 seconds (116.130 mph) to win the GT Le Mans pole.

Briscoe’s lap was a quarter of a second faster than Müller, who completed a front-row sweep for Ford.  Corvette Racing’s Tommy Milner was third in the No. 4 Corvette, followed by Porsche’s Kevin Estre.  Antonio Garcia for Corvette Racing rounded out the top-five starters.

In GT Daytona, the times were way faster than they were in practice, and way faster than qualifying last year.  By the time the dust settled, Tristan Vautier waltzed out of the session with a somewhat surprising first-ever class pole for SunEnergy1 Racing.  The real surprise was actually just how fast Vautier went.  His best lap of 119.738 seconds (112.446 mph) is a new class qualifying record by about 2.5 seconds.

Montaplast by Land-Motorsport’s Connor de Phillippi was second fastest, three-quarters of a second slower than Vautier.  By GT Daytona standards, such a margin is highly unusual.