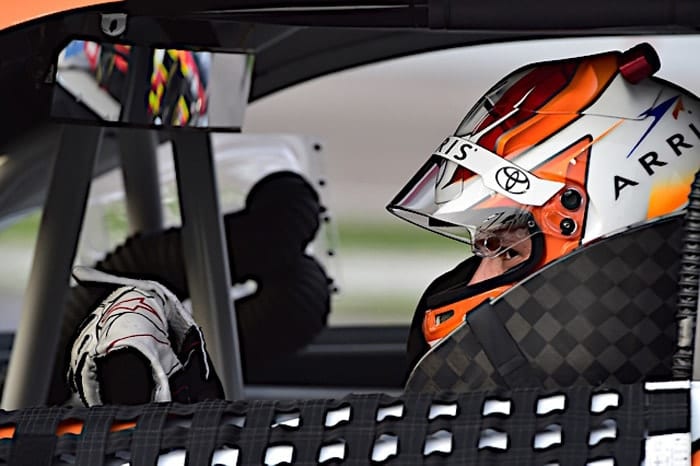 Although he’s not running for the NASCAR XFINITY Series title again this year, it doesn’t take away from the frustration the 2016 series champion Daniel Suarez felt at Phoenix Raceway on Saturday.

Suarez, in the XFINITY No. 18 Toyota for Joe Gibbs Racing, struggled all morning in both the Monster Energy NASCAR Cup Series XFINITY series. In the final Cup practice, he spun his No. 19 in Turn 2, although he managed to avoid contact with anything.

Then, he was unable to record a lap during XFINITY qualifying because his car didn’t get through inspection quick enough. He started the DC Solar 200 from 34th position, which was determined by owners’ point standings.

Once the 200-mile race started, Suarez found himself in early trouble. He went three-wide between Jeremy Clements‘ No. 51 on the outside and Ross Chastain’s No. 4 on the inside on the backstretch in one of the opening laps and made contact with Clements’ car entering Turn 3.

He nearly spun in the middle of the corner and his right quarter panel suffered damage after contact with the outside wall, but he managed to straighten out the No. 18. However, the right rear damage was enough to give him a tire rub for a few laps, and on Lap 12, the tire blew, and he endured a hard collision entering Turn 1.

“I don’t really know what happened. I just know that I wasn’t racing yet,” a disgusted Suarez said. “The 51 hit me in the right rear, and then I had a flat tire, and I hit the wall. Just a little disappointed at the way that those guys race back there. It’s way, way too early in the race to be racing like that.

“We had more than 150 laps to go. … what happened there is just … I don’t know. I have no idea what happened. There’s nothing I can do at this point.”

The track conditions were slippery in the 90-degree desert weather, but he said that didn’t play a part in his race-ending wreck because “everyone’s aware that the race track is hot and slick.”

He said he felt OK after the hit, but ended up 39th on the day.

“I just have to relax and think about tomorrow,” he added.

For Sunday’s Camping World 500, the Monterrey, Mexico native will start from the 27th position.