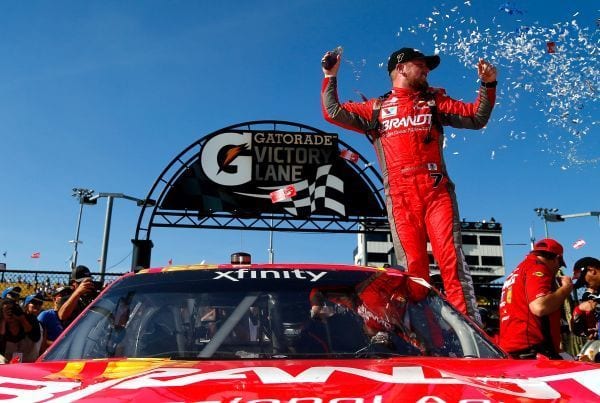 Justin Allgaier snapped an 80-race winless drought, spanning more than four years on Saturday afternoon from Phoenix International Raceway by winning the DC Solar 200. He led a race-high 85 laps and earned the $100,000 bonus from XFINITY for being the Dash 4 Cash winner, the first of four races this season that will pay out the bonus.

But it wasn’t a walk in the park.

He had to survive three late-race restarts and needed to hold off a couple Monster Energy NASCAR Cup Series regulars in Ryan Blaney and Erik Jones to earn the win.

“You have no idea how proud I am of you,” Allgaier radioed to his team on the cool-down lap before celebrating with a burnout, the first one he’s done in almost half a decade in the NXS.

“Last year was tough,” Allgaier said after the race. “You know, we had really good runs all year and never were able to get to Victory Lane. But these guys fought hard. This is a team effort. We had four really good JR Motorsports hot rods today.” All four of JRM’s Camaro’s finished inside the top ten in the valley of the sun.

Another MENCS regular, Daniel Suarez, had his day end early on lap 11 after contact with the No. 51 of Jeremy Clements cut a tire down on the No. 18 of Suarez. The damage was beyond repair, and the Monterrey, Mexico native came home dead last in 39th place.

And then caution does come out for @Daniel_SuarezG after a hard hit.

Erik Jones was victorious in stage one. William Byron and Elliott Sadler were the two highest-finishing NXS regulars in third and fifth, respectively, qualifying them for the Dash 4 Cash bonus.

But the highlight during the 60-lap opening stage was the fastest car on track: Ryan Blaney. He started in 33rd due to inspection issues forcing the No. 22 to miss qualifying, but was inside the top five in no time. He finished fourth in stage one, behind Jones, Austin Dillon and Byron.

Stage two saw the aggressiveness ratchet up with two more Dash 4 Cash spots available. Brendan Gaughan and Matt Tifft brought out the third caution of the afternoon on lap 85. Immediately before the yellow flew, Allgaier took the lead from Dillon’s No. 2 Chevrolet.

Blaney ultimately won the second 60-lap stage, followed by Allgaier, A. Dillon, Sadler and Jones rounding out the top five. Allgaier, the eventual winner, and Tyler Reddick, became the final two drivers to qualify for the Dash 4 Cash bonus by being the highest-finishing XFINITY regulars who hadn’t already qualified for the bonus at the conclusion of stage two.

Reddick, who finished sixth in stage two, is running a part-time schedule for Chip Ganassi Racing. But the D4C rules indicate that a driver is eligible for the bonus if they declare for points in the NXS, regardless the number of races they run.

Dillon, Blaney and Allgaier were under a blanket and swapping the lead for most of the third and final stage. Those 80 laps saw cautions beginning to breed cautions, setting up restarts that made for great, close quarters racing and, unsurprisingly, more cautions.

Mario Gosselin and David Starr got into trouble in Turn 3, allowing Allgaier to tease what he could do on restarts. The No. 7 momentarily took the lead from the No. 2, but Dillon prevailed. With 45 laps to go, Joey Gase brought out the sixth caution of the afternoon, setting up a final round of pit stops along the long, winding pit road on PIR’s frontstretch.

Everybody pitted, but strategy varied. Tifft stayed out, while the first four off pit road took only two tires, and Allgaier was the first car off pit road with four fresh Goodyear Eagles.

Those tires proved to be the difference, as the No. 7 rocketed from sixth to the lead on that restart. It looked as if Allgaier had this one in the bag until Drew Herring brought out another yellow flag with 33 laps to go.

Perplexingly, Allgaier chose the inside lane on the restart, allowing the No. 20 of Jones to pass him on the outside. Lucky enough for Allgaier, Blake Koch’s spin while racing Brandon Jones in Turn 1 with 15 laps to go brought out another caution, and a chance to redeem himself.

On the restart, the Riverton, Ill. native took the top spot away from Jones once again, but Austin Dillon sustained major damage after the No. 00 of Cole Custer got loose entering turn one and clipped Dillon. That brought out the 10th and final caution of the day at Phoenix. The clean-up was extensive, so NASCAR put displayed red flag for five minutes to clear the debris.

Under this caution, Dillon showed his displeasure to Custer by cutting him off on the track and creating minor damage to the No. 00 of Stewart-Haas Racing. Custer took blame for the incident, saying it was “100 percent my fault.”

NASCAR immediately parked Dillon for the rest of the race and called the driver, spotter and crew chief to the hauler post-race. Steve O’Donnell told reporters on Friday that NASCAR would prefer drivers to settle disputes on pit road physically rather than using their race cars as weapons.

Once the red flag was lifted and the clean-up was sufficient, the green flag flew with four laps remaining in the DC Solar 200. Allgaier learned his lesson, took the top lane on the restart, and cruised to Victory Lane for the first time since midway through the 2012 season.

“I was kind of fighting for my life really,” third-place finisher Erik Jones said post-race. “The first segment we were really good, but everyone else seemed to made adjustments and we couldn’t get much better. Just kind of lacked a little bit of speed.”

The XFINITY Series is back in action next weekend from Auto Club Speedway in Fontana, Calif. on Saturday March 25 for the final leg of “NASCAR Goes West”. Green flag is scheduled to fly just past 4 p.m. ET. Austin Dillon is the defending winner. 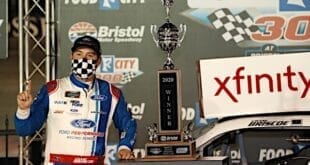 Xfinity Breakdown: Chase Briscoe Has All the Momentum