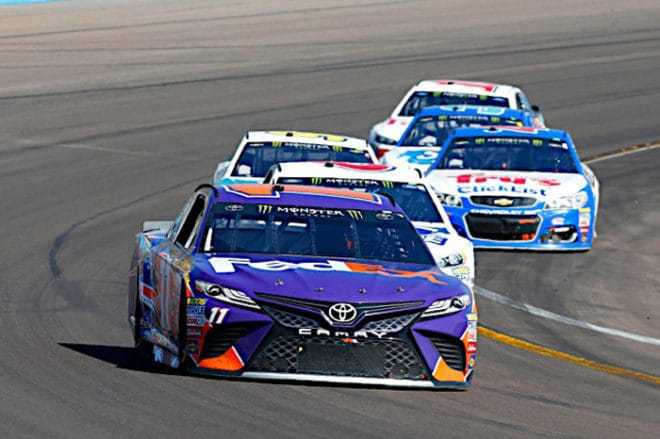 Another week, another downward-trending television rating for the NASCAR Cup Series. This week, however, there is a good reason for it.

That may seem like a pretty steep drop-off, especially considering the fight the previous week at Las Vegas Motor Speedway between Joey Logano and Kyle Busch, but this year NASCAR went up against the NCAA Tournament at Phoenix as opposed to last season. In 2016, the spring race at Auto Club Speedway went up against March Madness and had a 4.0 rating with 8.6 million viewers.

The race at Phoenix was still the second most-watched sporting event of the weekend, finishing behind only the tournament in the ratings.

The ratings didn’t all go down for NASCAR programming this weekend, however. The NASCAR XFINITY Series race at Phoenix was watched by 1.85 million viewers, slightly up from 1.82 million last year.

I have to admit that this news of the steep decline in viewership from last year was a total surprize. NASCAR and FOX used the “event” from the conclusion of the Vegas race as publicity for the Phoenix race. Knowing some of these 18-34-year-old males that Monster caters to, and that NASCAR is trying desperately to attract, I would have bet the farm that the Phoenix race would have had double, and even triple, the viewership of last year. As I said in a previous post last week, this particular male demographic can’t wait to get into a situation where they would have a chance to throw a fist at someone. Saying that, with NASCAR and FOX using that fight between Logano and Darrell Waltrip’s love child as publicity, those young guys should have tuned in, hoping to see round 2.

I guess I was wrong.

Bill B
Reply to  Ken

You don’t give the 18-34 group much credit do you? BTW I am mid-50s so it isn’t personal.
You’d have to be pretty gullible to think that just because there was a “fight” (laughable as fights go) last week, that the next week would be a guaranteed rematch. It rarely works that way.
Plus, is it worth sitting through a 3+ hour race that you wouldn’t watch otherwise just because there might be a 1% chance of something extraordinary happening? Heck, you could say that most weeks… there is a1% chance that something interesting will happen.
No, I’d say that you should count on negative ratings and attendance until November and then MAYBE there could be a small chase bump.

So last week the excuse for the ratings decline was that the Las Vegas race was run on the corresponding weekend as last year’s Phoenix race.
Fast forward to this weekend and the excuse is that the Phoenix race was up against the NCAA tournament as if it is the first time in history that a NASCAR race has been run at the same time as the tournament.
Aren’t about two-thirds of these races interchangeable anyway? Does it really matter that one year a race is at Las Vegas and on the same weekend the following year it is at Phoenix?

Not like the product on the track has improved. Same song different day, same racing.

So the viewers increased slightly for the Busch series product. Maybe not enough viewers knew Kyle wasn’t in the event.