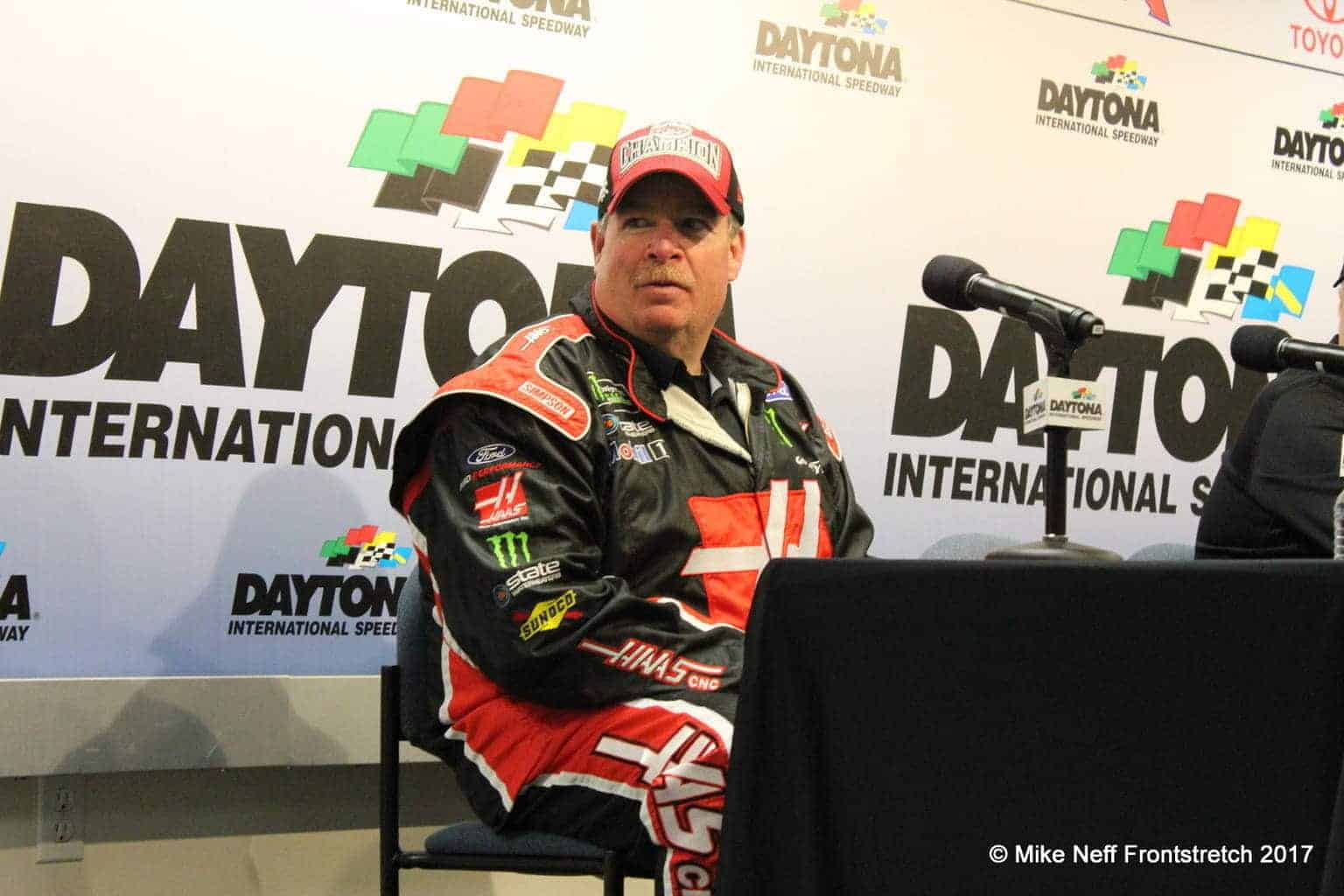 The Monster Energy NASCAR Cup Series is very much an exercise in, “What have you done for me lately?” Even if you win the biggest race of the season, you have to get right back after it the next weekend.

Tony Gibson and his No. 41 team, driven by Kurt Busch, had very little time to revel in the afterglow of their win in the Daytona 500 before they were mixing it up at Atlanta Motor Speedway. They have had some challenges the last couple of weeks and that has hurt their performance, but they are still a team to contend with on the racetrack each week.

Gibson reflects on the challenges his team overcame during the Daytona 500 this week and details the extraordinary obstacles his team had to surmount to wrangle their finish at Phoenix International Raceway. Gibson also highlights the importance of tires and provides a little insight into fuel mileage with the new aero package.

Mike Neff – Explain how you get in a wreck, barely beat the five-minute clock and then manage to make a late-race move to win the Great American Race.

Tony Gibson – It was a crazy day for sure. We went through a lot. We had a really fast car the whole time. We ran really well in the qualifying race and had good speed in the 500. We just overcame a lot during that day. It is a long day and a lot of things can happen.

A lot of things did happen to us. Nothing really too big happened, just a scrape on the right side, here and there, but nothing catastrophic. We were able to put ourselves in the right position at the end, and Kurt made a heck of a move on the No. 42 car [Kyle Larson] there. The [No.] 21 [Ryan Blaney] got stalled out and a couple of them stumbled on fuel. Opportunity put itself out there and we just took advantage of it. It was a crazy and nerve-wracking day, but in the end it was a great day. It was really unbelievable.

Neff – Phoenix is a day you might want to forget. However, you overcame some difficulties and ended up better than you could have thanks to getting back on the lead lap. Was it your battery or alternator that failed?

Gibson – It was the alternator. The same thing happened in Vegas; about halfway through the race our alternator quit working. We kind of had to go through the same thing there. In Phoenix it quit on Lap 10 so we ran off of our batteries. We were just a little more prepared for it this time. We almost made it off of pit road without going a lap down the first time. We got a little better at it and we eventually got back on the lead lap.

We had to change a few batteries; we went through nine batteries in that race. It was a long day, and it was hard on Kurt because we had to shut all of our fans off and cycle them. The car shut off a couple of times. It was a long day, but we were in 17th at the last caution. We were going to take on two [tires] and try and gain a few spots; unfortunately, we got blocked out of our pit stall by the [No.] 18 car [Kyle Busch]. That kind of killed our day there.

We did manage to stay on the lead lap and finish, [but] it wasn’t the finish we wanted. We would have been happier to finish a little further up with the way things were going. That deal on pit road closed that out. It is just one of those things. [The] Roush-Yates engine department is working on it trying to figure out what is going on and what we have to do to fix the problem. We’ll get there; those guys are pretty damn good. They’ll figure it out and we’ll be fine.

Neff – Is it normal to have nine batteries at your disposal or were you scrambling to borrow some from the other SHR teams?

Neff – It seems like every team has at least one alternator failure at some point. Is it really that crucial to have a small alternator? You save three or four pounds by having the small alternator vs. the big one but you end up throwing away a lead one race during the season.

Gibson – It has nothing to do with how big it is. Alternators are just like cellphones or anything else: they are just as good as the heavy ones that we ran back in the day. It really doesn’t matter on the size, it’s just about how the guts are put together and how many amps they can handle. Everybody has these problems from time to time. It just so happens that we have had some problems here lately. The No. 4 [Kevin Harvick] and the No. 14 [Clint Bowyer] had to replace theirs Sunday morning before the race because theirs went bad. I guess I should have changed mine out too, looking back. … It is a part failure, just like a valve spring or anything else. They’ll figure it out and we’ll be better.

Neff – We now head to Auto Club Speedway with its big, long, sweeping turns, where we’ve had races come down to fuel in the past. With this new aero package, has less rear spoiler in the air improved your gas mileage on the two intermediate tracks that you’ve run on so far?

Gibson – Fuel mileage goes hand in hand. We have less drag down the straights, and that helps. However, we also have a lot tighter racecars mechanically, because the toe in the rear end housing is gone so we don’t have that help for on throttle rotation. Our cars are looser in and tighter off. Any time you’re really tight you’re burning fuel, too. If your car is driving really good, your fuel mileage will be good with this package, but we’re not seeing a huge difference in the mileage right now. It won’t be so big that it will be noticeable.

Neff – With this new package, to the casual observer anyway, it seems like the first two or three cars have a significant advantage over the rest of the field. Once you get back into the field it seems like the cars are racier than they have been in a while. Are you feeling like clean air is almost as important now as it was in 2015?

Gibson – Yeah, the more downforce they take off of the cars the more aero dependent they’re going to be. That is just a fact. The more they make these cars ill-handling the harder it is going to be to run around somebody. When you go down the interstate and get behind a tractor trailer, you know how your car shakes and moves around? Every time you get around a racecar on the track it does the same thing. Every time they take downforce off of the cars it just makes it worse. It isn’t going to get any better by taking downforce off of the cars. The only way to make it better is to put downforce back on them so they can race around one another.

Neff – Do you run the multi-zone tires at Auto Club Speedway?

Gibson – We run the multi-zone tires at Atlanta and Vegas. We don’t run them at California, and I’m good with that.

Neff – Auto Club is a worn-out racetrack. We saw it at Atlanta, even five laps into a run, that if you can get tires you’re going to take them. Is it to the point at California that it is a significant detriment if you don’t take fresh tires?

Gibson – Oh yeah, it will be huge. It will be absolutely huge. Someone will be two seconds faster on new tires than a guy on 20-lap tires. That difference will be huge.

Neff – Speaking of tires, were you surprised to see Ryan Newman hold off the field on tires that had over 50 laps on them?

Gibson – Not really. On a green-white-checkered like that, with guys who only took two behind him, some took no tires and some took two before you got to the guys with four tires. What happens is the leader starts first and you aren’t allowed to beat him to the line. You have that two- to three-car advantage you can gain by jumping out there. By the time they can recoup it, there is somebody racing those guys. They end up racing each other and forget the leader is running clean air. They end up beating and banging and fighting for spots. The guys on two tires ended up racing one another and fighting off the guys who took four. It just worked out for him. It didn’t surprise me at all.

Neff – When you set up for Auto Club, how significant is it, with the dependence on aero, to keep the car on the ground? Do you have to build in extra rebound into the shocks and springs that you don’t have to on tracks that have fresher pavement and less character?

Gibson – No, you just have to be more compliant with everything, whether it is shocks or springs or air pressure. The softer you can make everything, the longer the tires will last. It will be easier on the tires and give the car more grip. You’re trying to make everything as compliant as you can. You build it into the shocks, springs, air pressure, sway bars, everything, so that it can move around and be real compliant.

Neff – Switching over to Fords caused you to have to change your cars around to work with the hardware from the Blue Oval. From your perch on the box, is there anything different on the crew chief side for how you call the race and make adjustments vs. another manufacturer?

Gibson – No, it isn’t really any different, as far as crew chiefing. We have a lot more tools from Ford than we did with Chevy, different tools. The support of engineering and the photos and videos from the racetrack each weekend are really, really good. It is not really any different on race day. You go about your day the same way and call the races the best you can. Whether it is a Ford or Chevy doesn’t matter.