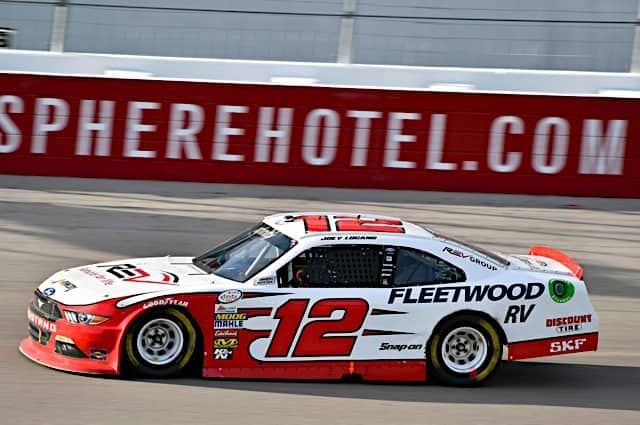 Joey Logano has been on the receiving end of plenty of misfortune to start the 2017 season. However, based on the results of XFINITY Series practice at Auto Club Speedway on Friday, it seems possible that the tide may be turning in his favor.

Logano posted the fastest time in the opening round, putting down a lap of 40.245 seconds (178.904 mph). Logano was fastest in nearly every category. He had the best overall lap in both sessions. He also had the top five lap average and the top 10 lap average over the course of the round.

Custer spent some time Friday morning meeting with NASCAR officials and Austin Dillon discussing his run in last week with Dillon. Custer, by his own admission, got into Dillon accidentally. Dillon was parked after making contact with Custer under caution. Still, Custer insisted that there were no hard feelings after the meeting.

“It (the meeting) went really good. We both had things we wished we had done different in the moment.” Custer said. “It is what it is.”

In the second round of practice, Logano posted a lap of 40.723 (176.804 mph) to top the charts. He bested the Joe Gibbs Racing Toyota of Jones by just .014 seconds. Menard was third fastest, Brandon Jones fourth, and fifth fastest was Larson.  Logano also had the fastest 10-lap average once again

Qualifying for the XFINITY Series Service King 300 is scheduled for 12:30 p.m. ET on Saturday (9:30 a.m. local time). The race is scheduled to go green shortly after 4 p.m. ET. Live coverage of the event will be carried on FOX Sports 1.