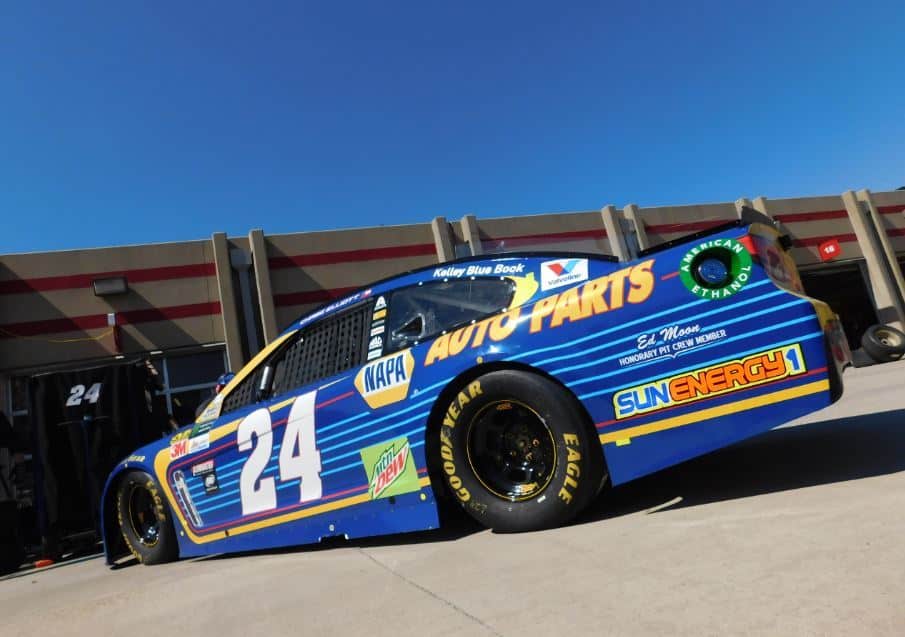 Chase Elliott found the fast way around Auto Club Speedway Saturday afternoon, but he also found that one little misstep can ruin an otherwise good day. Just minutes into the final practice session, Elliott found himself on top of the Monster Energy NASCAR Cup Series time sheet with a lap of 38.404 seconds (187.480 mph). Just a few minutes later, Elliott’s No. 24 NAPA Chevrolet was headed behind the wall with major right side damage.

Fox Sports 1 picked up on team radio in which Elliott said to Crew Chief Alan Gustafson, “Something’s broke. It has to do with the brake pedal…”

Elliott later said to Fox Sports 1’s Jamie Little that something in the left front broke.

Though body damage was significant on Elliot’s Hendrick Chevrolet, the team opted to repair the primary car instead of pulling out a backup car. They did not return to the track.

Pole sitter for Sunday’s Auto Club 400 Kyle Larson joined the growing list of those to hit the wall this weekend. Minor right rear body damage hindered the No. 42 Target Chip Ganassi team’s final practice, but will not cause the team to switch to a backup car. Larson timed in fifth on the speed chart.

Kyle Busch again escaped major damage in the afternoon as his No. 18 M&M’s Toyota spun off turn two. He locked down the brakes and slid to a stop on the apron. Offered a tow, Busch declined and drover the Joe Gibbs racing machine back to the garage, where the team replaced the side skirts and front splitter. They opted not return to the track for practice.

In the final moments, Kyle’s brother Kurt Busch added his name to the list of those who earned the “California Wrinkle,” as he too scraped the wall with the right side of his No. 41 HAAS Automation Stewart-Haas Racing Ford. Luckily for Kurt, the damage was deemed repairable by the team.

Kurt Busch made slight contact with the wall in final practice. The 41 team will make repairs and re-wrap the right-side for tomorrow's race pic.twitter.com/FOj02lwOMp