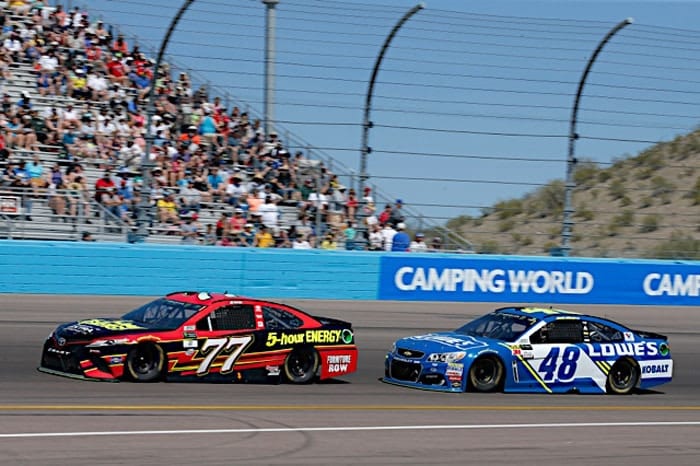 Rookie Erik Jones set the pace in the first of two Monster Energy NASCAR Cup Series practices on Saturday. The No. 77 Toyota Service Centers Toyota for Furniture Row Racing set a best lap right at the beginning of the session of 38.541 seconds (187.251 mph). Chase Elliott clocking the second fastest lap time of 38.535 seconds.

Cool temperatures greeted teams for their early bird special practice session for tomorrow’s Auto Club 400. That allowed Jones to turn a lap four-hundredths of a second faster than Kyle Larson‘s pole time from Friday afternoon. More grip at the drivers’ disposal gave teams concern as temperatures both in the air and on track are expected to be much higher during race time.

Drivers like Larson weren’t concerned with outright speed in the first session of the day as they set their sights on the afternoon practice to tell the tale of their cars for Sunday’s fifth event on the 2017 Cup Series schedule. Larson timed in 21st.

Last week’s winner at Phoenix, Ryan Newman, was third fastest in the morning practice, and his resurgence this season does not seem to be waning anytime soon. His 38.558 second lap shows promise leading into Cup Series final practice. Of not, he was one of the only drivers who actively worked in the bottom lane during morning practice.

It wasn’t all fun and games for some as Kyle Busch, Kevin Harvick and David Ragan all felt the wrath of Auto Club Speedway’s tricky surface.

Busch and Ricky Stenhouse Jr. each had a heart stopping moment in practice. Busch was first to play with the outer edge, as his No. 18 M&M’s Toyota for Joe Gibbs racing got loose off Turn 2, and nearly hit the outside SAFER barrier. Luckily no damage came from the incident. Busch managed to clock in the eighth fastest time with a 38.871 second lap.

Stenhouse Jr., did the same off Turn 4, but just barely nicked his right rear quarter panel off the outside wall. Luckily no major damage occurred and the team will not be forced to a backup car.

The same could not be said for both Harvick and Ragan. Their two Ford Fusions were both subject to damage in two separate on track incidents. Harvick’s team made the decision to repair its machine and began work immediately. Ragan’s No. 38 Camping World Fusion wasn’t so lucky, as a tire let go entering Turn 3. Front Row Motorsports will use a backup car in Sunday’s race.

The No. 48 Lowe’s Chevrolet for Hendrick Motorsports made the decision yesterday to miss qualifying after an on track incident caused major damage to the left side. Focusing on the race itself, Jimmie Johnson managed to take his backup machine to a fourth place time, with a 38.630 second trip around the two mile D-shaped oval.