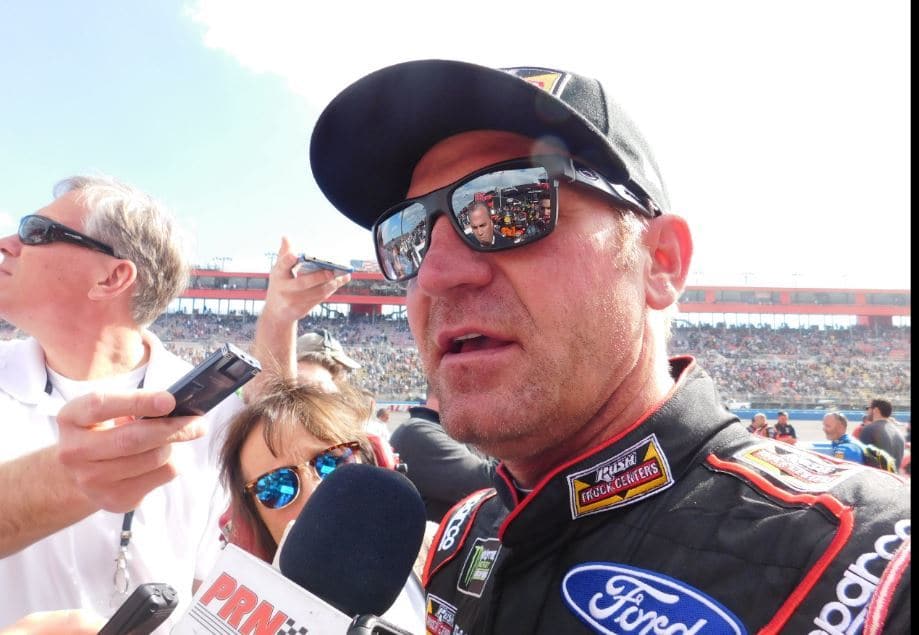 He got to the front on a pit call and stayed there for the long run.

Clint Bowyer and the No. 14 Stewart-Haas Racing team proved a thing or two in Sunday’s Auto Club 400 at Auto Club Speedway. Jumping into the top five early after a quick four-tire stop, Bowyer was able to contend in the top five for the remainder of the 202-lap race.

Surviving the chaos of an overtime finish, the 37-year-old held ground to finish third, his first top five at Auto Club since 2010 and first anywhere since 2015.

“I’m just having fun again,” Bowyer said. “That’s what it’s about. When you’ve got a team like this, it better be. I’ve been beat up pretty bad over the last year-and-a-half. To have a crew chief like Mike Bugarewicz, owners like Tony Stewart and Gene Haas. It’s a lot of fun again.”

The result comes at a good time for SHR, which has only earned one top-five finish through five races in 2017, that being Kurt Busch’s triumph in February’s Daytona 500.

“I appreciate everybody’s hard work at Stewart-Haas Racing,” Bowyer said. “Having these teammates and having this group behind you, it’s just amazing to be a part of at this point in my career.”

Following a struggling year with the now non-existent HScott Motorsports in 2016, it’s been tough to find a time this season where Bowyer wasn’t smiling. Earning three straight finishes of 13th or better leading into the 2-mile track, Bowyer gained some backbone after the fresh run.

“It’s a confidence thing right now, a momentum-builder,” he said. “We’re getting closer. I wanted to win that damn thing but to come home with the wild finish, well take it.”

Only managing a 17th-place run in qualifying, the No. 14 needed some improvements for Sunday, especially in the area of short-run speed. However, with a low amount of cautions in the first 180 laps, it worked out well for the Kansas native.

“We never showed speed in practice, but I wasn’t worried about it because I knew the car was really comfortable on the long run,” he said.

Crew chief Mike Bugarewicz felt a little different after final practice at Saturday, as he felt the team needed further changes to be near the front on Sunday.

“We didn’t feel like we had it in practice,” Bugarewicz said. “Our long-run speed was OK, but we were worried about the race.”

Turning it up when it counted, “Buga” was happy to bring home a good day for Bowyer and the entire team.

“It’s a great day for this team, this whole organization,” he said. “Our Ford was just awesome. Clint did a great job, we finally got to do a restart on the outside, which was big.”

Bugarewicz expressed the importance of a stable base early in the season, knowing how tough the times have been for Bowyer and the No. 14 crew.

“I think this whole team has been through a lot the past few years,” he said. “Tony has been through a lot, we’ve had a lot of different drivers. Getting some good finishes, getting up there in points, showing we can run with these top front-runners and be contenders. That’s what we’re out here for.”