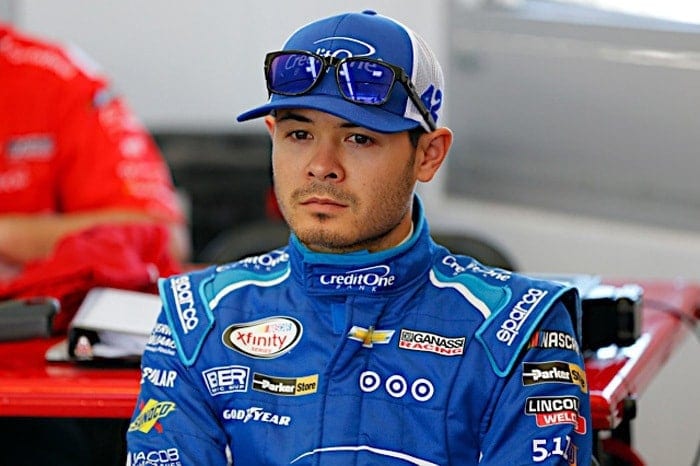 An exhale of relief was felt on the frontstretch following the Auto Club 400 at Auto Club Speedway on Sunday.

It was from Kyle Larson, who grabbed only his second career Monster Energy NASCAR Cup Series win after a streak of three consecutive second-place finishes in the 2017 Cup season. Leading 109 laps, Larson becomes the fourth driver to sweep the weekend after winning the XFINITY Series race on Saturday afternoon.

“It lots of fun to be Kyle Larson right now,” Larson said. “Our racecars are really fast in XFINITY and Cup. It’s a blast to show up at the racetrack every week. I had to battle [Martin Truex Jr.] and got by him. Pulled away a little and that’s when all the caution starting coming out.”

On paper, it would seem like an easy victory for the California native, as the 24-year-old won the pole and held the top spot for more than half the event. However, Martin Truex Jr. put up quite the fight across the 202 laps, as he led 73 laps and held more than an eight-second gap on the field at one point.

Looking light the man to beat, the plethora of late cautions hit the No. 78 hard, as he stayed out on a late pit stop and later fell to finish fourth.

“I thought we had as good a car as the No. 42 all day,” said Truex. “It really seemed like whoever got out front had an advantage. Sometimes you make the right calls, sometimes you don’t. It sucks when yo have to play defense in these things.”

You can bet Truex was the only disappointed man in the top five on Sunday.

Behind the No. 2 was Clint Bowyer, the highest feel-good performance of the day, in third. Bowyer earns his first top-five finish with Stewart-Haas Racing and first since August 2015 at Bristol.

“I was proud of the effort that the guys give me every week,” Bowyer said. “I wanted to win that damn thing, but to come home with the wild finish, we’ll take it.”

“It was up-and-down for sure,” Logano said. “I was able to drive up pretty quick in the top 10 and we stalled out around seventh.It was a battle, but this place is a lot of fun.”

The day wasn’t as smooth for everyone. Matt Kenseth suffered one of the hardest hits of the year when his No. 20 Joe Gibbs Racing Toyota was spun by Truex with 16 laps to go. Kenseth impacted the inside SAFER Barrier driver-side first on the backstretch, thankfully, escaping injury.

The accident was a help for his teammate Daniel Suarez, who got the free pass and ended up finishing seventh, his second straight top-10 result in his rookie season.

Another driver who benefited from the late chaos was Kevin Harvick, who overcame nose damage and a flat tire to finish 13th.

And the 23 does it again! Brings out a caution at the end just like Brian wanted. It must be part of his job description. Just a coincidence that the 24 got the free pass. I expected it earlier when the 48 was the first car one lap down. Oh well. The 48 got it at the last yellow. And the 83 did his part too, even closer to the end. The only one missing was the 32. He didn’t have to.

Tune in for the last 2 minutes and the first 200 laps don’t matter. Brian’s euphoric, if he can realize what’s happening.