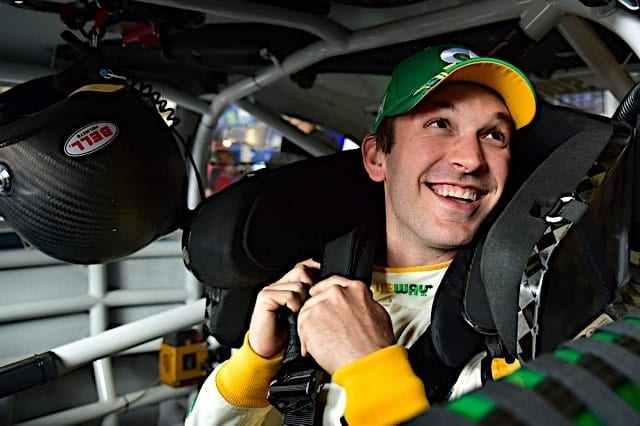 Daniel Suarez was a non-factor for most of the day at the Auto Club Speedway, but he made it count in the final stage of the race. The No. 19 Toyota went down a lap during the caution-free second stage of the race. But the rookie took the wave-around with just 20 laps to go in the race.

Then, a caution less than a lap after the restart allowed the No. 19 team to put on fresh tires, and another caution that took the race to overtime allowed them to get even fresher rubber for the two-lap shootout that ended the race.

This season has been full of races when one driver has dominated but couldn’t close the deal. Kevin Harvick at Atlanta and Kyle Busch at Phoenix both come to mind.

But on Sunday, the favorite actually won the race. Kyle Larson won the race from the pole after leading 110 laps, the second most laps he’s ever led in a single event. He wasn’t seriously challenged on the final restart and swept the weekend for the first ever time, after winning the NASCAR XFINITY Series race on Saturday.

Another major story line this season has been the youth movement. Larson, Chase Elliott and Ryan Blaney had been fast in the first four races, but Victory Lane was occupied by veteran drivers, such as Kurt Busch and Ryan Newman. Larson’s win on Sunday finally broke that mold.

As the series moves on from its western swing to the legendary Martinsville Speedway, the oldest track on the circuit, it’ll be fun to see if these young drivers will be able to keep up this momentum at such a historic venue.

Where… did the defending race winner end up?

Jimmie Johnson’s slow start to the season ended up continuing at his home race track. Johnson started the day off wrong by being involved in the first caution of the day when Brad Keselowski and he got together out of Turn 4. Johnson spent much of the day in the 20s, at one point going two laps down, finishing 21st on the lead lap after getting the free pass on the last caution.

“Man, we definitely didn’t have the fastest car out there today,” Johnson said after the race. “I think we used up all the good luck in the season finale last season. We battled all day long to get back on the lead lap, but we have got some work to do.”

If Johnson has had a slow start to the season, BK Racing is still at Daytona. Every week, both the Nos. 23 and 83 cause at least one caution each, and Sunday’s race was no exception to what seems like a new rule.

On Lap 180, Gray Gaulding found the wall in Turn 2, causing just the second non-stage ending caution of the day. Then, with just nine laps to go, Corey LaJoie spun out of Turn 2 as well. Earlier in the race, LaJoie also hit the wall in Turn 4 in an incident that didn’t cause a caution. Something has to start giving with this team.

There were two major incidents near the end of the race that will get a lot of press this week. Matt Kenseth restarted third on a Lap 185 restart and came down on Martin Truex Jr. for a bad wreck on the backstretch. Kenseth violently hit the inside wall but walked away from the hit partially due to the SAFER Barrier lining it.

Later, with just three laps to go, Roush Fenway Racing teammates Ricky Stenhouse Jr. and Trevor Bayne  collided going into Turn One and Stenhouse spun across the racetrack to cause the final caution of the day. Roush Fenway Racing had shown signs of life this season after a couple of seasons on life support, thanks in part to scaling down to just two race teams this season. It will be interesting to see if the team will be able to bounce back and either keep up the momentum or let this incident take the wind out of their sails.

Truex’s team screwed up. The No. 78 Toyota was the only car on the track that could keep pace with Larson all day long. But Cole Pearn’s decision not to pit with most of the front runners on the penultimate caution gave them no way to answer Larson, and they couldn’t do anything on the final two restarts with worn tires.

Another key to victory was clean air. NASCAR has worked and worked and worked on these cars to stop them from getting a big aerodynamic advantage out front, but nothing seems to be fixing the problem. It seemed to be worth a good tenth or two of a second on the track, which are big numbers for racecars. Whoever was in clean air out of Turn Two on the final restart was going to win the race unless they were on old tires.

How… big of a party is Clint Bowyer going to have back in Charlotte?

It has been a long, long time since Bowyer finished in the top five, and he can look back on his day and celebrate a good run. The last time Bowyer finished in the top five was at Bristol in 2015. Michael Waltrip was his car owner and Florida Man was relevant. The colorful driver from Kansas hasn’t had much reason to smile for the last year and a half.

After having trouble getting up to speed until the final part of the race the first few weeks, Bowyer spent most of the race in the top five, coming home third. Crew chief Mike Bugarewicz‘s call to pit on the second to last caution ended up being the right call, and the No. 14 team stands to be just as strong as both the Nos. 4 and 41 team after a couple of down years.

“I appreciate everybody’s hard work at Stewart-Haas Racing,” Bowyer told Frontstretch after the race. “Having these teammates and having this group behind you, it’s just amazing to be a part of at this point in my career.”