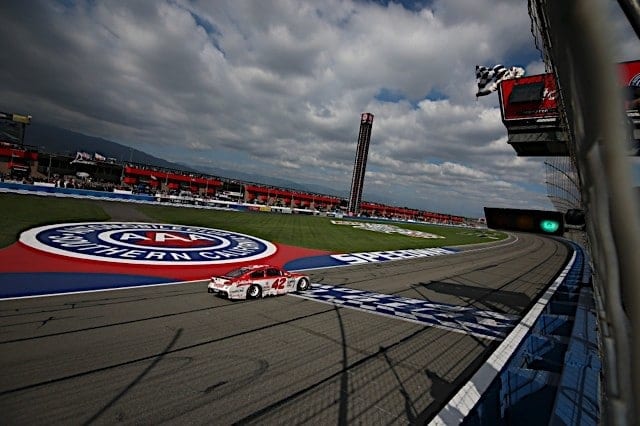 After three consecutive second-place finishes, Kyle Larson is a winner in 2017.  Larson’s victory at Auto Club Speedway, the second of his career, virtually guarantees him a spot in the playoffs and allows the No. 42 team to extend their championship lead.

The four straight top-two finishes are a sign that Larson is poised for a breakout season.  Yet the No. 42 team’s fast start might have greater implications for Chip Ganassi Racing.

While Larson has been leading the charge for the two-car organization, teammate Jamie McMurray is showing speed as well.  After a rough outing at Daytona International Speedway, McMurray has posted four finishes of 15th or better, including three top 10s.

McMurray was the one in the spotlight the last time Ganassi’s team showed this kind of strength.  That was back in 2010, when McMurray, newly reunited with the team after a stint at Roush-Fenway Racing, won the Daytona 500.  His victory in the Great American Race set off a season full of big moments for the No. 1 team, which included wins at Indianapolis and Charlotte Motor Speedways.

However, the problem that plagued McMurray in 2010 was the same one that would hamper the Ganassi organization for years.  The Nos. 1 and 42 teams constantly struggled to find consistent speed.  No matter what the team tried, its drivers were never able to regularly challenge for wins, which prevented them from seriously challenging NASCAR’s top organizations in the postseason.

McMurray’s 2010 may be the best example.  When everything went right for the No. 1 team, it was one of the cars to beat.  The trouble was that everything went wrong for McMurray much too frequently.  By the time he picked up his second win of the season at Indy, he also had amassed six finishes of 30th or worse.  Even more telling was that, of McMurray’s nine top 10s through the first 26 races, he placed in the top three six times.  As a result of that wild inconsistency, McMurray missed the Chase in 2010.

McMurray was not the only Ganassi driver to experience problems with speed and consistency in 2010.  Juan Pablo Montoya also visited Victory Lane that season, and picked up 13 top 10s during the regular season.  Montoya was coming off a 2009 campaign that saw him make the Chase, thanks to a late-summer rally.  Once in the postseason, Montoya reeled off four consecutive top five finishes, and suddenly the No. 42 team was in championship contention.  A crash at Charlotte the following week doomed Montoya’s title hopes, but the No. 42’s late season speed offered some momentum for 2010.

However, the momentum did not last.

By the time McMurray won at Indianapolis, Montoya had eight top 10s and seven DNFs.  The No. 42 team made another late-summer rally on the strength of its win at Watkins Glen International, but it was too little too late to reach the Chase again.

The organization went on a long descend after that.  Neither McMurray or Montoya finished in the top 20 in points for the next two years.  The 2012 season was particularly bad, with McMurray and Montoya collecting only five top 10s between them and zero top fives.

When McMurray drove to victory at Talladega in 2013, it snapped a three-year winless streak for the team.

Unfortunately for Ganassi, it took almost another three years until one of his cars won a points-paying race again, this time with Larson at Michigan International Speedway.  However, there were signs of improvement long before then.  Ganassi had bought out Theresa Earnhardt’s ownership stake in the team prior to 2014.  The organization also switched to Hendrick Motorsports horsepower.

McMurray won the All-Star Race in 2014, and made the Chase for the first time in 2015.  The addition of Larson had also pumped some new life into the No. 42 team, and his victory ensured that both he and McMurray would participate in the postseason in 2016.  However, one very bad day at Dover knocked both drivers out of the Chase at the conclusion of the first round.

So,after the first five races of 2017, are we watching a Larson hot streak or a CGR hot streak?  Certainly, Larson is off to a flashier start than McMurray, and it has still been a long time since the No. 1 team was number one on the track.  Yet it is hard to imagine that Larson could suddenly start being a weekly top five contender if his cars were not up to speed.

Aside from Montoya’s hot start to the Chase, Ganassi really has not put together a championship run since 2002, when Sterling Marlin spent the majority of the season leading the points.  Chip Ganassi Racing today is far-removed from the 2002 version.  Yet the team is also far-removed from its late-2000s troubles, when Ganassi had to merge his operation with the remnants of Dale Earnhardt Inc. just to keep the team afloat.  With the way the organization is performing now, even 2012 seems like long ago.

Even so, for CGR the season hinges on whether or not Larson and McMurray keep getting fast racecars.  If they do, Ganassi will probably put two cars in the playoffs again.  If they do not, it would not be a new story.