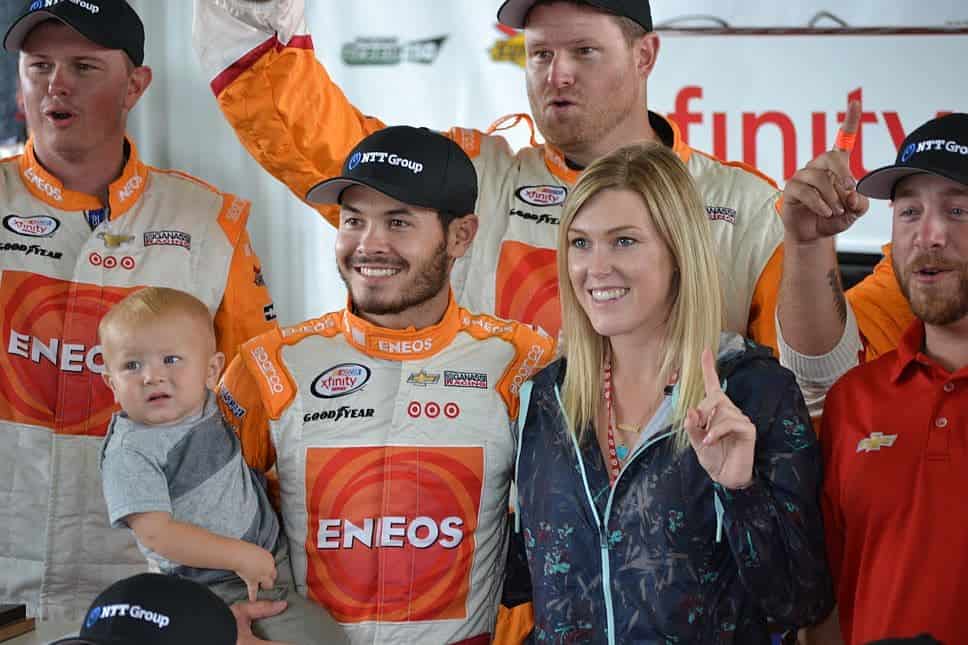 Native to California, Kyle Larson always steps up his game going back home to Auto Club Speedway. On Saturday, he paced the field for 20 circuits en route to his victory, the first time he’s ever won at the same track twice.

Late in the race Larson had fresher tires than Joey Logano, catching him with 20 laps to go. The No. 42 car worked over the No. 22 machine for eight laps before the California kid pulled ahead, as Brandon Jones hit the wall, causing the race’s final caution to display.

Larson’s Chip Ganassi Racing pit crew got the No. 42 car off pit road first, where he had to hold off Logano for the final handful of laps, picking up his first victory of 2017.

“The racing at the end with Joey [Logano] was awesome,” Larson told Fox Sports in Victory Lane. “I had a couple laps fresher tires than he did, and was able to chase him down. I wish that last caution hadn’t come out because it would have been a little easier for me to win, I think.”

Four of Larson’s six career XFINTY Series victories have come at tracks where there is multi-groove, tire wearing, up against the wall racing. Dating back to Pocono Raceway last June, Larson has been victorious in three of his last 13 starts in the preliminary series.

Auto Club Speedway puts on some of the best racing in NASCAR. There are up to four or five grooves that drivers can choose from at any given time, ultimately putting on a good show.

The restarts put on for a helluva show. Four, five, six wide at times, and the last restart was no exception. Though XFINITY Series regulars only led four of the 150 laps, three of which came under the caution flag, the series stars showed up on the final restart. Yes, Cup Series stars took positions 1-4 in the finishing order, but after that only one Cup Series driver was in the top 20, Ty Dillon in 10th.

The final restart saw the outside line move, which had series stars such as Darrell Wallace Jr. and Brennan Poole race from 10th and 12th, up to finish in sixth and eighth.

For Wallace, it marks his fourth consecutive sixth-place effort, dating back to Atlanta Motor Speedway, the second race of the season. The No. 6 car now sits fifth in the championship standings, 49 markers back of leader Elliott Sadler.

William Byron was the first XFINITY Series regular in the finishing order, coming home fifth. It marks the second consecutive top-five finish for the rookie driver.

Larson, Logano and Kyle Busch combined to lead 146 of the 150 laps. Outside of those three drivers, Byron, Jeremy Clements and Ray Black Jr. were the only other drivers to lead laps, totaling four laps out in front.

It would be one thing if the XFINITY Series regulars were close behind, but for much of the race the front three had four to five seconds on the field. The only shot XFINITY drivers had was on restarts, which is where Byron led his solo lap.

But what can NASCAR do?

The new aerodynamic package is making for better racing, but the Cup Series stars continue to dominate races. If last weekends race at Phoenix International Raceway hadn’t been a Dash 4 Cash event, it’s likely that one of the top-tier drivers in the Cup Series would have wound up in Victory Lane, and not Justin Allgaier.

But in a series where “names are made here,” drivers in 2017 aren’t being allowed to make a name.

In the span of 12 laps, there were two crashes that saw cars wind up in a ball of flames.

With 56 laps to go, Erik Jones made a crossover move on Paul Menard for the third position going down the frontstretch. This was an instance where crossover-gone-wrong came into play.

Jones hit Menard at an angle where the No. 2 car shot into the outside wall, ending Menard’s day. Menard had gained over 25 positions in a short span after he had received a penalty for too many men over the wall on a pit stop.

The next incident came with 44 laps to go, a handful of laps after the restart. Cole Custer, who had an average running position of 7.5 was hooked by Ryan Sieg going into Turn 3. The No. 00 car made impact with the wall head on, ending his day early.

“I think I hit him (Ryan Sieg) a tick just on my side draft going off of four and then he decided just to hook us going into turn one and wreck us,” Custer said.  “It is what it is, but we’ll just move on.”

Custer was running outside the top 10 at the moment of the crash due to a bad pit stop after Menard’s incident. Besides that, the No. 00 car was working on having a career-day.

Though he fell back to 11th as the checkered flag flew, Daniel Hemric was having himself quite the day. He started off the 300-mile event on the front row, qualifying second to Logano.

For much of the opening stage Hemric stayed among the leaders, finishing the stage in 10th after a caution flew with six laps to go. The No. 21 crew had an eventful pit stop, which made the rookie driver earn a bonus points, finishing 10th.

Hemric competed around the back half of the top 10 for the rest of the race, until he restarted inside the top five with less than 40 laps to go. The No. 21 team had just made a pit stop and wanted to save a set of tires in case of a late race caution. Falling back in the clutches of new tires, Hemric maintained to compete the rest of the race just outside the top 10. On the final restart, battling in-and-out of three-wide action, he came up one position short of recording his third top-10 finish in the opening five races.

Outside of Larson, Logano and Busch, Cup Series regulars didn’t have a say in much of the race. Erik Jones hoovered around the top five, never cracking the top two.

Dillon had a pair of sixth-place finishes in the first two stages, but fell to 10th in the finishing order. His RCR teammate, Menard was fast, but got wrecked, finishing 36th.

Timmy Hill was the only other double duty driver, and he was a non-factor, finishing 30th in the MBM Motorsports No. 13 Dodge.

“I vote for two races at Auto Club Speedway.  I’ll be the first to say that.  What an awesome race track.” – Joey Logano

“It was alright – just didn’t quite have the speed we needed there on the short runs to get where we needed to in order to have a shot to win.” – Kyle Busch

“Last week it was all my fault and I’ll take that all on me.  Today it was just a clown.” – Cole Custer

Logano’s right, Auto Club Speedway is an awesome track. Since NASCAR cut back to only one event at the 2-mile track, the racing has been superb, no matter the series.

It’s not a surprise that Larson wound up in Victory Lane, it’s one of his best tracks. Whenever there is little-to-no grip, the No. 42 car is always going to be a factor due to his dirt track experience.

Busch gave the field a head start on Saturday, qualifying 16th. It took him 30 laps to capture the lead, but then he was victorious in stage Nos. 1 and 2. The Las Vegas native has six career wins in the XFINITY Series at Auto Club Speedway. Though he hasn’t taken home a checkered flag since 2013, he has a runner-up, and a pair of third-place efforts.

If you rewind to 2005, Auto Club Speedway was also the site of Busch’s first career win in the Cup Series. He has a nag of running well at the track.

If Logano had won, it might have been one of the most impressive wins in recent memory. Sure, drivers can pass all over the wide track, but the No. 22 car passed over 60 cars on Saturday.

During the pit stop with a few laps to go in stage one, he was caught speeding in sections 2-9 on pit road. He raced to the lead within 60 laps.

On the caution that saw Menard get into the wall, the No. 22 car was stuck on the ground as the crew could not get a jack underneath. It bent some of the sheet metal along the sideskirts, but once Logano got on track, he was up to third by the next caution just a handful of laps later. That was impressive driving.

The XFINITY Series will have a week off before heading to the Lone Star State and tackle Texas Motor Speedway. In the fall, Larson was victorious, leading 30 laps. The defending winner of the spring event is Busch, who dominated, leading 75 percent of the race en route his eighth win at the track.