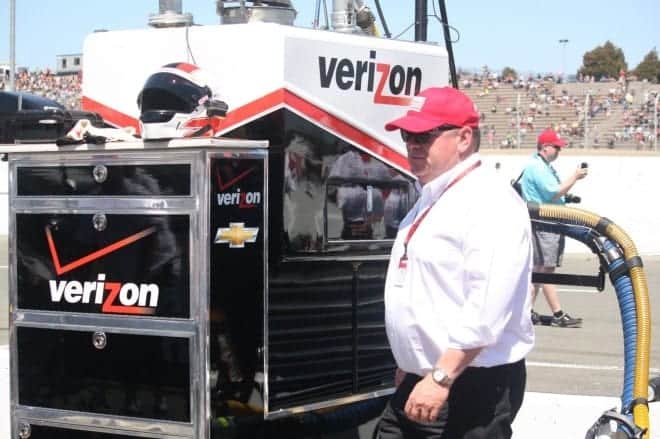 Chip Ganassi Racing has gone through both spurts of ultra-competitive greatness and the lulls of being a field filler. However, the organization as a whole has almost never looked better.

We’ve all heard plenty about Kyle Larson and the wondrous start he is off to in 2017. Larson came into this season having shown flashes of brilliance. Still, few saw a championship contender in the Target Chevrolet, not with just one career Cup victory to his name.

Now, Larson has a bulls-eye on his back in a figurative sense as well as a literal one. The No. 42 has qualified eighth or better in four out of the five events thus far. Add in four straight finishes of first or second and that’s elevated him into a title contender. The team is cranking out fast pit stops and Larson is no longer overdriving the car when victory is in sight.

But it’s not just Larson who came rocketing out of the gate as both CGR cars are performing at a high level. Is anyone aware Jamie McMurray has started in the top 10 in every race this year? Plus, McMurray has three top-10 finishes to go with those impressive qualifying efforts. It’s not just that the McDonald’s No. 1 team has finished well; they’ve run well, too. If not for the crash that ended his day at Daytona, McMurray might be hot on his teammate’s heels for the points lead.

It’s time to go short track racing this weekend at Martinsville Speedway. While sheet metal fabricators throughout the garage may cringe all week, most fans celebrate the trip to the half-mile, paperclip-shaped track in southern Virginia. Short track racing signifies a return to the roots of the sport.

All of the wind tunnel time in the world doesn’t amount to any advantage there. Every legend of the sport at one time battled the elements these small ovals provide, using hard-fought victories at the local level to work themselves up the stock car racing ladder. Often, the competitors themselves are equally excited to hit the track that reminds them of how they got here.

Of course, short tracks typically mean short tempers. Drivers jostling for every available inch are bound to get into each other at some point. Curb hops, wrinkled quarter panels, and smokescreen-generating spins are the norm. Given the fireworks we’ve seen already this year, chances are good Sunday may provide a little more extracurricular activity.

The Monster Energy NASCAR Cup Series tours nearly every part of the country during the 36-race schedule. With such varied locations comes a wide variety of local cuisine. But no track that the series visits has a menu item with as much fanfare as the famous Martinsville hot dog. Over the years, the dog has become available in several varieties to suit any taste. In 2017, the standard version comes heaped with cole slaw, onions and chili.

But why is this one so steeped in history?

Truth is, it’s always just been there. The hot dog has remained relatively unchanged for nearly the entire existence of the track. Other than a brand change two years ago, it’s still the same dog you would’ve eaten decades ago. And it’s still only two dollars.

Talk about a tasty tradition.

For the second consecutive year, a pair of rookies entered the Monster Energy NASCAR Cup Series battling high expectations. Erik Jones and Daniel Suarez each already hold a NASCAR touring series championship. Both drive chassis from one of the more dominant teams in recent memory, Joe Gibbs Racing. Yet both find themselves at the bottom end of the top 20 in points after five races.

For Jones, the year began on a sour note. The team has had trouble on more than one occasion getting through tech inspection. Clearing the gauntlet of officials late meant lost practice time, qualifying opportunity, and a lot of unnecessary stress.

Then, there was a crash at Daytona that started the team in a deep hole. Jones finished in the top 20 at Atlanta and Las Vegas, but the results were far from impressive. Things have warmed a a bit since then, as Jones gathered a career-best showing of eighth in Phoenix followed by a 12th at Auto Club Speedway.

Suarez had a similar beginning to his freshman year. Promoted to Cup with the unexpected retirement of Carl Edwards, Suarez immediately stepped in one of the top rides in the series.

However, like Jones, Suarez too was swept up in one of the many accidents at Daytona. Like Jones, Suarez recovered slowly with a pair of mid-pack runs. Then, once again like Jones, Suarez came to life at Phoenix. Back-to-back seventh-place runs have the 2016 XFINITY Series champion thinking he’s got a shot at the playoffs.

This duo may not have set the world on fire yet but don’t write off either of these future stars. They’re just getting warmed up for a long, successful future at the top.

FIVE: Next To Break The Slump?

Ryan Newman ending his long winless streak at Phoenix did so much to energize his Richard Childress Racing team. So who’s next to step out of their own run of shortcomings?

Clint Bowyer finished third at Auto Club Speedway Sunday. But it wasn’t just that he finished well. Bowyer was consistent, putting his No. 14 Stewart-Haas Racing Ford into contention throughout the day. He may not have led a lap yet in 2017 but for Bowyer, a top-5 finish was a welcome change.

Bowyer hadn’t finished in the top 5 on an intermediate track since 2013. It’s been four years of disappointing performances since but expect that all to change now. Stewart-Haas Racing is a championship-caliber ride and Bowyer is a proven winner. Few in the garage would be surprised to find him in Victory Lane fairly soon.

The next candidate to break a slump is Hendrick Motorsports’ Kasey Kahne. Kahne’s resurgence has been a highlight of what’s been a relatively slow start to the year for HMS. It’s been a few years since Kahne looked like a title prospect, missing the playoffs while watching teammates drive circles around him.

However, top-20 finishes in all five races thus far have the No. 5 Chevrolet looking like a solid playoff possibility. If Kahne can keep it going, building on this early-season momentum, he could easily punch his ticket with a trip to Victory Lane.