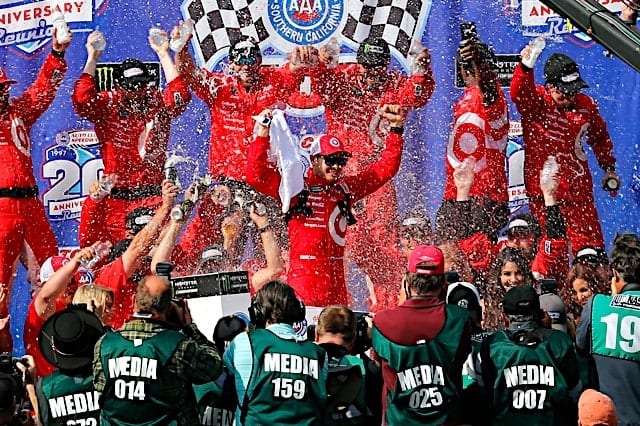 1. Kyle Larson: Will the Kid Keep It Going?

Kyle Larson is in a special place as a racecar driver. He can win every week.

We all know anything can happen on Sunday, but this guy was only a few close breaks away from having six consecutive wins in the Monster Energy NASCAR Cup Series.

After years of wondering when it would click for the highly anticipated dirt racer, 2017, so far, is looking to be his year. Will he continue that authority into Martinsville Speedway this weekend?

That would depend on what past race you’re watching.

If you’re watching the last six Martinsville races, you’ll bet this 500-lapper will be his first bump in the road since November. And if you’re a Sirius XM NASCAR Radio listener on Wednesday nights, you heard Larson call Martinsville one of his “toughest tracks” through his 116-race career.

And you can believe it, as he has finished 27th or worse in three of six Martinsville starts. Heck, two years ago, he didn’t even get to start the STP 500 after fainting that Sunday morning, sitting out the race with aid from fill-in driver Regan Smith.

But before you find your answer on this burning question, don’t forget his stellar run in this event last year. That day, which saw numerous long green-flag runs and a dominant performance by Kyle Busch, finally gave Larson a reason to like this short track, with a third-place result.

Momentum is a damn good thing in racing, and he has plenty of it in 2017, but it all must end eventually, right?

Yes! What a place to welcome the Camping World Truck Series back to the normal racing schedule.

After a sizable break that has become traditional for the series, it will race at Martinsville this weekend for the 37th time since its inception in 1995.

After the opening two races of 2017, who should we watch for Saturday’s Alpha Energy Solutions 250?

Well, if Larson is the Cup Series guy, Christopher Bell would be his Truck Series counterpart, as the fellow dirt dog already has a win this season last time out at Atlanta Motor Speedway and has nearly led half the laps turned in 2017 (105 of 230).

Furthermore, the 22-year-old has only two finishes worse than 11th since this weekend one year ago — that being a transmission issue at Texas Motor Speedway and a crash at Michigan International Speedway. So that’s 19 top 10s in 22 races. Wow.

Turning the focus to Martinsville, it’s hit-or-miss after only two starts. He grabbed a fourth last time out in the fall, but finished 19th in the spring, leading one to wonder how he’ll do for the third time out.

Bell isn’t the only mystery from the Kyle Busch Motorsports camp, as both Noah Gragson and Harrison Burton will be on my watch list. Burton, who is only 16 years old, made his series debut here last fall, finishing 22nd, while Gragson has never raced here in the Truck Series.

Though Burton will have his growing pains in his limited 2017 schedule for KBM, the pressure is on for Gragson, who follows in the highly successful footsteps of William Byron and Erik Jones in that full-time KBM equipment.

A reason Saturday will be a prime opportunity for him, or any series regular, to pounce toward the front is the lack of Cup drivers. Chase Elliott, in fact, is the only one who’ll compete on Saturday. And as history shows, this half-mile has always been a place to get those playoff points. In six of the last eight races, a series regular has scored the win, with experience usually rising to the top. Johnny Sauter has separated himself from the pack, winning three times and finishing outside the top 10 only once since 2012.

Another champion, Matt Crafton, has also proved valuable on the short tracks, leading 234 laps and winning twice since 2014.

But you can’t forget about the plethora of young guns; to name a few, Cody Coughlin, Austin Cindric, Chase Briscoe, Kaz Grala and Justin Haley. Watch for those restart zones, boys.

3. When Will the Hits Stop for Matt Kenseth?

One man’s meat is another man’s poison.

Matt Kenseth has started every race Larson has this season, but has taken a few more hits along the way. The last two weeks have been downright brutal for the Joe Gibbs Racing driver, who cut a tire and crushed the Turn 4 wall at Phoenix International Speedway and wrecked into the backstretch wall at Auto Club Speedway, leaving the 2003 champion catching his breath again.

It’s been the story of his 2017 season in a more literal on-track sense. Though he scored a third-place finish at round two in Atlanta, he had to overcome multiple pit road penalties to get there. Las Vegas Motor Speedway was a solid top 10, while the other three races have seen the Wisconsin driver score a single point in each one.

For the Kenseth fandom — heck, the Joe Gibbs Racing fandom out there — can Martinsville turn things around?

It just may. Martinsville has been one fun place for Kenseth, after all. Everyone goes back to the fall of 2015 when he unleashed hell payback-wise on Joey Logano, but when you admire his speed at the double-U-turn circuit, you may put him in your own watch list for Sunday.

With finishes of 38th, 15th and fourth in the last three races, there is literally zero you can take from those three numbers other than that he is improving. However, in the last eight races, Kenseth has led a sizable 568 laps at Martinsville, surprisingly leading to no victories. In fact, he has never nabbed a grandfather clock through 34 starts.

But he is there nearly every Martinsville race. And from what we’ve seen occur late in these Cup races this year, that may be enough.

4. Will the Winless Streak End for Chase Elliott?

It all started two years ago this weekend for Chase Elliott in the Monster Energy NASCAR Cup Series. That cool April day saw the then-19-year-old make his first Cup start, driving the No. 25 Chevrolet along side the regular four-car team at Hendrick Motorsports.

Despite much excitement in that NAPA car, the day turned really rough really fast, when he suffered major nose damage and spent more time behind the wall than on the lead lap. He finished 38th in his first of five Cup starts in 2015.

Though it didn’t go well, many knew it could be the start of something good. Now with two years in the books, a win is next for the Georgia native.

Can it come Sunday? The 21-year-old is as close to a first win as any other driver the last couple decades, but it hasn’t come to fruition.

Track history will show that Sunday may not be his day in the sun, as he has finished 20th and 12th in his last two starts. You could find a similarity between him and Larson, who also has struggled here. Elliott has growing confidence mixed with more experience coming into his second season.

Also, he will make another start in the Truck Series on Saturday. Last fall, he started from pole, led 109 of 200 laps before finishing second, one bump-and-run away from winning the race.

In what has become the future-of-now season with all the young drivers up front in contention for wins, Elliott continues to be on the heels of that win. He just needs to seal the deal.