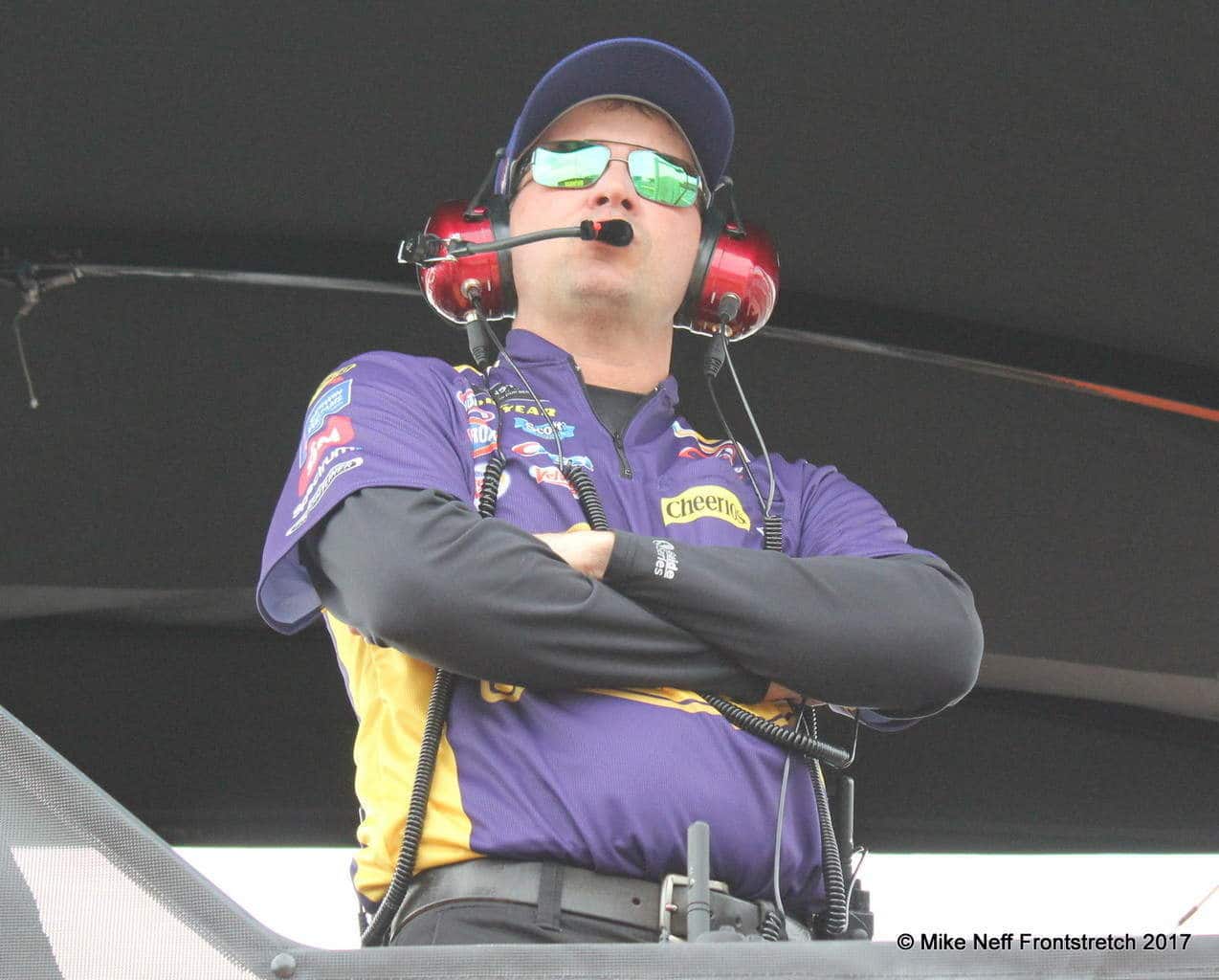 After the West Coast swing, the Cup series prepares to head to the one track left that was on the original schedule, Martinsville Speedway.

Chris Buescher’s crew chief Trent Owens, with his connection to Richard Petty, has a special affinity for the half-mile track in southern Virginia.

As the team pulls into Martinsville, there are many different things they have to be concerned about, from potential damage and tire abuse to brake heat. In Tech Talk, Owens touches base on the abuse the brakes take and the low air pressures that provide challenges to the teams. He also explains how side skirts are treated for the race weekend and how the car is utilized to help get drive off of the corner.

Mike Neff – The West Coast swing has come to an end, finishing at Auto Club Speedway, where you were able to race all over the track depending on what your car wanted to do. How did you feel about your day in Fontana?

Trent Owens – Our finish definitely didn’t reflect the way we ended our race. I thought we ended our race really well. We made some good changes throughout the race. We just started too far off and got some laps down.

We need to run better, we need to qualify better. California was our best qualifying effort yet. So things are moving in the right direction. We need to put our races together a little better and finish. It is definitely a different animal in California than what we are going to experience this weekend.

Neff – Southern Virginia is a very special place for you and your family. When you unload there, what is the first thing that you are going to be focused on?

Owens – We are going to unload in race trim and try to get our car the best we can and try and keep the drive off, because I think that is important. In the races I’ve been a part of so far, in the Cup Series, you definitely have to be good on the long run to have a good finish. We are going to concentrate on that.

We are going with a new driver, a new team, a new manufacturer, everything is new for me on that end. Our teammate AJ [Allmendinger] has a history of running really, really well up there. I feel like there is a good foundation at JTG to go to Martinsville. We’ll see what we’ve got when we unload, but our focus is definitely going to be in the race trim side of things, and we’ll see what we can do. I would like to get a top-20 finish at Martinsville; that would be really good for our team.

Neff – With the current rules and the new car, as tires build up pressure, the car gains a bit of distance between the splitter and the track on the straightaways. Is that something you focus on to try and get the weight to shift to the back of the car in order to get more drive off of the corner?

Owens – Now that we are in the fourth year of what we call our performance height rule, where we can put our frame height as we leave the garage right where we want it, it is more difficult to get the weight to transfer to the rear tires. It is one track where you will go less aggressive with front shocks. You have about nine pounds of air in the left rear tire, which isn’t a whole lot starting out.

You tend to get a little more body movement than some of your faster places. The reason for that is to try and get some of the weight on the back tires to create that drive off once they pick up the throttle. With the gear ratios that we have at Martinsville, it is really easy to spin the tires, so you have to have some kind of help from the car itself.

Neff – When you walk on the pit lane before the start of a race at Martinsville, the sideskirts on those cars are sitting on the ground. When you roll out of your stall to start the race, do you intentionally have them longer than they need to be to let them grind down to the optimal height through the first 100 laps?

Owens – You are exactly right. We run through practice and qualifying, and once we get through practice on Saturday we always build a new set of sideskirts before the race. When we build those we set them longer than what we had worn to during practice. When you leave pit road they are scraping the ground.

It isn’t a place where it upsets the car badly to drag a little bit. It is important to get those things sealed off to the ground. … Even the left front splitter, with the air pressure out of the tires will drag the ground until the right rear squats.

Neff – As slow as the speeds are at Martinsville, do aerodynamics still have a play in your performance?

Owens – It does; everywhere we go there is enough speed to generate some amount of downforce. Obviously the slower you go the less you are going to create. The advantages of more downforce over less is reduced at Martinsville, but we are in a sport where thousandths of an inch make a difference. Any little advantage you get you have to take advantage of. They are running fast enough at the end of the straights at Martinsville to generate downforce. If we can have more than the other guy, we have to do it.

Neff – As you run down pit lane at Martinsville there are only two openings in the wall. The first, last and four stalls on the sides of the openings are the only stalls with any real advantage. If you don’t get one of those six stalls, where do you decide you want to pit?

Owens – You have to weigh your options based on your practice speeds. You have to look at some of the cars you might outrun or might even outrun you. You try to align yourself so you don’t run into each other during the race. It is a real strategic pit stall selection.

If you don’t qualify 25th or better, things will just kind of fall into place. You have what you have. If you get to pick your stall you definitely have to weigh in who you are going to be racing around. You have to weigh drivers because some drivers on pit road are a little different than others as far as their habits are concerned. You try to stay out of their way. It is a difficult decision unless you get an opening, then it is obviously easy.

Neff – If you get caught in someone else’s mess or your own, to a point where you are damaged significantly, is it beneficial to have an stall near the entrance to pit lane where you can start working on it more quickly and able to roll rather than to limp all of the way to the Turn 1 end of the pits?

Owens – With our damage repair policy now, it calculates the time coming to your stall and exiting your stall. I don’t think now, this year, with the new rules, it is much of a disadvantage or advantage. In the past it was nicer to get in the stall, get the work done and try and beat the pace car out.

Now we have the five minutes, and some of that five minutes isn’t just in your stall. The time starts at the yellow line at the beginning of pit road. When you pull out of your stall it deducts time off of your five minutes as well when you leave pit road. You can argue to say stalls 30 through 40 might give you a better opportunity to avoid going a lap down. I could buy that, but that is probably the only advantage.

Neff – This is going to be the first track this season where tires aren’t really a big advantage. Is there going to be any consideration for tire wear and possibly short-pitting to gain an advantage of fresh tires over the competition?

Owens – So far I was hoping there would be a little more strategy played leading up to the end of segments. Martinsville is a place where, if you are in 15th or 20th place and the leaders stay out, I definitely think you come get tires and see if you can knock off a few of them and work your way into the top 10. Tires will be a big advantage if the cars in front of you have 40 or 50 laps on them. Obviously you’ll have to make a decision at the stage end whether you stay out or not. If the cautions fall right, you can certainly take advantage of four tires and maybe get some stage points.

Neff – The most important thing at Martinsville is brakes. We’ve seen a few teams have some brake issues at tracks where you really wouldn’t expect that to happen. Is there something going on this year where the brakes are taking more of a pounding?

Owens – We went forever and the brakes got really good. Now the manufacturers are starting to look at ways to lighten up their packages a little bit, since weight is so important these days. They may be getting closer to failing on safety factors.

At Martinsville we still run a good quality brake. I think temperature is our biggest concern over actual parts failure. Some of the other tracks where we saw brake issues, any time we take downforce off of these cars the driver is going to use more brake. Your straightaway speeds are going to be higher. When you take downforce off you lose drag. At some of these tracks we are running faster at the end of the straights than we did last year, but the mid-corner is slower so you have to use more brakes. I think that is where you are seeing some of the unknowns and potential failures.

Going into Martinsville, our biggest concern is generating too much heat. They have the stopping power so good now with the pads and rotors and combinations. In order to stop a car you have to have friction. When you increase friction you get a lot of heat. Trying to keep that heat out of the tire is a far bigger concern for us than failing parts.

When a team has to hope for a top 20, there is something wrong with the system. Somebody tell Brian again.