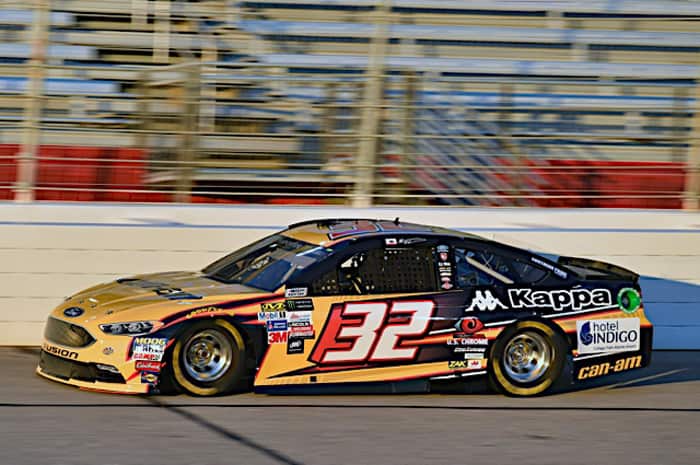 Think Small
A few teams in this group have shown improvement this season, but one of the smallest even among the other small teams has been impressive with nearly every turn of the wheel. Go FAS Racing has struggled through the last few seasons with a revolving door of drivers, leaving the track with runs in the mid-30’s many weeks, never seeming to be quite able to get ahead.
Until now.  The team has started off 2017 with a bang, scoring five top-30 finishes in six races, just one fewer than they did in all of last year.  If the progression of a small team is to step from running in the top 35 to the top 30 and so on, then this tam has taken a giant step forward.

Go FAS Racing named Matt DiBenedetto as the full-time driver this season, the first time they’ve had one driver in the car for an entire season.  Last weekend at Martinsville, DiBenedetto took time to chat about his team’s start to the year and to point out that what might not seem like a major accomplishment is really a big step in the right direction.

“It’s tough for some people to comprehend that or know how big of a deal it is for such a small team like us,” said DiBenedetto.  “We’re a team of 15 employees vs. teams that have four or five hundred employees. When we can be running top 30 so far every single race, already clicked off a top 10, and we’re still getting in out rhythm—the West Coast swing is hard—we’re still trying to get organized and get in our groove, but that’s been a big accomplishment.”

Part of DiBenedetto’s comfort with a new team stems from not coming alone.  “I have some familiar faces around who have worked with me before.  My crew chief, Gene (Nead), he came over with me.  My spotter, David Pepper, is still with me.  So there’s a lot of familiarity with me there.  It’s been really fun to come over here and work with everybody here because it’s such a good group of people that you want to help and prove and run good and do everything as good as you can for them.  Everyone here is just true racers.”

He’s quick to credit his team for their success so far. “The big thing is people.  It’s a team sport.  We couldn’t do without every single person here.  We just have really good people.  All of us; it’s been a really good deal.”

The driver deserves some credit as well.  DiBenedetto is the kind of driver that a small team is lucky to have: extremely talented, young, and personable. He brings some sponsorship along, too, backers that remained loyal to him when he left BK Racing at the end of last year.  They believe in him, the team believes in him.  DiBenedetto says that he looks at every lap as an opportunity to learn.

“Every season you come into, you feel a lot better, more confident. You keep learning.  I could be in the sport for 20 years and still be learning, so the more experience I have under my belt, the better.  I feel comfortable walking into the garage and driving these things, and that kind of slows everything down and makes it easier.”
We also talked about the challenges smaller teams face when NASCAR makes changes to the cars, as they did with the 2017 rules.  Not only is it expensive to change cars, but that’s the tip of the iceberg as far as making them race well.  The bigger teams come to the track better prepared simply because they have the resources to do that, DiBenedetto explains.  The small teams only have notes to fall back on, so when the cars are different, they’re behind the curve.
“It’s tough. We’re kind of in a tough situation no matter what, regardless of the rules package because we don’t have the simulation and the kind of support the big teams do, so we’re pretty much going into every race kind of guessing where our car needs to be, while the big teams have simulation and such and they’re fine-tuning right off the truck.  Then with an aero change being involved and the rules package being different, that’s just one more thing that’s different for us to try and make a guess at.”

That’s why it’s so impressive when a team like the No. 32 hits on something that makes them better across the board—they had to come by it on the track, on race weekend, while other teams already have it when they show up every week.  That’s why a top 30 is a big deal.

Every team goes to the track believing they’re capable of winning races.  Go FAS Racing is no different, but DiBenedetto is realistic about the team’s 2017 goals.  “If we’re being realistic, we want to be running in the top 30 every week.  I don’t want to be behind that.  But I would like to click off some top 25’s.  There are going to be weeks where financially with our budget and resources, that’s where we should run.  We’re overachieving by running in the top 30 every week.  But there will be weeks where we have breakout runs and we run better.  Certain tracks—Bristol comes to mind, maybe Martinsville or Richmond—are tracks that we can maybe perform a little better at, so I would shoot for top 25’s there, maybe even a top 20 here and there.  So I just focus on trying to have those breakout runs when we can.”

To one of NASCAR’s elite, a top 25 is a bad day.  For DiBenedetto, it represents a great one. But it’s also something to be proud of, because his team has to work twice as hard to get it…and little by little, they’re proving they can grow into a more competitive team.

Top of the Class: Martinsville I

AJ Allmendinger has Martinsville Speedway figured out pretty well—he finished second in the spring race last year, but this time around he acknowledged that he’d have a tough row to hoe when qualifying was cancelled Friday.  The field was set by owner points, meaning Allmendinger would start 30th, usually the kiss of death at a track where cars are lapped quickly and often. But in the closing laps of the race, there was Allmendinger, running inside the top 10 after patiently picking his way forward all day long to finish an impressive sixth.

Allmendinger’s JTG Daugherty Racing teammate, Chris Buescher started an even less-auspicious 33rd, but he too was inside the top 10 as the laps wound down, and while he was nipped at the end for the top 10, his 11th-place run was still something to write home about. Aric Almirola also had a solid 18th-place performance Sunday; his team seems to be back on track so far in 2017 after struggling last year.

Also worth mentioning in this group is Cole Whitt, who ran a gritty race for TriStar Motorsports, staying on the lead lap for most of the day and finishing 21st, an impressive result for his team once again.  All in all, it’s been a good start to the year for the No. 72 bunch, even though they have had a couple of hiccups.

Ty Dillon finished just one spot below Whitt, but misses the top category this week.  His run was decent, if not quite as impressive as Whitt’s simply because Dillon definitely has superior equipment to Whitt’s team. He did keep the No. 13 relatively clean, suffering minor damage in a multi-car stack-up, and outraced a few drivers with more money than his team has.

Front Row Motorsports had a good day as well, led by David Ragan, who always seems to get around Martinsville well, in 24th.  Teammate Landon Cassill reported a possible engine issue midrace, telling his crew that it wasn’t missing, but didn’t sound right.  Cassill soldiered to 27th.

Ryan Blaney had a great run going early, but looked like a pinball for a lot of the middle of the race, and had to hit pit road after some contact caused a tire rub, costing him a top finish and relegating him to 25th.  Blaney also incurred the wrath of Earnhardt Nation when he got into Dale Earnhardt, Jr. and turned him on the backstretch.  Earnhardt suffered minimal damage but joked that Blaney would not be getting any free beer this week.

Michael McDowell mixed it up all day and ended up 26th, relatively unscathed. The final team in this group, BK Racing might not have made the cut except they’ve struggled so hard this year that putting both cars in the top 30 (Corey Lajoie finished 28th and Gray Gaulding 29th) with no major incidents was a noteworthy accomplishment for the pair of youngsters.

Reed Sorenson had a decent enough day going for his Premium Motorsports team, hanging in the top 30 for much of the afternoon before going for a spin which left him to finish 31st.  This is a team that for the time being at least is having a good day if they grab a top 30, so Sorenson wasn’t terrible. Teammate Timmy Hill got bounced around a bit more and wound up 14 laps down in 33rd, having to be satisfied with finishing the day. Matt DiBenedetto suffered his worst finish of the year, but he raced better than his 35th-place result, running in the top 30 until suffering damage in a pair of incidents, the second of which ended his day 99 laps early. Jeffrey Earnhardt also suffered crash damage and was forced to pack it in early after running 385 laps, winding up 36th.

Tommy Baldwin Racing returns to the track this weekend at Texas.  J.J. Yeley will be behind the wheel of the No. 7 Accell Construction Chevrolet.

What could be #mowfun then 500 laps @MartinsvilleSwy in my @badboymowers car. Maybe catching bass but this is good also pic.twitter.com/PQ6BVKuTZz

Lap 422 the @GEICORacing @TeamChevy pits for removal of damaged LF fender. @tydillon said nothing affected the steering of the car. pic.twitter.com/dGf12bgpUa