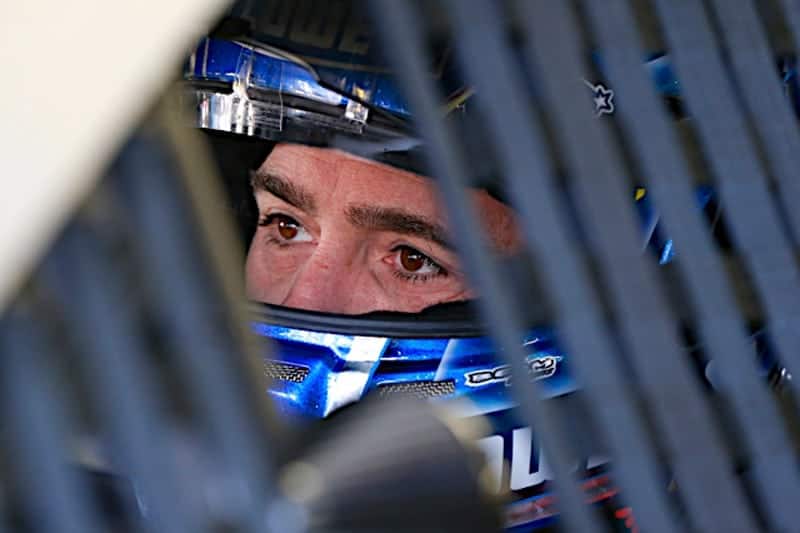 The seventh stop on the Monster Energy NASCAR Cup Series circuit comes Sunday in Fort Worth. The green flag rolls off after 1:30 p.m. ET at Texas Motor Speedway for the O’Reilly Auto Parts 500.

MENCS teams hit the track Friday at noon ET for practice and then 6:15 p.m. ET for Coors Light Pole Qualifying. Here are nine drivers to keep an eye on for your DraftKings lineup as the series wraps up its first stretch of 2017 (next week, they have Easter off).

The Texas Motor Speedway track surface has been repaved, creating an air of unpredictability for this weekend. The new track surface will bring higher speeds, a slicker line, and most likely fewer opportunities to pass. Past performance at Texas will not be as important as other tracks due to the unknown of how the track will run during its first laps.

Larson is still the series points leader following a 17th-place finish at Martinsville last weekend. He remains the hottest driver on the circuit, proven by his increased salary for this event. Chip Ganassi Racing should rebound well from their worst weekend of the season (Jamie McMurray was dead last at Martinsville).

Larson’s driving style is also perfect for repaves. He has thrived in the current low downforce package and should continue his solid early 2017 success.

Last season at Texas, Larson had finishes of 14th and 15th. In the spring race, he started 20th and picked up six positions. In the fall race, he started towards the front, but fell back to 15th. Larson has a career-best Texas finish of fifth.

Thus far in 2017, Larson is averaging just better than a second-place finish on intermediate tracks.

No driver is more disappointed that Texas decided to repave than Truex. Since moving to Furniture Row Racing in 2014, Truex’s worst finish at this track is 19th back in ‘14. Last season, this veteran had his best runs at the 1.5-mile tri-oval. He led 141 laps in the spring race, finishing sixth. In the fall, he led 66 laps en route to a third-place finish.

Martin has four straight top-10 results at Texas and was the series leader in laps led at intermediate tracks a season ago. The new layout could switch things up, but expect Truex to be an early favorite heading into this race weekend.

Kevin Harvick was nowhere to be seen last week at Martinsville. Harvick started ninth due to qualifying being rained out, then quickly fell back as the laps wore on. He ended the day in 20th, another uncharacteristically disappointing finish for the 2014 Cup Series champion.

TMS is a great place for Harvick to bounce back. He has five straight top-10 finishes here and eight in the last ten. In 2016, Harvick qualified poorly in the spring race, but worked his way to a 10th-place nod. In the fall, he ran a strong sixth.

Harvick also gets crew chief Rodney Childers back this week following his one-race suspension. Expect a much better overall performance from a team who needs to get back on track.

Johnson’s historic numbers at Texas make him a must-look this weekend. He is the all-time leader in wins, top fives, and top 10s. There is no better driver here than him. Regardless of how Johnson’s season has gone to this point, the seven-time Cup champion is a major factor when it comes to Texas.

Five of Jimmie’s six wins have come within the past ten races at this track. Over those past ten races, he is averaging just short of a fifth-place finish. That unreal recent success makes it surprising that his salary is shy of the $10k mark.

It all comes down to how Jimmie is running before Sunday. Practice times for Johnson may be more important than any other driver. If he is fast on Friday and Saturday, he will be a contender during the race.

Another driver who has similar numbers to Johnson but has not compiled as many wins is Kenseth. Kenseth has finished within the top five in nearly 50% of the races he has run at Texas. Although his two wins came back in 2002 and 2011, the 2003 Cup Series champion has run well here since.

Last season, Kenseth had finishes of 11th and seventh at Texas. If it weren’t for Johnson, Kenseth would lead all active drivers in multiple categories. Kenseth is second in top fives, top 10s, and laps led.

After a rough start to 2017, Kenseth bounced back at Martinsville last weekend where he finished ninth. Prior to that, he had a rough western swing with DNFs in two straight races. Joe Gibbs Racing is looking for a rebound weekend before Easter Break and remember, they were one of the best at intermediate ovals last year.

Hamlin had an average running position of 14th last weekend at Martinsville, but ended with a 30th-place tally. He wheel-hopped into the corner, causing a multi-car wreck with less than 100 laps to go. Unable to overcome the damage, the Virginian was held to a poor finish at one of his best overall tracks.

At Texas, Denny Hamlin should find his way back into the top 15. He is averaging a 12th-place finish over his career there, including four top-12s in his last five races. He has led laps in three of the last six and  finished ninth in the fall after starting 17th. The No. 11 team needs a pick-me-up and Texas should be the place.

Busch and the No. 41 Stewart-Haas Racing team has had a run of bad races lately. Since winning the Daytona 500 and then finishing seventh at Atlanta, Kurt has results of 30th, 25th, 24th, and 37th. This has caused Busch’s DraftKings salary dropping to a point where it’s too appealing to ignore.

Even though he has been on a bad streak, Kurt is in the same equipment as Harvick and the resurging Clint Bowyer. He has to find his groove again some time soon.

Busch is averaging a 15.5 finish at Texas over 28 races. At $8,000, a 15th-place result would be OK. He has three top 10s in his last five Texas starts and has not finished outside the top 20 since 2014. While he may not contend for the win, a respectable finish would be enough for the back end of your DraftKings lineup.

Jones is still extremely cheap for how well he has run this season. He has five straight top-15s and ranks 13th in the MENCS standings. Jones should be rostered every week until his salary starts to respect how well he is driving.

Jones has one career start at Texas. While filling in for Kenseth in 2015, Jones qualified sixth and finished 12th. With more experience under his belt, this rookie could have an even better day on Sunday.

It may be time to hop back on the Bayne train. The Roush Fenway Racing driver ended the day at Martinsville with an impressive 13th-place performance. He ran in the top 15 consistently and avoided confrontation.

Bayne has been a pleasant daily fantasy NASCAR surprise so far in 2017. He has four top 15s in six races, finishing with positive position differential in all six. If Bayne qualifies outside the top 20, giving him room to move up the No. 6 Ford driver would be a strong start.