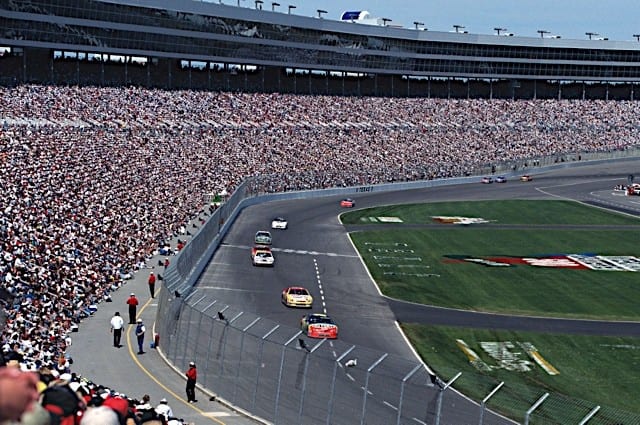 As the circuit travels to the Fort Worth track this weekend, here is a look back at the inaugural Texas race in 1997.

The Jim Carrey movie Liar Liar topped the box office charts that weekend and “Can’t Nobody Hold Me Down” by Sean Combs, then known as Puff Daddy, featuring Mase, was No. 1 on the Billboard Hot 100.

CBS broadcasted the race, which was known as the Interstate Batteries 500, and the legendary commentating team of Ken Squier, Ned Jarrett and Buddy Baker called the race.

Burton won the race driving a Ford Thunderbird, the final year the car was used in MENCS, as Ford switched to the Taurus the following season.

The Virginian also won in an Exide Batteries car, essentially spoiling the event for race sponsor Interstate Batteries, which was the primary sponsor for the No. 18 of Bobby Labonte at the time.

The weather was clear on race day, but heavy rain poured down on the track grounds in the days leading up, canceling qualifying and flooding many of the speedway’s parking lots. Highway 170 was closed down by the Texas Department of Transportation to be used as a parking lot.

Points leader Dale Jarrett sat on pole due to canceled qualifying. Fifty-two cars attempted the race, with only 43 making it in. Put in perspective, 40 cars are on the entry list for this weekend’s race.

Bobby Labonte, his brother Terry Labonte, and Bobby Hillin Jr. were the only drivers in the starting lineup from the state of Texas. When the Cup Series takes the green flag on Sunday, Chris Buescher will be the only driver in the field from Texas.

The first turn of the first lap featured a 13-car pileup when Darrell Waltrip turned down on Johnny Benson. Waltrip finished last in the race and did not complete a single lap.

Jeff Gordon, who went on to win the 1997 MENCS championship, finished 30th, while future Hall of Famers Rusty Wallace and Mark Martin failing to finish.

Wallace spun out from getting loose and collected eight cars at the finish line.

“The track is so difficult to drive,” Wallace said after the wreck. “I really believe they’ll have to do a total reconstruction to get it right.”

This race occurred prior to the rule change that freezes the field when the caution comes out and before the free pass rule to the first guy one lap down. Drivers raced back to the finish line before they would slow down for the caution and lapped down cars would battle to get ahead of the leader to get their lap back.

Ernie Irvan was trying to get his lap back from race leader Terry Labonte after Wallace’s wreck brought out the caution. Greg Sacks had slowed down for the wreck and Irvan plowed into the back of him to further cause mayhem, collecting Gordon in the carnage.

That incident would never have occurred in today’s NASCAR.

It appeared as if Terry Labonte was going to run away with the race, leading a race-high 104 laps, but gave up the lead with 83 laps to go to Ricky Rudd.

A different pit strategy put Labonte and Rudd behind Todd Bodine and Burton.

Burton took the air off of Bodine’s bumper to get him loose in Turn 1 on lap 277. Followed by a slight nudge, depending on which party you asked, Bodine went spinning into the fence, yielding the lead to Burton, who never looked back for the final 58 laps.

The first-time winner did not do a burnout or a Polish Victory Lap. He simply ran his cool down lap with the rest of the field and then pulled it into Victory Lane.

I wonder if Brian uses Sprint service? Maybe Sprint can get some of their money back that way.

MENCS sounds like some kind of behavior disorder. It’s cute how the writers use the latest sponsor and abbreviations as if they get paid for using “proper” terminology.

It sounds like it could explain Brian’s actions, as if there could be a possible explanation.