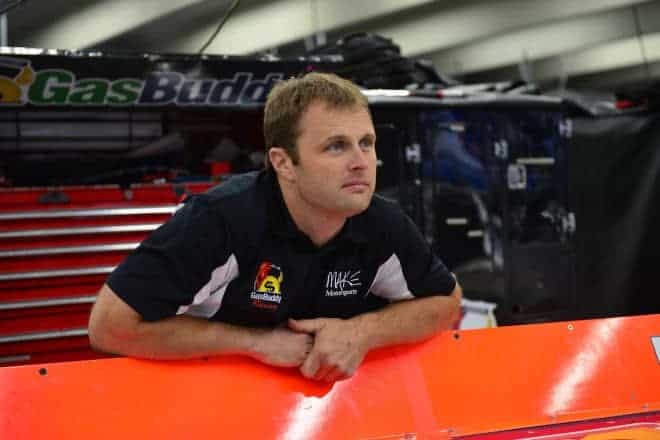 Growing up in frigid Wisconsin, Travis Kvapil had a dream of one day making it to NASCAR, though he didn’t think it would ever be achievable. Entering his 17th year in the sport,  the 41-year-old is happy running back down the ranks he once ran up.

Beaver Motorsports announced in mid-February that Kvapil would pilot its No. 50 truck for the 2017 season. Though there was no specific number of races, it looks at though he will pilot the machine for the majority of the schedule.

Just like with almost all drivers, it comes down to money. Beaver Motorsports has less than a handful of full-time employees that work on the trucks bringing them to the 23 races.

But getting sponsorship for a driver that has been around the sport for almost two decades, might not be as easy as one would think and quite possibly has hindered Kvapil’s career.

“I’ve talked to several of the front running teams in the Truck Series and that’s their M-O,” Kvapil told Frontstretch. “They are looking for drivers that can bring funding and support it. At the end of the day the reality is, I bet there are less than a handful of true paid drivers in the Truck Series. I’m not saying that’s wrong, it’s kind of the way the sport has turned in the last handful of years and the direction its going.”

Since competing in 16 races for Go Fas Racing in 2014, Kvapil has formed a close-tied relationship with Keen Parts and Corvetteparts.net. The partnership made its wa to the XFINITY Series in 2016, when B.J. McLeod hired Kvapil to compete in eight races, finishing a season-best 20th at Bristol Motor Speedway last August.

The alliance between the two sides has even carried over to Kvapil’s two sons, Carson and Caden, as they are competing in a number of different series trying to make it up the ranks.

But that lone sponsor is not capable of providing the income for Kvapil to run in a full season, in any series.

“I could definitely spend more effort and more energy in trying to find sponsorship, but I’m 41 years old and I’ve changed my desires in life and what I want to do,” Kvapil said. “I would rather go to my shop and work on my kid’s race cars than be on the phone all day beating my head against the wall trying to find $50-75,000 dollars a week to go drive a truck. That’s just where I’m at in life and I’m happy with my career and what I’ve accomplished.”

Having no regrets, Kvapil has never had the opportunity compete in the Cup Series with one of the big organizations. In the one full season he raced for Roush-Fenway Racing in the Truck Series, he recorded a career-high four victories.

Since winning the 2003 Truck Series title, and having a career-year in 2007, Kvapil has raced for many teams in a similar situation as Beaver Motorsports. From the start of the 2008 season onward, the former champion has competed in partial schedules for Rick Ware Racing, Randy Moss Motorsports, RAB Racing, RSS Racing, Athenian Motorsports, Premium Motorsports and most recently MAKE Motorsports.

In order to expand, sponsorship is key.

“I would love to drive some trucks or some XFINITY cars or whatever that was capable of really being competitive and running in the top 10,” he said. “It seems the only way to have that opportunity is to bring sponsorship money with you and basically buy the ride for the race or for a series of races. I tell people all the time, I driver racecars to get paid. I don’t pay to drive racecars.

“I would love to take a sponsor or two to one of these teams and try to build something out of it and have some success in the future. I love driving. It’s still in my blood. I really have a desire to go out and compete. To take some of the smaller teams with lesser funding and try to help improve their team or show them areas to improve on with my experience, I do enjoy it. ”

In each of the last two years Kvapil has finished 16th in the Truck Series point standings.

After finishing 24th at Daytona, being replaced by Akinori Ogata at Atlanta Motor Speedway and finishing 29th at Martinsville Speedway, Kvapil currently sits 25th in the series standings. Despite his veteran leadership he brings to Beaver Motorsports, there is not a certain amount of races that are set-in-stone for his 2017 schedule, though he does expect to be at Kansas Speedway, the next race.

“They are working really hard to find some partners and sponsors to come on board and elevate that team to the next level,” Kvapil said of Beaver Motorsports. “I think they are really close to putting some things together, and once we are able to buy some better tucks or hire some more people and more competitive engines, I’m definitely all about going out there and driving for them and doing a good job.”

Like every other year, the beginning of the Truck Series schedule is spaced out. There are only four races spanning from Daytona (February 24) to Kansas (May 12). That means there is close to three months for the team to make calls and look for sponsorship to hop on board and help fund the organization.

The relationship with Kvapil and Mark Beaver, owner of Beaver Motorsports, dates back to 2014. In 2015, he competed in 21 events for MAKE Motorsports, co-owned by Beaver and Tracy Lowe.

“He’s relied on my experience and knowledge of the sport,” Kvapil said of Beaver. “He’s given me an opportunity to stay on the track. To be honest, there has been times where I’ve had nothing else to do– there was no other opportunities.  There are times where we get really frustrated with each other and I tell him areas that we need to improve in. The reality is without the sponsorship or funding to do it, he’s just trying to stay in business and go to the rack track the next week.”

As well as competing for Beaver Motorsports in 2017, Kvapil is likely to be racing for B.J. McLeod Motorsports in the XFINITY Series for at least a few races.

Prior to the season, McLeod had spoken to Kvapil telling him to keep the door open.

“I really admire and respect B.J.,” he said. “He was a young kid that had a vision and a dream to build an XFINITY deal. He owns his own team and is in control of his own situation and destiny. Hopefully, there will be some opportunities and it looks like there will be at times.”