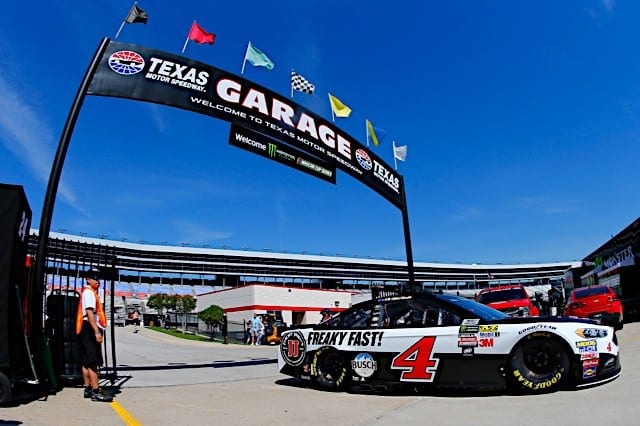 Sweeping all three rounds, it was a perfect qualifying day for Kevin Harvick.

Especially the final session, where Harvick ripped around the 1.5-mile Texas track in 27.217 seconds [198.405 mph] to win the pole for Sunday’s O’Reilly Auto Parts 500. It is the 19th pole of his Monster Energy NASCAR Cup career, first at Texas and second of 2017.

“It’s been a stressful day,” Harvick said of the wreck-filled Friday afternoon in Texas. “Coming and breaking in a new track and the going out and running as fast as we had to run. I have to thank the XFINITY guys for letting me run. I was able to apply a lot from there.”

Lining up second, Ryan Blaney earned his third top-three start in 2017. The Wood Brothers Racing driver was only 0.053 seconds in rears of Harvick.

“[Turns] 3 and 4, I got a little tight over there,” Blaney said. “I should have raised the trackbar on the backstretch. We got better each round which is always encouraging. This year, we’ve gotten better round-to-round.”

Clint Bowyer starts third after tying Blaney’s lap of 27.270. The result ties Bowyer’s best qualifying effort since Watkins Glen in 2013. In a happy mood, Bowyer was still disappointed to miss out on the shotgun given out to the Texas pole-sitter.

“That butthead [Harvick] is up there getting a shotgun, smiling,” Bowyer joked. “I’m smiling, too. That’s a good day for all of us. Thanks to Haas and everyone at Ford again for the opportunity.”

The session didn’t even begin for nine teams, who were unable to make it through pre-qualifying inspection. Among these teams, Kyle Larson, Chase Elliott, Kyle Busch and Dale Earnhardt Jr.

Jimmie Johnson was able to make a lap, however, spinning in Turn 1 to end his day early. He will start 23rd.

With the lack of quick teams on track, it opened he opportunity for some of the series’ small teams.

Corey Lajoie cracked the top 24 in his No. 83 BK Racing Toyota, lining up 23rd for Sunday. Michael McDowell, who finished second in opening practice, starts 13th followed by Ty Dillon and Landon Cassill in the top 15.

“A really great effort,” McDowell said. “We’re a little disappointed, really fast in practice and we just missed it there.”

you guys keep saying harvick won a shotgun winning the pole, IT IS NOT A SHOTGUN. it’s a lever action rifle.

I wonder if Kyle Busch threw a temper tantrum with his crew chief over the inspection issues.

What I like is the first five are Fords, and eight Fords in the top-12!

Brian will do something about that if he wants to keep Reverend Joe and Mr. H happy.