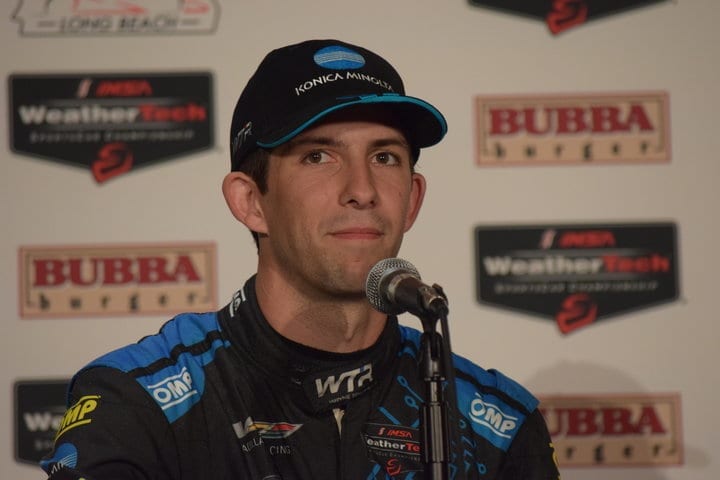 Despite everything that IMSA officials have done over the past couple of months to slow the Cadillac DPi-V.R.’s, the Cadillacs just keep charging.  Friday in Long Beach was just one more example of that as Ricky Taylor blitzed the field to claim the overall pole for Sunday’s BUBBA Burger Sports Car Grand Prix at Long Beach.  Taylor’s lap of 73.549 seconds (96.328 mph) was nearly 1.2 seconds faster than the previous IMSA track record at Long Beach, which Taylor himself set two years ago.

Afterwards, Taylor admitted to being a bit worried about racing an LMP2-based car on a street course.

“This is the first year with the Cadillac,” Taylor said during the post-qualifying press conference.  “We’ve heard horror stories about the P2 cars on street courses last year, and in my head I was working up how horrible is was going to be. But the car has been unbelievable, especially with the first 36 hours we’ve had. The car handles so well, you feel the bumps because it’s so stiff, certainly, but it drives where you want it to.”

Taylor’s lap was two-tenths of a second faster than Action Express Racing’s Christian Fittipaldi in second.  Mazda’s Tristan Nunez put the red No. 55 Mazda RT24-P third on the grid. Mikhail Goikhberg was fourth quickest, while Eric Curran rounded out the top five.

In GT Le Mans, it was once again extremely close.  Unfortunately, the fastest car in practice could not take part in the session.  In the closing minutes of the 20 minute pre-qualifying warm-up, Patrick Pilet crashed the No. 911 Porsche exiting turn 9, breaking the left rear suspension in the process.

With Pilet unable to take part, the session was a complete toss-up. Corvette Racing’s two C7.R’s put themselves at the top of the order quickly with Oliver Gavin on top.  Porsche GT Team’s Laurens Vanthoor topped the Corvettes briefly before Jan Magnussen put himself at the top of the charts.on an

From there, Magnussen slowly and methodically lowered the target time down into the 76-second bracket.  Risi Competizione’s Toni Vilander had a legitimate chance to snatch the pole away, but he lost control entering turn 9 and spun into the tires.  Luckily, the Ferrari 488 GTE suffered minimal damage in the incident.

The session was cut short with three minutes remaining when Ford Chip Ganassi Racing’s Richard Westbrook went wide exiting turn 5 and clipped the tire barrier.  The contact broke the rear wing off of the No. 67 Ford GT and put debris on track. The red flag was displayed and by rule, Westbrook lost his best lap.  He’ll start eighth in class.

As a result, Magnussen claimed the class pole with a lap of 76.909 seconds (92.119 mph), a new track record for the GTLM class.  Joey Hand qualified the No. 66 Ford second, less than a tenth of a second back. However, he had already gone purple (fastest of all) in the first sector on new lap right before the red flag was displayed.

Vilander’s best lap prior to his crash was good enough for third, four-hundredths of a second behind Hand.  Since his incident did not cause a red flag, Vilander will keep the third starting spot.  Vanthoor was fourth fastest, followed by BMW Team RLL’s Bill Auberlen.  The eight GTLM entries that qualified were separated by less than six-tenths of a second.

In GT Daytona, a number of different cars were right up there in the hunt.  Alegra Motorsports, who only earned an entry in the race after Dream Racing withdrew, was right in the hunt with Daniel Morad driving.  Bryan Sellers, who is splitting time between two different GT3 cars was there as well, along with 3GT Racing’s Jack Hawksworth were right there in the hunt as well.

The three drivers traded fast laps throughout the session.  Finally, on his tenth lap, Sellers turned in a lap of 79.243 seconds (89.406 mph) in his Lamborghini Huracan GT3.  That lap held up through a number of assaults to give Sellers the GTD pole.

Sellers’ lap was only three-hundredths of a second faster than Hawksworth in the No. 15 Lexus.  Morad was third quickest, another tenth of a second back.  Change Racing’s Jeroen Mul was four-thousandths of a second slower than Morad in fourth.  Stevenson Motorsports’ Lawson Aschenbach was fifth.

3GT Racing’s No. 14 Lexus for Scott Pruett and Sage Karam did not set a time after Pruett crashed the car in opening practice Friday morning.  The team had to make extensive repairs to the car, including pulling the engine out at one point.  The team plans on starting the race on Saturday from the rear of the field.

Coverage of the BUBBA Burger Sports Car Grand Prix at Long Beach is scheduled for 4 p.m. EDT on Saturday.  The race will air live on FOX.

They should give the caddy a 35 litre fuel tank or mandatory stop/driver change every half hour. Or make it race on rear tires off a randomly picked taxicab. Or take all the aero off it. Or make them use a straw to fuel up with. They’d probably still win after all the other dipicars break.

Getting pretty lame watching these DiPi cars. At least Mazda is sort of showing some sign of life. Pretty sad first year for this class.