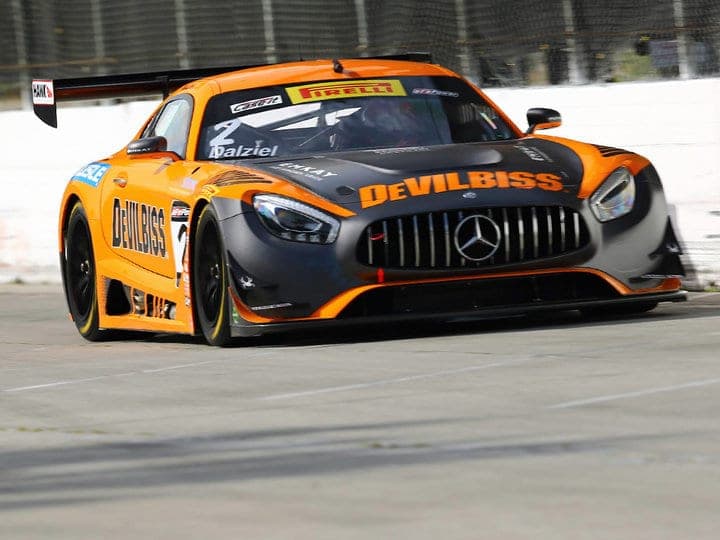 Long Beach is the only place on the Pirelli World Challenge schedule where the teams can actually put themselves directly up against the IMSA WeatherTech SportsCar Championship’s GT Daytona class and see where they stand.  Both classes race GT3 cars.  The main difference here is the tires.  GT Daytona cars run on Continentals while Pirelli World Challenge teams run on Pirellis.  So far, the Pirellis appear to be faster.

Ryan Dalziel is splitting time this weekend between his Nissan DPi for Tequila Patron ESM and a Mercedes-AMG GT3 for CRP Racing in Pirelli World Challenge.  After practicing well in the Nissan, Dalziel went out and turned in a lap of 78.994 seconds (89.715 mph) around the tight street circuit.

This lap was a quarter of a second faster than anything put up by a GT Daytona car on Friday.  It was also a tenth and a half quicker than Wright Motorsports’ Patrick Long in second.  K-PAX Racing’s Alvaro Parente was third quickest, just two-thousandths of a second slower than Long in his McLaren 650S GT3.

Parente’s teammate Bryan Sellers, who is also doing double-duty this weekend, was fourth fastest in the No. 6 McLaren.  Cadillac’s Johnny O’Connell was fifth fastest.

In GTA, a change ahead of Long Beach has opened the class up a bit.  Based on his performances at St. Petersburg, WC Vision officials chose to elevate GMG Racing’s Alec Udell up to the GT class.  As a result, the GTA cars are a bit lower down the order.

Towards the end of the session, GMG Racing owner/driver James Sofronas turned in a lap of 80.103 seconds (88.473 mph) to top the class.  The lap was good enough for 13th overall.

Sofronas’ lap was half a tenth of a second faster than Wright Motorsports’ Michael Schein in a similar Porsche 911 GT3 R.  K-PAX Racing’s Mike Hedlund was third quickest, followed by Absolute Racing’s Yufeng Luo in a Bentley.  Pablo Perez Companc in the Champ 1 Mercedes was fifth in class.

Unlike the IMSA WeatherTech SportsCar Championship sessions, Pirelli World Challenge practice was clean.  No crashes and no red flags.  Teams have a brief 20 minute practice session at 8:45 a.m. PDT Saturday morning before qualifying.