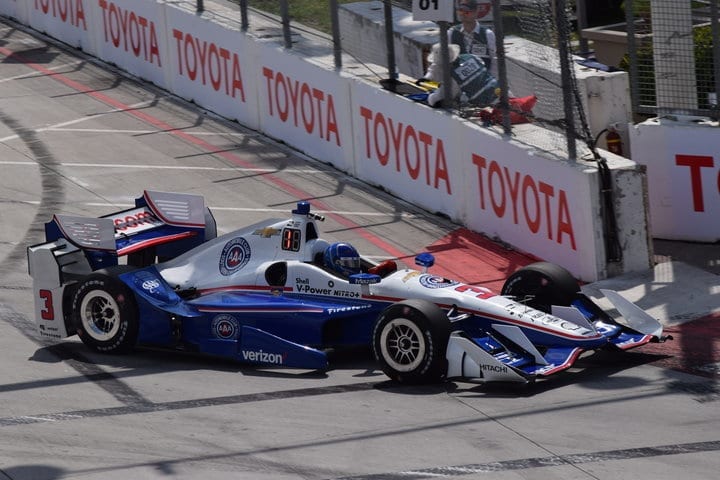 Afterwards, Castroneves was very pleased with his performance.

“[The] car felt pretty good,” Castroneves said during the Firestone Fast Six press conference.  “Especially with the reds, my car came alive from this morning. So the AAA Chevy is working really hard. Also Chevy in particular. We noticed that our competitors, Honda, are strong. To put a lap out there together, now we got to think about tomorrow.”

The session was not all easy going for Castroneves.  During round No. 1, Castroneves had a issues with teammate Simon Pagenaud.  Pagenaud was judged to have impeded Castroneves and penalized his best two laps by INDYCAR officials.  As a result, Pagenaud will start 21st (last) in Sunday’s race.

Castroneves’ lap was nearly two-tenths of a second faster than Chip Ganassi Racing’s Scott Dixon in second.  This is in stark contrast to round No. 2, where Dixon was fastest by all of three-ten thousandths of a second.

The 43rd Annual Toyota Grand Prix of Long Beach is scheduled to get underway at 4:30 p.m. EDT on Sunday.  The race will air live on NBCSN.