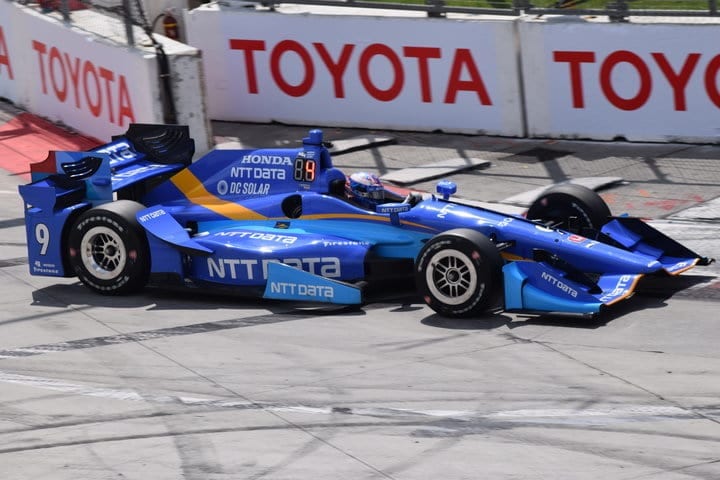 Scott Dixon continued his great form on Saturday, turning in the best lap of the 45-minute final practice session of the weekend.  However, Dixon topped the charts by the smallest of margins.

Dixon’s lap of 67.1348 seconds (105.531 mph) on his final lap of the session was only two-ten thousandths (you read that right) quicker than Andretti Autosport’s Ryan Hunter-Reay.  Team Penske’s Simon Pagenaud was third fastest, three-hundredths of a second further back.

There was one quick red flag during the session.  Dale Coyne Racing’s Sébastien Bourdais slid nose-first into the tires at the Fountain turn.

Trouble for St. Pete winner @BourdaisOnTrack. In the tires here in practice. pic.twitter.com/Tac42xNqHw

The Holmatro Safety Team pulled Bourdais back and restarted his car.  Bourdais then drove off to get back to the pits.  As you can see above, the car was not significantly damaged.  Bourdais would return to the track after minor repairs and ended up ninth fastest.

Qualifying for the 43rd Annual Toyota Grand Prix of Long Beach is scheduled for 3:30 p.m. PDT (6:30 p.m EST) Saturday.  The session will air live on NBCSN.