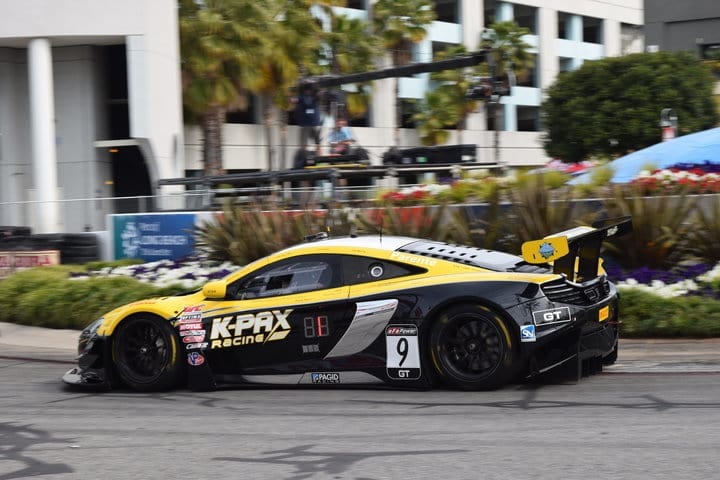 K-PAX Racing’s Alvaro Parente led flag-to-flag Sunday to claim victory in the Pirelli World Challenge GT/GTA race in Long Beach.  It is the second win of the season for the Portuguese McLaren factory racer and the second in a row for him at Long Beach.  Last year, Cadillac’s Johnny O’Connell actually won the race on-track, but was given an overboost penalty afterwards that gave Parente the win.

Parente was very pleased to repeat his victory.

“Definitely very happy to cross the finish line first this time,” Parente said after the race.  “The closest moment of the race was at the start with Patrick [Long] at the first [braking zone].  [Long] tried to go to the inside, but I was able to maintain my position. In the third sector, [Long] was faster than us, but we were faster in sectors one and two.  What a great race.”

However, Parente’s dominant performance was not the primary story.

Ten laps into the race, a street car crashed into a fire hydrant on Ocean Boulevard immediately to the north of Seaside Way.  A torrent of water rushed down and flowed over the track on Seaside Way.

Very unusual FCY: Water from a broken pipe run down the streets of Long Beach and flooded the track. #911GT3R @pLmotorsport still on P2. pic.twitter.com/aTQOvwaGjV

The race was red-flagged so that the hydrant could be shut off and the water removed from the track.  The cleanup took long enough that WC Vision officials added 15 minutes to the length of the race.

As everyone was on slick tires, the situation was quite dangerous.

“You’re really cooking down [Seaside Way],” GAINSCO/Bob Stallings Racing’s Jon Fogarty told Frontstretch after the race.  “Even running slow under caution, I was fully hydroplaning.  Could have been a big accident.  I’m glad that the corner workers were able to get the yellow flags out and warn everybody.”

As Parente stated above, the start was key.  Long attempted to make a move for the lead at the first corner.  Parente and Long went through the first corner side-by-side, but Parente was able to pull in front by the time the cars reached the fountain turn.

Behind the leaders, chaos broke out.  O’Connell ran in the back of RealTime Racing’s Peter Kox, damaging the No. 3 Cadillac ATS-V.R.  Despite shedding bodywork, O’Connell continued and actually made up a couple of spots.

After the red flag, Parente slowly but surely pulled away from the field.  Long was still in second while Parente’s teammate Bryan Sellers held onto third.  Further back, Fogarty and O’Connell had a great scrap for eighth late in the going.  With a couple of laps to go, Fogarty was able to get past O’Connell in turn 9.

A couple of turns later, Fogarty overshot the hairpin.  That allowed O’Connell and Magnus Racing’s Pierre Kaffer to get past.  For O’Connell, the good times came to an end about 15 seconds later when he got behind on his braking and went into the tires at turn 1.  O’Connell’s Cadillac ended up with even more damage, but would still finish 20th.

In GTA, GMG Racing’s James Sofronas started in 14th and avoided the trouble around him.  He was never seriously challenged on the way to the GTA victory and a 10th-place overall finish.  Wright Motorsports’ Michael Schein finished second in class, while Magnus Racing owner/driver John Potter was third.

The Pirelli World Challenge teams will take the next two weekends off before returning to action at VIRginia International Raceway at the end of the month.  That weekend will be the first Sprint-X weekend of the season as well as the season debut for the TC, TCA and TCB classes.

Unofficial Results for Pirelli World Challenge GT/GTA Classes Round No. 3 at Long Beach